December 17, 2015
Comedy Central has a collection of jokes on the internet. One of the jokes listed is about a premed student asking a physics professor why studying physics is important:


As a pre-med student at Washington University in St. Louis, I had to take a difficult class in physics. One day our professor was discussing a particularly complicated concept. A student rudely interrupted to ask, "Why do we have to learn this stuff?"
"To save lives." The professor responded quickly and continued the lecture.
A few minutes later, the same student spoke up again. "So how does physics save lives?" he persisted.
"It usually keeps the idiots like you out of medical school," replied the professor.

Recently, a candidate for president in the Philippines, Rodrigo Duterte, made the statement that Algebra be removed from the basic education curriculum.

However, near the end, the news article says:


Duterte said subjects such as Geometry and Physics would remain in the curriculum, as these are practical and useful in one’s daily life.

Realizing that both physics and geometry require algebra, Duterte's earlier statement that algebra should be removed therefore does not make sense. A study on workforce and college readiness shows that algebra is necessary for both college as well as for students who intend to work after high school:

The article also notes that Duterte had math anxiety and had failed in Economics. Yet, Duterte is suggesting to replace algebra with "business math". These conflicting statements are probably best deciphered with Duterte's own advice to journalists:

Joking or not, one should recall that DepEd's K to 12 curriculum was part of the presidential platform offered by the current administration. It is disconcerting when politicians shoot from the hip on issues that require expertise and research. Of course, politicians do this because people expect them to solve every single problem. Education is not one of the challenges that one president can face.

To address problems in basic education, the president must begin by putting the right people for direction and policies. One of the earlier posts on this blog shares an opinion from Flor Lacanilao. It is an opinion that is in fact supported by evidence from other countries. I am reposting it here to remind us of what is necessary:

Studies on education abroad have shown that the best way to improve basic education is to improve first higher education. And the best way to improve both is to put only the right people in charge. Right people refers to those who have made major contribution to one’s field, as shown by properly published research works (that is, following internationally accepted criteria). At present, none of those in charge in higher and basic education has such minimum requirement.

For basic education, the above prerequisite will insure that (a) program components are based on tested studies abroad, (b) curricular changes are based on properly published studies of local problems, and (c) thay have undergone trial runs or verification at selected schools before nationwide implementation.

[Dr. Flor Lacanilao obtained his Ph.D. (specialization in comparative endocrinology) from the University of California at Berkeley. He served as chairman of the Zoology Department at UP Diliman, chancellor of UP Visayas, and chief of SEAFDEC in Iloilo. Email florlaca@gmail.com]

My take on Duterte's statement:

Duterte is being sarcastic with his comments and the Philippine Star falls for it. Just a few days ago, Duterte said this to CNN Philippines, "...journalists from Metro Manila should undergo a briefing from Davao-based reporters to learn how to differentiate when he was joking and when he was serious with his statements." With this in mind, one could guess that Duterte did this to demonstrate how current policy makers in education have crafted the curriculum. Duterte's example is not far from how DepEd envisioned K to 12. Duterte's actual platform on education is this: 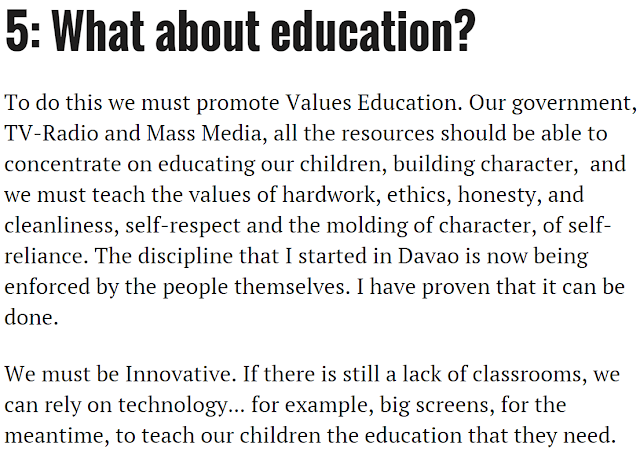