During the Christmas Eve mass I attended this year, the priest ended his homily with Linus' line: "That’s what Christmas is all about, Charlie Brown." The priest highlighted in his homily what was unique about the Christian faith: "God is with us". Peanuts creator Charles Schulz deciding against the advise of the show's producer and lead animator made Linus quote straight from bible when asked by Charlie Brown about what Christmas is really about:

"Fear not: for, behold, I bring you tidings of great joy, which shall be to all people. For unto you is born this day in the city of David a Saviour, which is Christ the Lord. And this shall be a sign unto you; Ye shall find the babe wrapped in swaddling clothes, lying in a manger. And suddenly there was with the angel a multitude of the heavenly host praising God, and saying, Glory to God in the highest, and on earth peace, good will toward men."


There are indeed so many instances in Schulz' cartoon that are quite insightful about religion. Jean Tedrow has a Pinterest board called Peanuts Theology, a collection of cartoon strips that touch on matters of faith. Here is one: 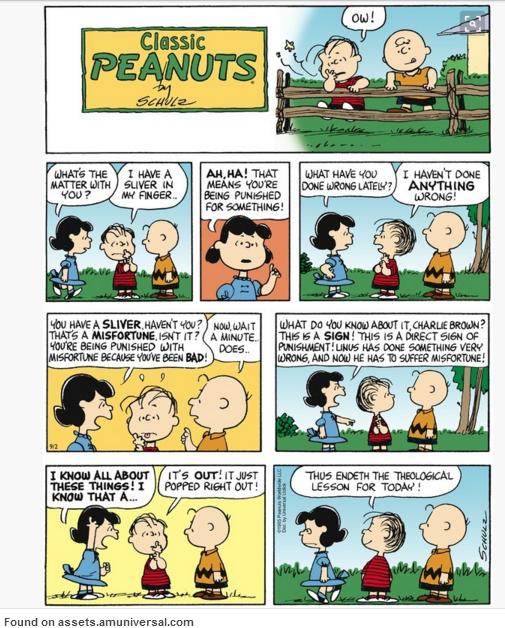 Lucy in the above cartoon strip is talking about a religion that is purely moralistic. The first three verses of John 9 say something about this:


As he went along, he saw a man blind from birth. His disciples asked him, "Rabbi,who sinned, this man or his parents, that he was born blind?" "Neither this man nor his parents sinned," said Jesus, "but this happened so that the work of God might be displayed in his life.

There is another time that Lucy raises something to think about: 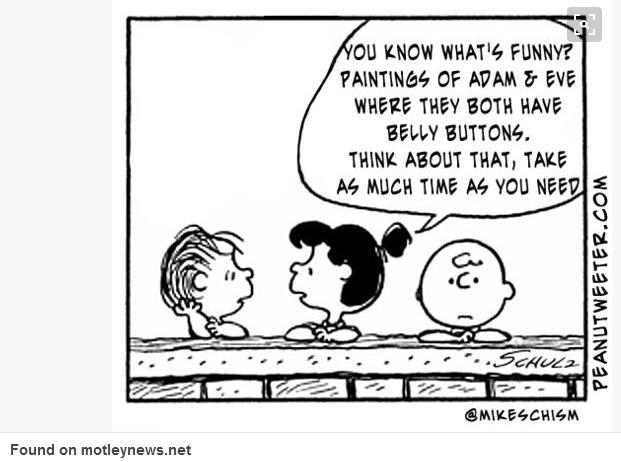 Our faith is supposed to provide us deeper meaning in our lives. Unfortunately, our beliefs sometimes go against what we see. The scientific theory of evolution and the belief in creation are often perceived as opposing views. One reason behind this dichotomy is perhaps our tendency to take a position. And in this case, there are actually more than two positions possible. In a recent article published in the Journal of Research in Science Teaching, Yasri and Mancy enumerate the following positions:

Yasri and Mancy are studying whether students (in their late teens) change their positions after receiving instruction on the theory of evolution. Initially, a significant number of students subscribe to Literal Creationism: All forms of life were first brought into being by a deity in more or less their present form at the same time. The results show that students do change their positions, but not their beliefs. The change happens because of a better understanding of the evidence as well as a deeper appreciation of the relationship or difference between science and religion. The majority of the students at the end of the instruction now hold the position of Agnostic evolution: Life emerged from non-living particles and then all current forms evolved from these earlier forms. A deity may exist, however, this is out of scope of evolutionary theory. Most of the students embrace the position in which science and faith are not in conflict.

Our beliefs could sometimes serve as real challenges to basic education. The study by Yasri and Mancy shows that this potential conflict must be taken into account. It is therefore important not to see things as black and white.

The priest during this Christmas Eve's homily also talked about how religions had utterly failed in teaching us good from evil. Our faith should really be beyond following a list of what to do and what not to do. And in the realm of the physical world, one's faith should also be beyond history and the origin of species.