Congestion in DepEd's K to 12

December 01, 2015
Congestion means overcrowding. In simple terms, there is too much in too little space or time. To avoid congestion one can either increase space or time, or reduce whatever is taking space or time. In introducing K to 12 to the Philippines, the Department of Education made the claim, "...the sad state of basic education can be partly attributed to the congested basic education curriculum." A closer examination of DepEd's K to 12, however, reveals not a decongestion, but a reduction of instructional hours across the first ten years of education.

Here are the changes for elementary school:

There is a reduction in both languages and mathematics of about 10 percent in instructional time. Below are the changes in secondary school:

Here, the decrease in instructional hours is even greater. Science, for instance suffers a 33 percent reduction. Adding two years to basic education may indeed look good on paper as a way of decongesting the curriculum. However, if the first ten years of basic education lose one third of instructional time, the senior high school years only mean catching up. One can think in terms of traffic, reducing instructional hours is the same as closing roads. Is this really a way to decongest?

A congested curriculum happens when too many subjects are squeezed into a short period of time. When I was a high school student, I went through a special science curriculum:
In my fourth year, I was taking two separate math subjects. One is an introduction to Calculus and the other is Linear Algebra. I was also enrolled in two separate science subjects: Advanced Chemistry and Advanced Physics. In addition to these, I had Social Studies, Pilipino, English, Retail Merchandising, Citizen Army Training, and Physical Education. Without the special science curriculum, other high schools only had one math and one science subject per year. Thus, it is quite clear that the following is not true: "the sad state of basic education can be partly attributed to the congested basic education curriculum." The reason is simple, the curriculum is not congested.

Worse, DepEd's K to 12, with its instructional hours, has probably brought congestion. Here is a recent post on a Facebook group page called PACE (Parents Advocacy for Children's Education): 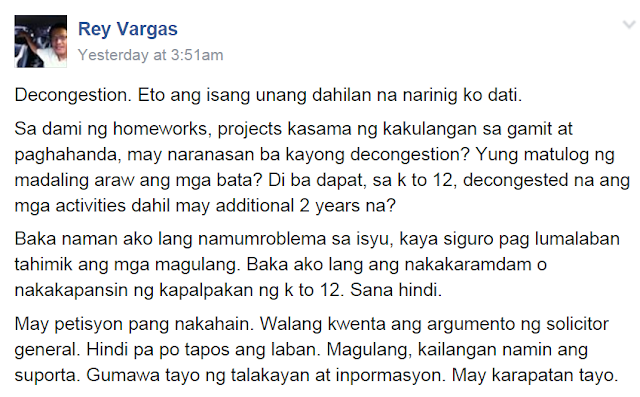 Vargas is saying that there is a considerable amount of homework and school children are forced to stay up all night. Vargas also laments that he is not hearing from other parents. Vargas hopes that he is not the only one who is seeing this problem. Do parents still care about the education and well-being of their children is perhaps one question in his mind.

And from Catholic educators, there is a recent news article from Davao Today: 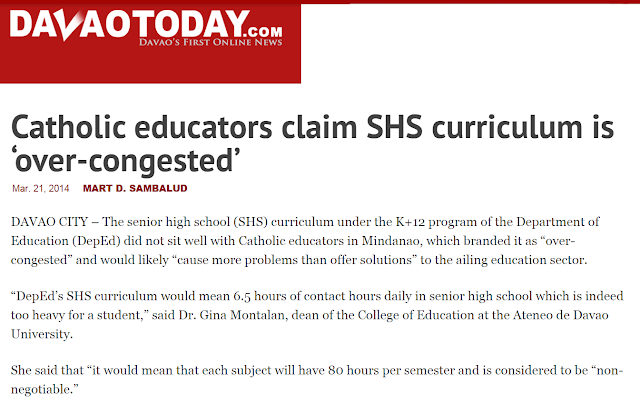 The math behind decongestion is really simple. And clearly, DepEd is using the term only as a sound bite.