July 07, 2015
The previous post in this blog, "When Is Feedback Helpful", where recent research showing that in education, knowing whether one is doing things correctly or not apparently helps only in the case where the learner knows nothing, has been highlighted, is quite disconcerting, especially with the observation that efficient systems often work with a feedback mechanism. Still, recognizing that improvements can only be made if there is assessment seems to dictate that feedback must be a good thing. What makes feedback helpful is therefore a good question to ask. The cited study in the previous post, "Feedback Both Helps and Hinders Learning: The CausalRole of Prior Knowledge", actually provides an answer to this question.

A part of the experiment was to ensure that the direct instruction worked:


Knowledge check. To ensure the knowledge manipulation worked, all children then solved a math equivalence problem on their own (i.e., 7 + 6 + 2 = 7 + __ ) and reported how they solved the problem... ...In the strategy-knowledge condition, children were told whether or not they solved the problem correctly. If they used an incorrect strategy, instruction on the equalize strategy was repeated and they were asked to solve another problem until they solved one using a correct strategy and received feedback that it was correct. This procedure ensured that children in the strategy-knowledge condition had knowledge of a correct strategy and were aware that they used it correctly. We set the protocol such that after five failed attempts the experiment was discontinued and children received more remedial tutoring.

Feedback is actually used here to inform the teacher. The information is used to guide what needs to be done. Goals are stated clearly. Depending on the feedback (whether a child solves the problem correctly or incorrectly) a specific action is taken. This is how a feedback mechanism in an efficient system works. The above actually illustrates some of the elements that Grant Wiggins regards as Feedback Essentials:


Feedback Essentials
Whether feedback is just there to be grasped or is provided by another person, helpful feedback is goal-referenced; tangible and transparent; actionable; user-friendly (specific and personalized); timely; ongoing; and consistent.

Wiggins also makes it clear that "the term feedback is often used to describe all kinds of comments made after the fact, including advice, praise, and evaluation. But none of these are feedback, strictly speaking."

Feedback, first and foremost, must be informative. "Good job" or "You got that right" carries unique information only if a learner is completely a novice. Otherwise, these remarks are really redundant. For these reasons, praises, judgments, evaluations or grades are not feedback.

As Wiggins noted, one can learn what good feedback entails from video games. My son, for instance, likes to play the game Injustice: Gods Among Us.


To those who are not familiar with this game, someone playing may simply appear as swiping one's fingers on a smartphone or android, but the following brief description from Wikia makes it clear that this game requires so much more.

Injustice for the mobile features different gameplay than it does on its console version, resembling more of a card battle game rather than it's "fight-style" console counterpart. Players collect characters in the form of cards and use them on 3v3 battles to defeat their opponents. The player starts with three random Bronze characters at the beginning of the game, and can get more characters by completing specific battles, buying them from the shop, or earning them as rewards from theChallenge Mode. Every character can level up, and buying more copies of characters allows you to promote them to Elite cards; every "Elite" on the character has bonuses towards Damage and Health. Character cards come in three rarities; Bronze, Silver and Gold. The higher the rarity, the better base stats come with the character. Each character has a "Passive Ability" which grants them a boost in gameplay for themselves or for the whole of the team. (For example: Superman Regime gains 50% more damage for 6 seconds at 40% health). They also have two Special Attacks which are unlocked at Levels 1 and 5 respectively. The higher the Special Attack, the more powerful it is. The first two Special Attacks can deal Special Effects such as Poison, Power Drain, Bleeding, Frozen, or Stun the opponent. The level 20 attack is a Super Move which is a High-Damaging UNBLOCKABLE Attack. Each battle has a requirement of "Energy" to use before a battle starts, as many as 1-3 Energy may be used for battles. Each character has 10 Energy slots that recharge over time. If a character lacks the energy to participate in a battle, the player must wait until it is recharged or use an Energy Consumable, which can be rewarded from matches or as daily rewards. Energy can also accumulate faster for cards with the purchase of a "Support Card" for each character found in the shop or from "Booster Packs". Cards that boost Health and Damage can be found as well.

There was no instruction manual and my son simply learned how to play the game while actually playing. Outcomes of battles and moves seen from opponents offered tangible and transparent feedback. There was no advice, no praise, no judgment, just information on how one might have lost or won a battle. My son even reviewed the characters to learn their abilities, strengths and weaknesses. Losing a battle allowed him to reexamine his team and make adjustments. Feedback was actionable and therefore useful.

Feedback occupies space in one's working memory. If feedback is neither informative nor actionable, then it is a waste of precious cognitive space. The following was recently displayed on Edutopia's facebook page: 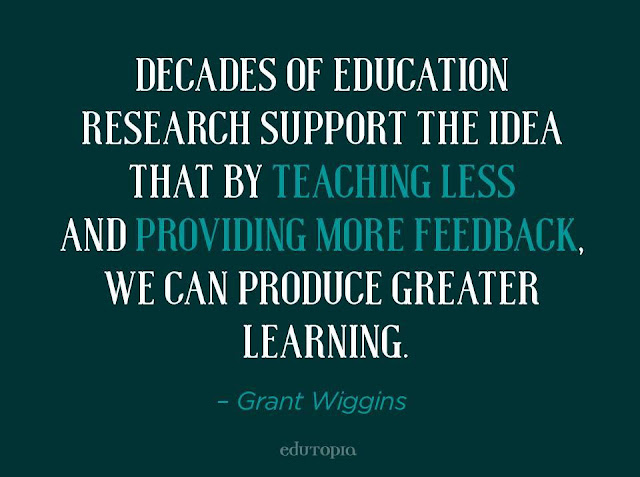 What the post above fails to convey is that true feedback is really teaching.