July 12, 2015
WBEZ and the Daily Herald have recently released a report that closely examines public schools in the state of Illinois. The report shows a strong correlation between poverty and test scores. This is of course not new. However, what is especially worth noting is the persistent grip of poverty on education. After a decade, the picture remains the same.

Comparing 2004 and 2014, even after a decade of No Child Left Behind, the situation remains more or less the same. Schools with a greater number of pupils from poor households have lower passing rates in standardized exams. The following excerpt summarizes the frustration expressed by the authors after seeing these results:

In fact, test score data in Illinois indicate that the degree to which poverty is tied to school performance is slightly stronger than it was a decade ago—despite reforms that have included school re-staffings, closures, consolidations, new state standards and more stringent guidelines for evaluating teachers.

It is therefore tempting to conclude that schools cannot really do anything about poverty. Even with all of these reform measures taken, the predicament remains the same, an achievement gap drawn by socio-economic status. It is quite appealing to explain the observed correlation to what wealthy parents can do for their children. For example, Larry Joseph, director of research at Voices for Illinois Children, explains this correlation by stating that “More affluent families can invest more resources in their children's development. Those investments include health care, adequate nutrition, early learning opportunities, home computers, dance lessons... summer camp, and safe and supportive neighborhoods. And also access to higher quality schools.”

Thus, is it true then that schools cannot really make a difference? To help answer this question, it maybe useful to look at a paper published in Social Forces in 2006, "Education and Inequalities of Place": 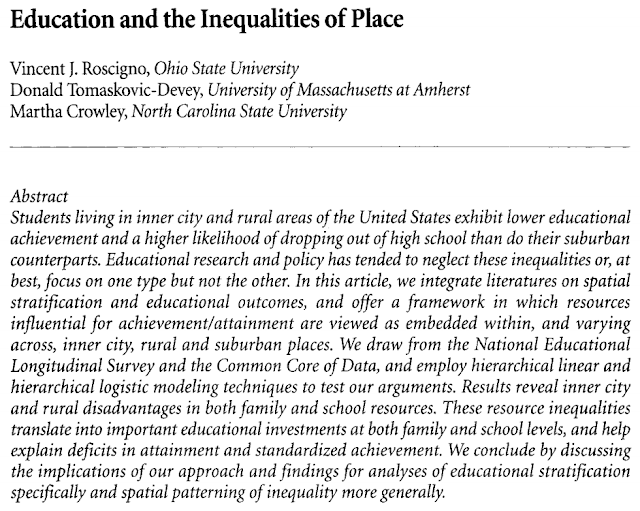 The inequality among households is apparently likewise present among schools. Schools that serve poor children are often lacking in resources. The graph below from Ushomirsky and Williams of the Education Trust shows Illinois (IL) as the top state in providing less funds to needy schools: 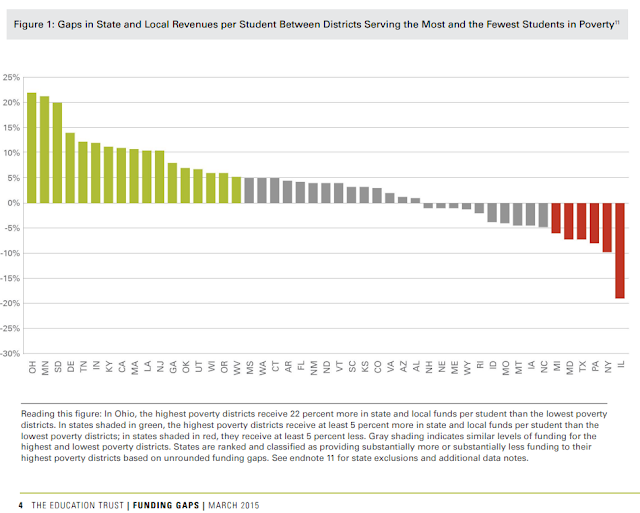 Ohio, the state on the opposite side of this scale, one that provides more funds to schools with higher poverty incidence, does have a different graph to show:

There is still a strong correlation between poverty and learning outcomes, but the slope is much less steep. In Illinois, wealthy schools have a score of 85 which goes down to 35 (less than half of 85) in high poverty incidence schools. In Ohio, schools predominantly attended by children from poor households are performing only 30 percent lower than schools with no poor pupils. One should also notice the larger spread of points as one goes to higher percentage of economically disadvantaged students. In fact, at the extreme, one finds a number of schools with very high poverty incidence but performing as well as those in rich neighborhoods, which is not observed in Illinois. Schools can therefore make a difference and resources count. Schools can either make these achievement gaps bigger or smaller. Teachers and principals cannot and should not use poverty as an excuse for failing to educate poor children.

Schools in the Philippines face similar challenges. The appropriate reform is not so much about shoving two additional years to high school. What is necessary is equity. Resources being channeled to where these are needed most is evidently a good first step.