Preference for the Poor

July 13, 2015
Poverty profoundly affects education. By providing greater funding to schools in poor neighborhoods, the state of Ohio seems to be narrowing the achievement gap caused by socio-economic status. It may seem obvious that, to improve public basic education, greater resources should be provided to schools that serve poor children. Lamentably, school reforms often miss the obvious. Again and again, changes in education frequently focus on curriculum, standards and accountability. Delivery and implementation are seldom placed on a spotlight.

Schools in poor neighborhoods are usually lacking in infrastructure. An article posted on the UNICEF Philippines website that cites the importance of water, sanitation and hygiene in schools says:


Schools in poor communities in the Philippines are the least served. A 2010 survey by the Department of Education (DepED) estimates that more than 7,000 primary schools have no steady water source and more than 90,000 school toilets need to be constructed to meet the basic standard.

With shortages in basic resources, it is indeed mind-boggling that DepEd's K to 12 focuses more on adding more to what schools should provide.  Asia's Catholic news source therefore has the following to say about DepEd's K to 12: 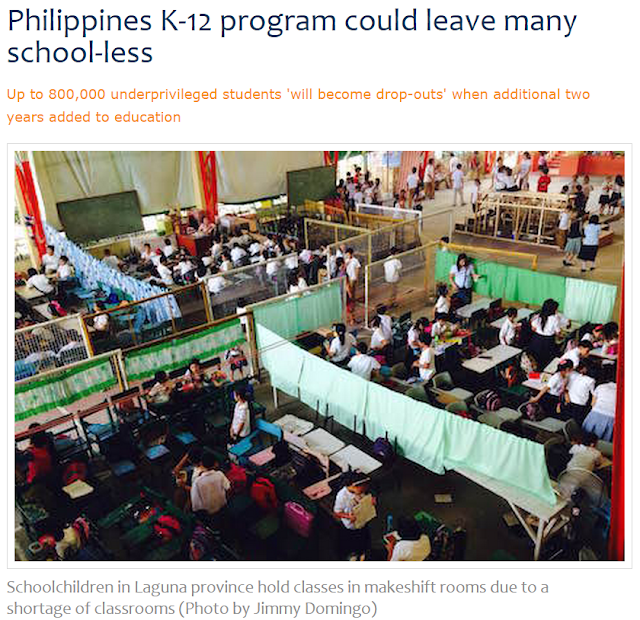 In a recent pastoral letter, the Catholic Bishop's Conference of the Philippines reminds DepEd of the following:

The word "realistically" perhaps is the most important word in the above paragraph. Preference for the poor requires at least a level playing field in education. K to 12 with its various tracks and haphazard implementation would only exacerbate the gap between rich and poor schools. K to 12 is not meant to serve the poor. Achievement gaps already exist even before a child enrolls in kindergarten. These gaps only increase and become insurmountable in the later years. An education reform that addresses the needs of the poor must focus on the primary years of education and ensure that resources are indeed channeled to where these are needed most.

The disparity, of course, actually goes beyond infrastructure. When it comes to the most influential factor in education, teachers, schools with poor children are also on the losing side. In a study scheduled to be published in the journal Educational Researcher, it has become evident that in the state of Washington in the United States, at all levels of basic education (elementary, middle and high school), disadvantaged students are taught by less experienced and low value-added teachers, and bottom performers in teaching licensure exams. 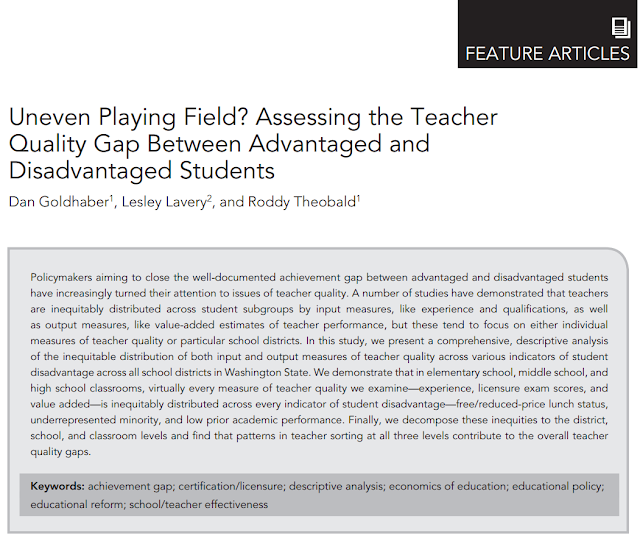 Goldhaber, one of the authors, provides a recommendation to address the above problem, "pay teachers more to teach in tougher schools, and you’ll lure better teachers to them". This may or may not work, but what is important at this point is to understand correctly the achievement gap in schools and what preference for the poor really entails.

It would be interesting to do a similar study in the Philippines. It would be greatly informative to find out how teachers in elite schools, those that educate children of politicians and business leaders, differ from those who teach in schools serving poor urban and rural communities, even if the answer already seems quite obvious. Reforms should address first these inequities. K to 12 does not. K to 12 only makes these differences even bigger.