What Do Numbers Really Tell Us?

May 31, 2015
Mark Twain popularized the statement, "There are three kinds of lies: lies, damn lies, and statistics". In Truth, Damn Truth, and Statistics, Paul Velleman of Cornell University reminds us of a "world outside ourselves". There are facts that sometime do not seem to apply to what we experience. It is at this point that we must realize that each one of us may just be a single point in a larger picture. Statistics does provide a window that helps us see beyond ourselves, but we still need to be vigilant since we often view only what we would like to see. Tomorrow, schools open in the Philippines. Besides what each parent and child might experience, there would be stories, there would be numbers which some of us might be able to relate while some might paint an entirely different universe. There are those who attend elite schools and for these children, the classroom they would see tomorrow could be inviting. Yet, there are also schools that yet have to recover from a previous typhoon. It is important in our search for what is truly the state of Philippine basic education that we do not allow ourselves to deal with data from which we could freely choose. Statistics can help, but not when we already have our minds already set.

With the start of school, here are some numbers from the Kabataan partylist: 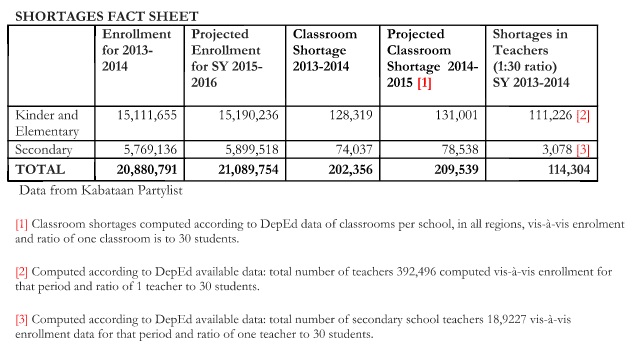 The additional years in high school are not yet scheduled to begin this coming school year, yet the shortages in both classrooms and teachers are huge according to this data compilation. If a parent sends a child to a school that is well-equipped and fully staffed, these numbers may seem phony. But these numbers speak of the larger picture. One should likewise take note that the current pupil:teacher ratio in Philippine schools is much higher than 30. Thus, the number of teachers needed shown above does make sense. The same applies to classrooms especially when one takes into account that classrooms are overcrowded and multiple shifts are still employed in some schools. It does seem that the above numbers are chosen to prove a point. One must keep in mind, however, that the point here is to show what is basically necessary to provide quality basic education.

There is a photo from a Facebook user named Raf M G Santillan: 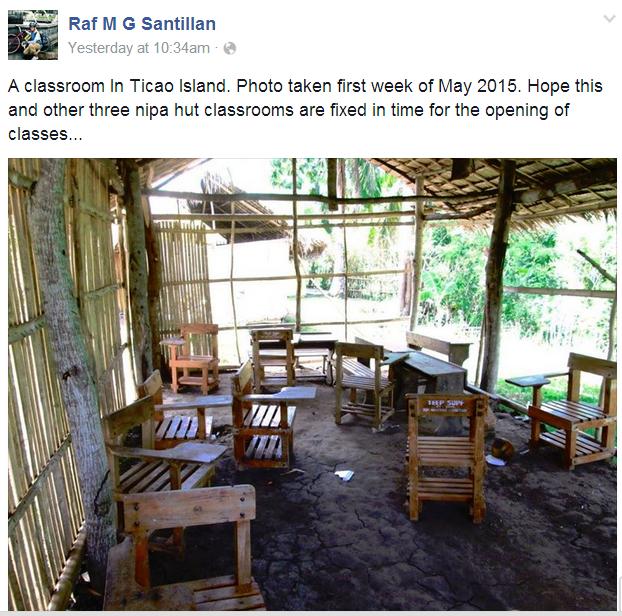 The message here is clear. This is a picture of a classroom that requires attention and Santillan does hope that this classroom and others get fixed before school starts. It maybe an isolated case but it does not take away the fact that this particular school needs help. Numbers like the ones shown in the previous table as well as the above photograph help inform us. Some may point out that there is also a second purpose - that is, to demonstrate that the Department of Education in the Philippines is once again unprepared to meet the needs of schools in the Philippines. Whether one actually subscribes to that does not matter when facing the plain truth that some schools in the Philippines still require much-needed resources.

While the debate regarding the new curriculum continues, there are numbers that have recently shown up in the news. These numbers are from the Philippine Institute for Development Studies (PIDS). Some newspapers are quick to trumpet an assumed achievement of DepEd K to 12. Rappler, for example, reports with the headline, "Out-of-school kids bolstered by education reforms, CCTs". This conclusion is apparently based on the following data:

Across all income groups, it is indeed obvious that attendance rates have jumped up in 2013 compared to 2008. It is important to note, however, that the above are school attendance rates in kindergarten. With the Enhanced Basic Education Act, kindergarten is now compulsory so it should not be surprising that with the new law, parents are now sending their children to kindergarten. The more relevant piece of data to gauge universal education is not the attendance rate by 5-year old children, but the survival rate. This is likewise available in the PIDS report:

And here, it is obvious that it is really too early to assess how DepEd's K to 12 is affecting the rate of school leaving in the Philippines. Next year would be important since Grade 11 is going to be offered for the first time. One still has to wait and see, but with available data, one may still make a reasonable projection. Here is one, coming from the Kabataan partylist: 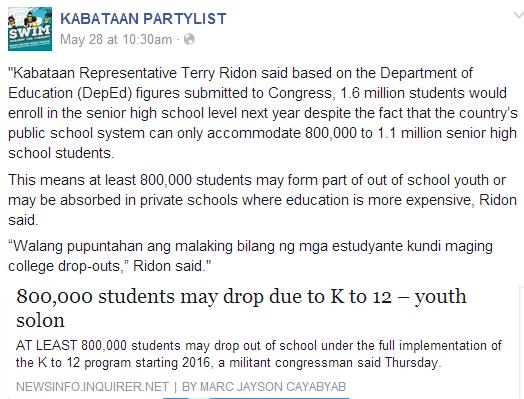 Numbers inform us. Whether the data strengthen our position in the debate on DepEd's K to 12 is really irrelevant especially when the numbers are simply telling us to please pay attention to the needs of Philippine basic education.