DepEd's K to 12: "Stop the School Bus" or "Damn the torpedoes; full speed ahead!"

May 28, 2015
Education reforms that are not supported by evidence can have serious and negative ramifications on both students and teachers. Wrong measures are unfortunately never innocuous. Proponents of DepEd's K to 12 must go beyond reciting platitudes and making outrageous promises. A reality check is now more than ever imperative. The mere fact that the new curriculum has already been in place for the past three years can never justify a continuation on the same misguided path. Of course, the right time to stop DepEd's K to 12 was three years ago but this does not mean that it is no longer correct to dump a wrong curriculum. Yesterday was better, but today is still a gazillion times more desirable than tomorrow or never.

In addition to the intrinsic weaknesses of the curriculum and the low quality and availability of learning materials, the following only demonstrate how utterly unprepared the government is in implementing the K to 12 curriculum.


It should not be surprising then to see a third petition to the Supreme Court asking for the suspension of K to 12. Below is a screen capture of BusinessWorldOnline: 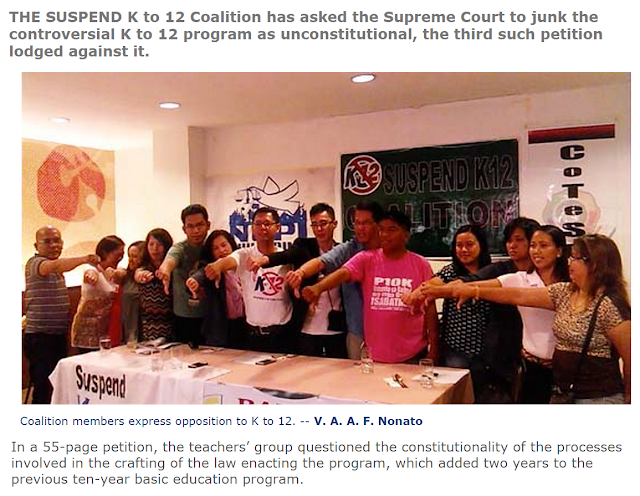 As a defense, proponents of K to 12 are asking for what the alternatives are, as if it is not intrinsically good to stop something that is bad. As Gerald Tirozzi, an education leader in the United States, points out, there are two choices: "Stop the School Bus" or "Damn the torpedoes; full speed ahead!". Gerald Tirozzi is a former Assistant Secretary of Elementary and Secondary Education at the U.S. Department of Education and author of the following book: 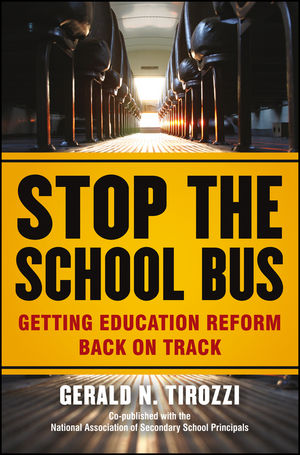 Similar to Tirozzi, the critics of DepEd's K to 12 have recommendations that go beyond simply suspending the new curriculum. In fact, most critics are imploring for prioritizing instead the basic needs of education: classrooms, learning materials, and working conditions of teachers. Proponents continue to deny that these shortages can be met while implementing the new curriculum. Again, a reality check is a must.

We could also learn from Tirozzi. There is a site on the web called Five Things - "a collection of personal reflections from education leaders devoted to improving the fortunes of others through learning." Tirozzi's entries are as follows:
The salaries and working conditions of teachers in the Philippines must be addressed first otherwise the much needed elevation of the teaching profession would never happen. Opponents of K to 12 have been saying this even before K to 12. The reform must really come from the classrooms, from the teachers. A dictated top-down reform has no chance of being implemented correctly. "Proficiency for all", like any sound bite in education reform, is really meaningless. Proponents should not use a wish list to promote a curriculum. A curriculum can be considered good not because of the promises it makes but because of the promises it delivers. Basic education is really much more than preparing for either employment or college education. Opponents of K to 12 are asking for a curriculum that does not promote labor export but one that advances a productive membership in Philippine society. Kindergarten and the early years need all the attention and resources the government can provide. Failure in these years can not be addressed by additional years in high school. Clearly, there are so many alternatives that directly address the problems Philippine basic education faces. These alternatives are in the right direction and, at the same time, will avoid those damn torpedoes.