From Hitler to Prophets of Doom

May 26, 2015
The posts I have been seeing on Facebook do not paint a good picture of how we are responding to the nagging challenges of basic education in the Philippines. The Alliance of Concerned Teachers has now likened the management style of DepEd secretary Luistro to that of Hitler while Luistro apparently has been quoted by Radio Veritas as calling critics of the new curriculum "prophets of doom". The issues plaguing Philippine basic education warrant a serious reflection from both sides. The discussion really needs to be elevated to a higher level, one that actually weighs the merits and weaknesses of both arguments. 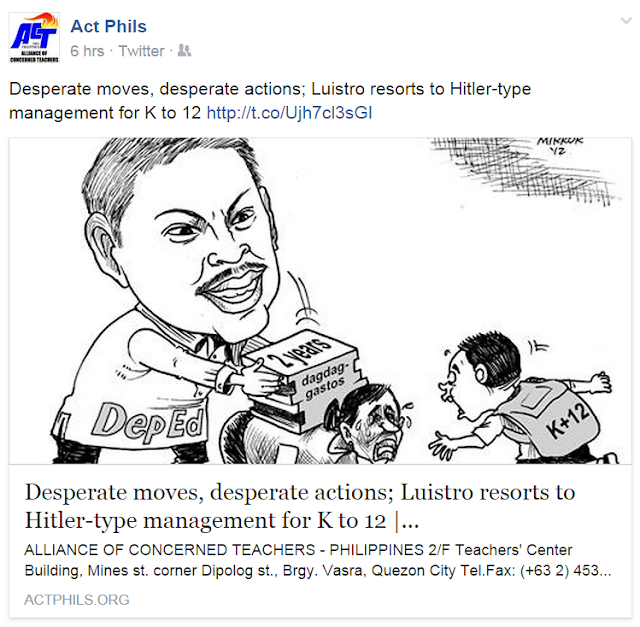 The lack of seriousness in dealing with the real problems of basic education is unfortunately matched by how clueless most of the public are with regard to the new curriculum. Such is illustrated in the following letter from concerned parents of students enrolled in Manila Science High School:


I am an alumnus of Manila Science High School and to me, it was clear from the very beginning of the phased implementation of DepEd's K to 12 that the curriculum would be drastically different from what I went through. The spiral progression in the math and the sciences alone is incompatible with the old special science curriculum that I took during which I was taking for example full-year courses of chemistry and physics simultaneously as well as linear algebra and calculus. DepEd's K to 12 assigns a spiral approach to earth science, biology, chemistry and physics during the first four years of high school. It is only in the additional two years of high school where a strand especially designed for the sciences becomes available in one of the tracks.

A major part of the misinformation regarding DepEd's K to 12 is its narrowed focus on the two additional years. Even the letter above from the parents illustrates how much the public fails to see that the new curriculum really starts at kindergarten. Drastic changes have already occurred for the past three years. Those changes include a spiral progression in all subjects, short instructional hours, mother-tongue based multilingual education, and discovery-based learning. Children are now taught oral fluency only in the first-grade as noted on a post on this blog a couple of years ago: 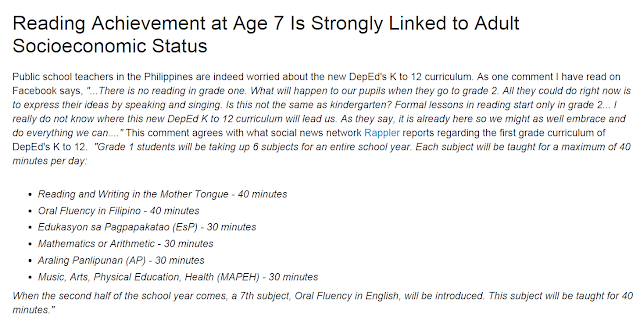 And sadly, one can add the following ingredient to this hopeless mix. Those who actually have the influence or power are able to send their own children to schools that do not follow DepEd's K to 12. The following is a book list from a private school in the Philippines for the first grade:

Unlike children enrolled in DepEd's public schools, students in this school are already being taught to read in English. They even have science in first grade.

Philippine basic education would continue to have Hitler and "prophets of doom" if the discussion is not elevated into one that tackles what is really going on inside classrooms. The problems can be solved but not with propaganda or by coaxing teachers, students, and parents to sign a pro-K to 12 document. The problems can only be faced properly by looking at the evidence from the ground while being guided by published research.