The Voice of Parents

April 28, 2015
It was back in February of 2012 that I received an email from the mayor of a town that is not too far from Manila. The email said, "Just a bit of news: I attended the welcome party for the new District Supervisor and I was really surprised that she and the other supervisor are not aware of the proposed extended years for high school. They said they heard something about it but no definite instructions yet. I told them that according to the news these will be implemented in 2012 school year."

I first heard of planned curriculum revisions in basic education in the Philippines during the later months of 2011. I even volunteered to assist but only received one short response from someone in DepEd. The next thing that happened was reading in the news in January of 2012 that the K+12 curriculum was already about to be implemented. Thus, it was interesting to note that a few months before the implementation, a district supervisor was not informed of the new curriculum. And if a district supervisor is not aware, how much more uninformed would the parents be?

The Philippine Constitution recognizes the role of parents in rearing their children. The Constitution specifically states within its article on education, "Without limiting the natural right of parents to rear their children, elementary education is compulsory for all children of school age." The Enhanced Basic Education Act of 2013 also mentions the role of parents in curriculum development by including parents-teachers associations as among those groups DepEd needs to consult. Unfortunately, the same act fails to include parents in the review and evaluation of the implementation of the basic education curriculum.

Since K+12 is implemented in stages, it is not surprising that parents seem to be delayed in their reaction to the new curriculum. After all, the additional two years are still yet to happen. But those years are now getting closer. Consultation in a process is difficult to quantify, but how much the public is informed can be measured. How much the public understands the new curriculum can be gauged. One can browse through discussion threads and evaluate how informed the comments are. Parents themselves can likewise attest to whether they have been consulted or not. The following post from Rey Vargas of PACE (Parents Advocacy for Children's Education) is highly informative: 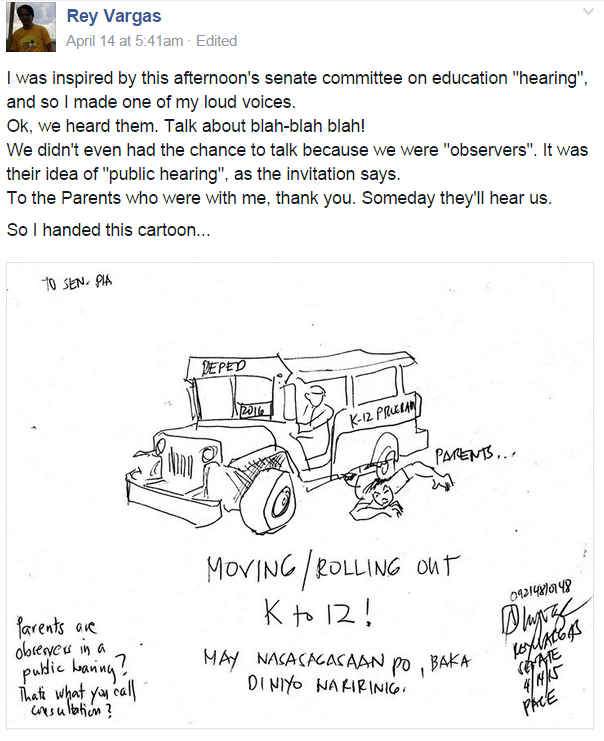 There is a new colored version: 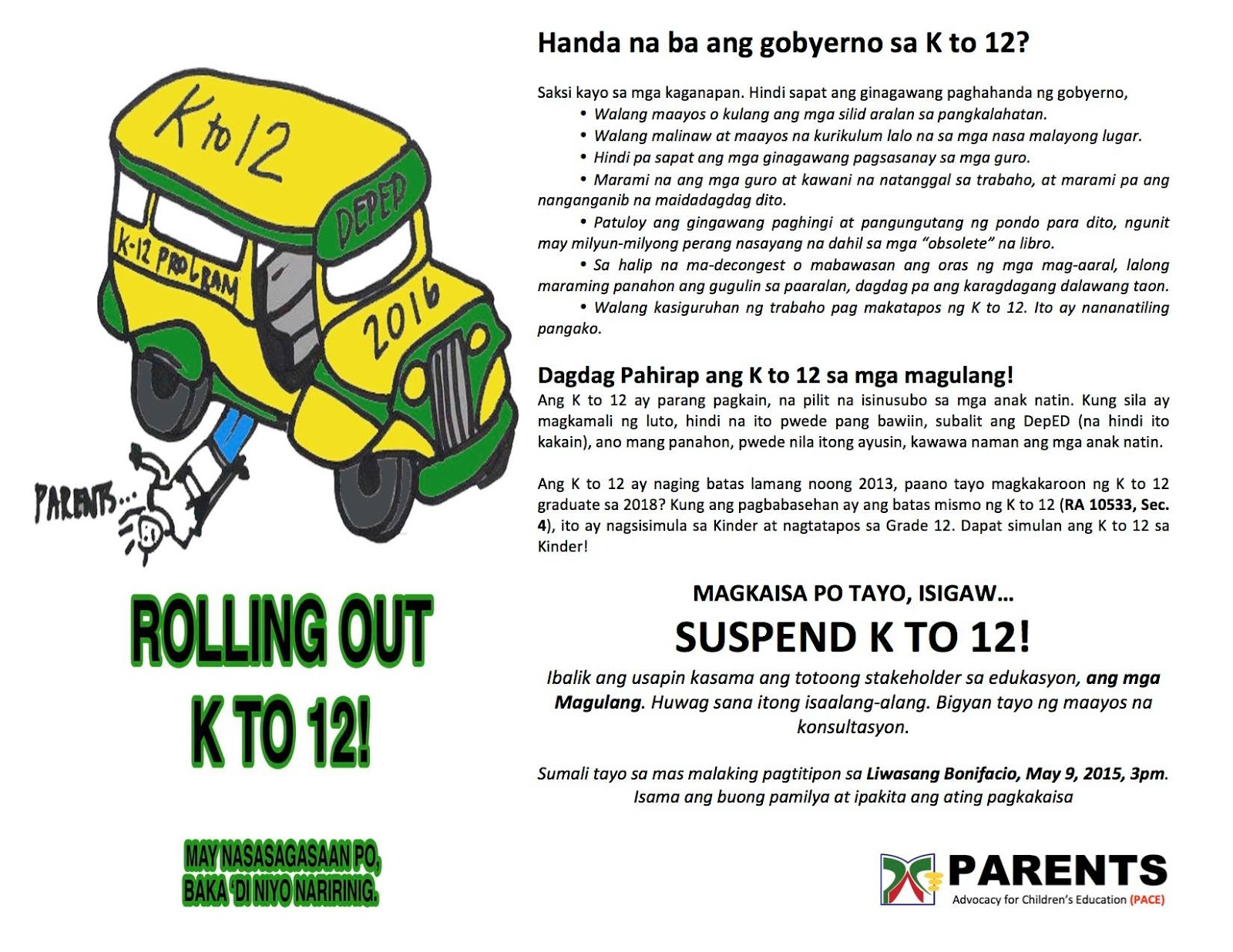 Being mere "observers" is not being consulted.

The province of Ontario in Canada is likewise currently involved in a curriculum revision, although much smaller in scale and range compared to DepEd's K+12. The revision only involves sex education. Still, the curriculum scheduled to be implemented in September 2015, has received plenty of criticisms from parents. To appease parents, the Globe and Mall reported in October 2014:


"The Ministry of Education announced Wednesday that it was going to survey one parent at every elementary school across the province – approximately 4,000 parents - on the appropriate ages to introduce sensitive topics. The consultations will inform a “relevant and age-appropriate” Health and Physical Education curriculum that will be introduced to classrooms next fall, according to a government press release."

One parent from each school was consulted. It is then not surprising to see the following page rise recently on Facebook:

The new Ontario curriculum is actually not that new. It was first introduced in early 2010.

Consultation as mentioned in laws often refers to drawing input from the public, by way of suggestions and comments, on a proposed policy or legislation that may affect them. Consultation is therefore not an easy process if the public does not understand or is not even aware of the proposed policy. It is impossible for the public to comment on how a policy would affect them if they are not informed. How a policy affects them is also hard to imagine unless the changes are so imminent. The public is hardly known for its lack of procrastination. These difficulties, however, do not absolve the government of its responsibility to consult stakeholders. And in the case of the Philippines, what happened on the Senate floor as described by Ray Vargas clearly demonstrates the lack of consultation on DepEd's K+12. Perhaps, the Senate is merely following the law which does not explicitly include parents and teachers in consulting when it comes to the implementation of the new curriculum.