What Does "Education For All" Really Mean?

October 01, 2014
Simply because someone has the perception that schools in their neighborhood are doing great does not necessarily hold water. It is the preponderance of subjectivity that makes it necessary to embrace common standards. There must be objective measures that go beyond our opinions. Take, for instance, the results of a Gallup Poll in 2010 that shows parents in the United States are overwhelmingly happy with the schools their children attend but generally unhappy with schools nationwide: 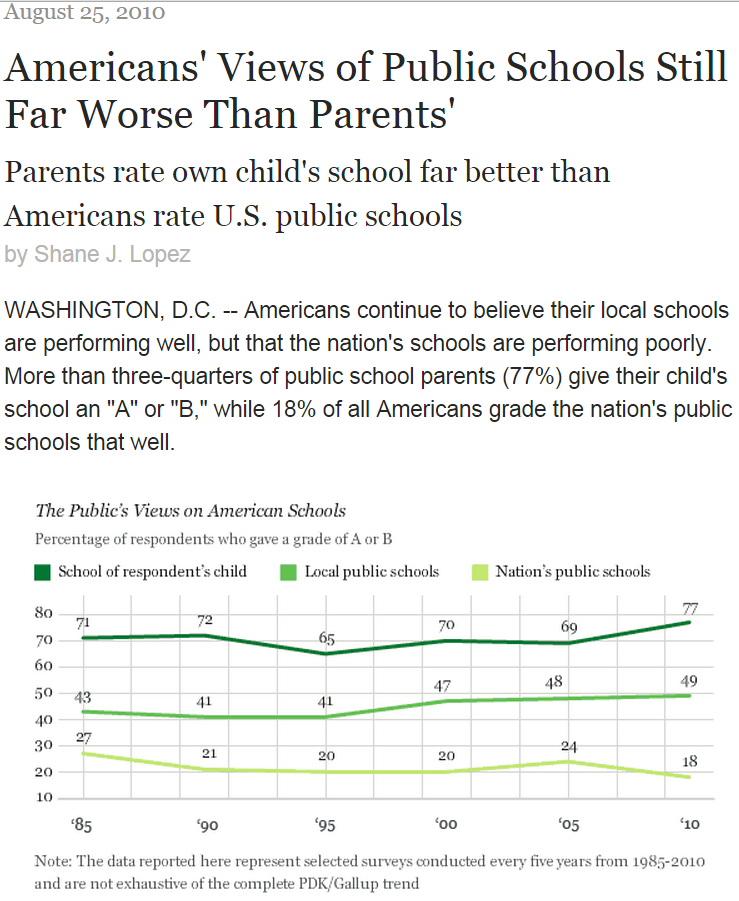 Looking at the graph, it does appear inconsistent that 77 percent of parents rate their schools as good while nationwide the same parents think only 18 percent pass that mark. Thus, being a resident of Fairfax county, my perception of how good schools are in my district needs to be backed by evidence. Just reading that the school my children attend says that their mission is "to ensure high levels of learning for all" is not enough. The school must actually make good on its promise. How can one tell? Whether we like it or not, this is where standardized measures play quite an important role.

Here are some measures that are useful:

Since ten high schools in Fairfax county participated in the Programme for International Student Assessment (PISA) 2012, comparisons can be made. Fairfax county scores are well above the average scores of students in the US. And the scores are similar to the top ranking countries:

The numbers above are average scores. It may tell something about the education of children in Fairfax county, but it does not provide the real score on "education for all". On the other hand, the state of Virginia administers Standards of Learning (SOL) tests:

SOL tests in reading, writing, mathematics, science and history/social science measure the success of students in meeting the Board of Education’s expectations for learning and achievement. All items on SOL tests are reviewed by Virginia classroom teachers for accuracy and fairness and teachers also assist the state Board of Education in setting proficiency standards for the tests.

Here, the reports that are made public are not the average scores, but the percentage of students passing the exam. This number is therefore more in line with gauging "education for all". For example, here are the numbers for Mason Crest elementary school for third grade:

Mason Crest Elementary School, like other public schools, is not selective in its enrollment. In fact, based on the “Developmental Reading Assessment, Edition 2, Word Analysis” (DRA2 WA), 25 percent of kindergarten pupils at Mason Crest are referred to an Early Intervention Reading Initiative program. The state average for this assessment is 16%. Thus, Mason Crest actually starts right at the beginning with a major challenge. Mason Crest likewise has to address achievement gaps (socio-economic status and ethnicity):

Thus, if I say that Mason Crest Elementary School is a school that is true to its mission - I am saying that with evidence....


Commentaries Data and Statistics Education for All Evidence-Based Research