Medium of Instruction and Science Learning

October 23, 2014
Apparently in Chinese, a single word can be used to convey either "heat" or hot":

This obviously could be confusing to a high school student who is trying to learn fundamental physics in Chinese. Science learning does require much more than just grasping concepts. Science requires a certain precision in academic language. Even in English, force and power may seem interchangeable in everyday conversations, but in physics, these two correspond to two distinct quantities. Hence, the question of how the medium of instruction affects science learning is an important issue to address especially now that most learning resources for the sciences are in English. 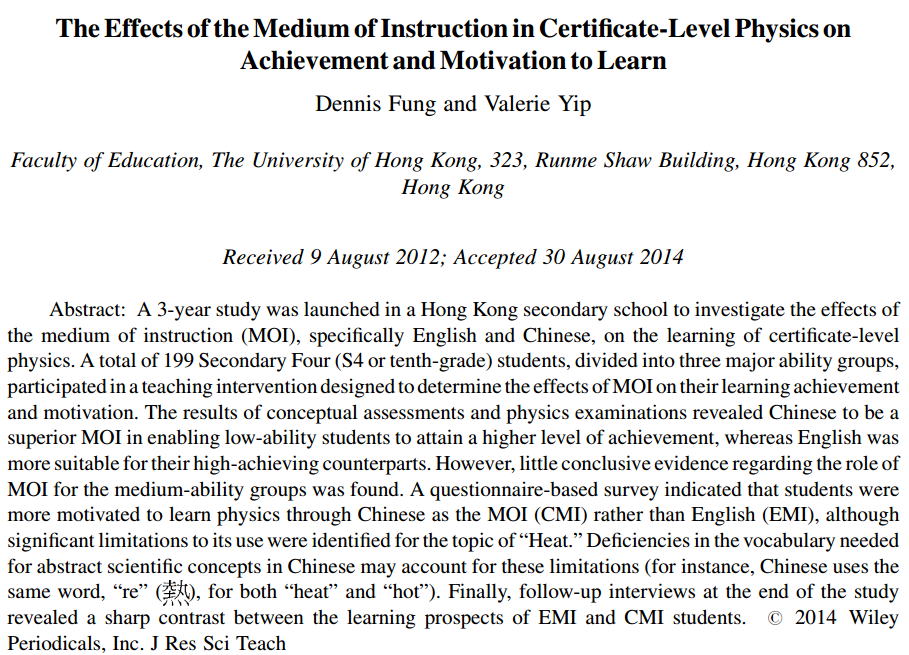 Albeit the authors seem to emphasize that Chinese seems to be a better medium of instruction in enabling low-ability students, this appears to apply only on one of the topics covered, forces. When it comes to heat or thermal concepts, the results do not really support this conclusion:
In the above figure CMI corresponds to Chinese as medium of instruction while EMI corresponds to English. Since a pre-test is provided, the students can be initially grouped according to initial ability at the end of junior high school (where only the general sciences have been covered with everyone using Chinese as the medium of instruction). Clearly, as the authors have also presented in the paper, when differences are examined, EMI provides higher improvement for both "middle" and "high-ability" students, and there is really no difference between CMI and EMI with regard to students who perform poorly in the pre-test:
The above results are indeed telling. More importantly, an interview has also been performed by Fung and Yip, and one specific issue that comes out is a question often raised by students who are in the physics class that uses Chinese as medium of instruction. It is in fact more of a comment than a question: How will they perform in college where physics is exclusively taught in English? It is an appropriate question to ask. Unfortunately, their answer perhaps is to dismiss simply physics as a future course to take.