How Much Does It Cost to Raise a Child?

October 17, 2014
How much raising a child would cost depends of course on where you live. In the United States, the Department of Agriculture (USDA) recently released a report that estimates how much currently rearing a child costs. The numbers range between $12,800 and $14,970 annually. A family of four children should expect to spend less, as the average goes down by about 22% per child, but the numbers are still quite substantial, about $40,000 per year. A family with four children earning an annual household income (before tax) of $60,000 clearly has to exercise tight budgeting.

The following is an infographic from the USDA summarizing the report: 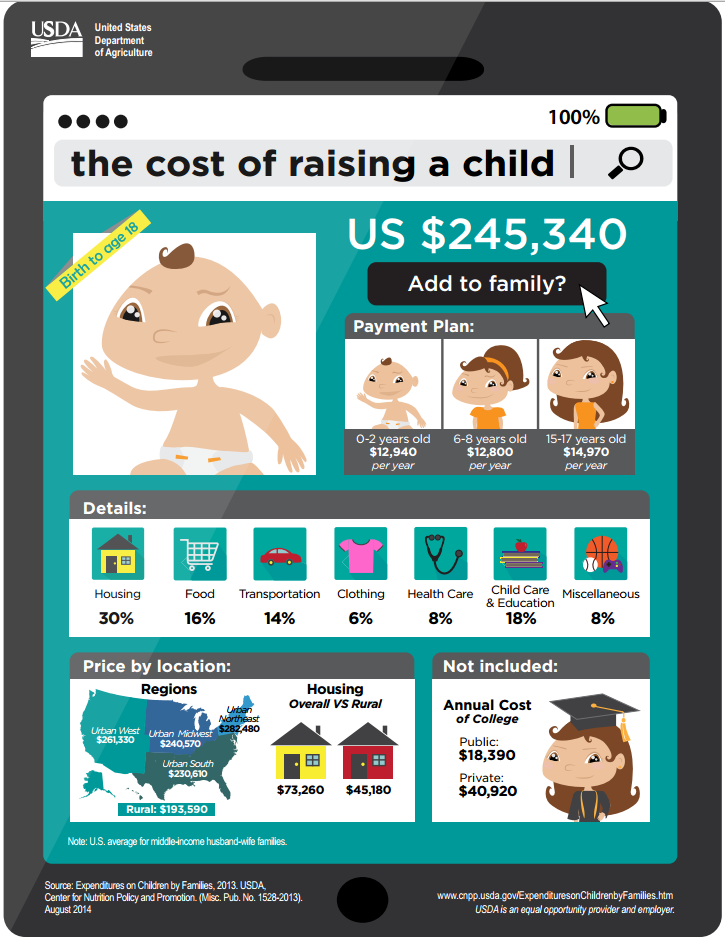 Raising a child from birth to age 18 (before college) costs $245,340. This is the average. Raising a child in a rural area is cheaper, but still requires $193,590. These numbers should not be surprising however. Child care, for example, in Fairfax county costs about $250 per child per week. This alone costs over $10,000 per year. Even with free tuition in public schools, increasing costs in transportation, food, health care, housing, and clothing, can easily replace the costs of daycare (shown in the following graph).

Those who could spend more would naturally spend more on their children. Here are the estimates for children born in 2013 for households at different income levels:

A wealthy family is expected to spend half a million dollars to raise a child from 0 to 17. And that is before college. The total expenditure from birth through college can easily surpass one million dollars. This means that in order to raise two children through college, my household needs to earn at least $2,000,000 in about two decades. (about $100,000 annually) And that is for child support only. These numbers place in a correct perspective what responsible parenting entails.

Comparing against child expenditures in 1960, Americans have only increased child costs by 24 percent.

However, there are dramatic changes regarding where expenses are made. Food has become cheaper because of great improvements in agriculture, but education and child care have increased significantly. It has risen by 800 percent.

The new K+12 curriculum in the Philippines should not be taken as a minor burden on Filipino families. Properly raising and supporting a child requires not only time and effort, but real money. These are real costs, which should be taken into account, especially when the benefits are highly unlikely to be realized.