Taking "Pygmalion" to an Extreme

October 08, 2014
Last night, my children were watching an episode of Clarence on CartoonNetwork, "Quill or Crayon". A standardized test was administered and was used to divide a class of students into two groups. Students who scored above average in the test were assigned to the "Quill" group and those who scored below average were placed in the "crayon" group. The "Quill" group was characterized by order and obviously higher academic standards while the "Crayon" group was disorganized and taught by a "not so good" teacher. Jeff, the central character in the show, scored average on the test and was placed in the "Crayon" group. The rest of the episode simply showed the nightmare Jeff had to go through while spending time in the "Crayon" group and, at the same time, continuously longing and insisting to belong instead to the "Quill" group.

There is no argument that how and what we teach children can affect their learning. Unfortunately, some have equated the how and what with what we should expect. And that expectation is usually summarized as a set of standards or curriculum. Thereafter, the expectation is believed to be a self-fulfilling prophecy.  This is the Pygmalion effect (the higher the standards, the better students would perform) and its corollary, the golem effect  (low expectations lead to a decrease in performance). This way of thinking is illustrated, for instance, in a research paper from the Center for American Progress: 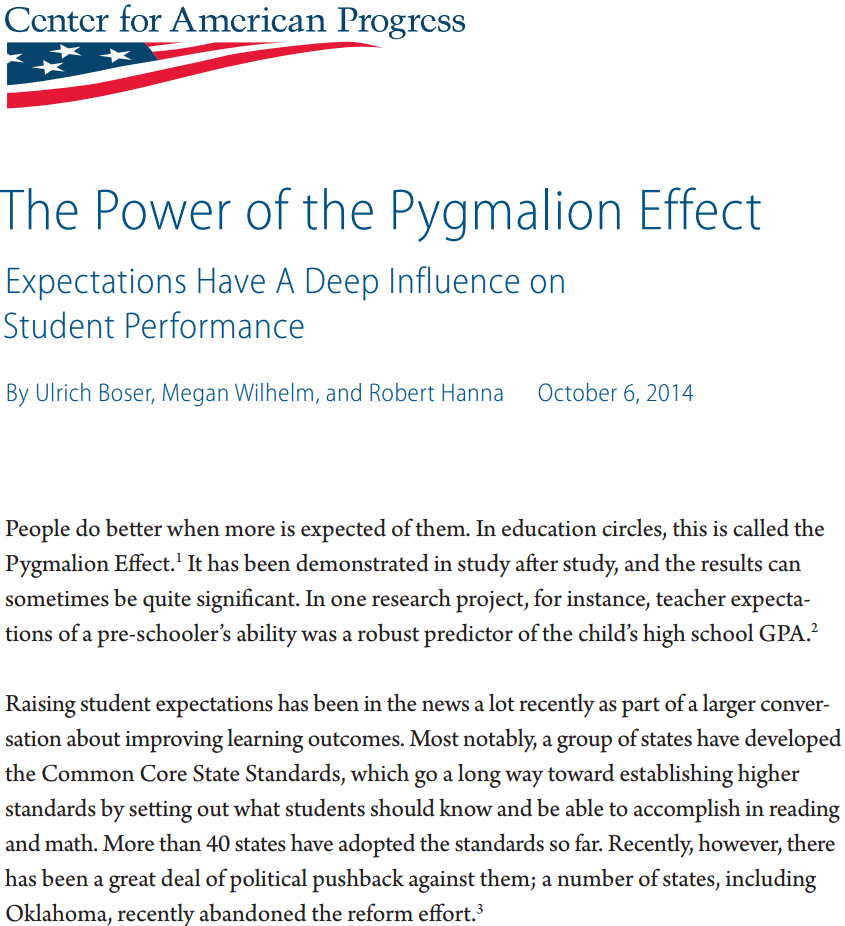 First, the authors of the above paper seem to be quite certain of what studies on the Pygmalion effect actually show. This is incorrect since most of the studies are not conclusive with regard to a causal relationship between expectations and performance. Take, for instance, the study cited at the end of the first paragraph above:

Boser and coworkers are in fact stretching what Alvidrez and Weinstein have found in their research. One simply has to take note of one very important sentence that Alvidrex and Weinstein wrote in their conclusion, "Whether these relationships are prescient or influential cannot be answered by naturalistic studies like this." The fact that the level of expectations correlates with the level of performance does not necessarily mean that increasing expectations will lead to higher performance. Lee Jussim at Education.com writes a more thoughtful and carefully worded summation of the studies on the Pygmalion effect in Teacher Expectations:


First, teachers should take considerable comfort from the empirical evidence which, in contrast to some of the more extreme claims, shows that, in general, expectancy effects are small, fragile, and fleeting, rather than large, pervasive, and enduring. Second, any recommendation suggesting that teachers should simply adopt high expectations for all students would be oversimplified, unworkable, and probably dysfunctional. High expectations can work at raising student achievement, but only if they are backed up with the resources and institutional supports to do so.

Teachers, like other human beings, can learn from experience. Year after year, they spend hundreds of days with their pupils. A teacher becomes much more than just acquainted with his or her students. It is thus incorrect to assume that a teachers' impression of a student has no basis. Of course, some impressions may be wrong, biased or incomplete. For this reason, the correlation is not perfect, but it does not discount the fact that the correlation between expectation and performance is simply due to a valid judgment. We cannot take away from teachers their ability to evaluate their students.

Expectations can indeed be influential, but only as far as how a teacher acts based on these expectations. The effects therefore have to be small especially if one considers the other countless factors that may affect learning. To think that the Common Core is a good standard because it raises expectations is wrong-headed. The strength of the Common Core lies in the fact that states now share the same goals for basic education. A set of standards consistent from state to state helps promote equity in education. Its quality can not be gauged by whether it promotes high or low expectations, but should be gauged in terms of being realistic, practical and appropriate.

One can easily make "sky is the limit" expectations. For instance, why not teach "quantum theory" in first grade of elementary school after teaching calculus in kindergarten? Of course, this is ridiculous. It is neither realistic nor appropriate. Ridiculous, unfortunately, does not necessarily mean that such inappropriate or unrealistic standards do not exist. Wrongly placed high expectations can exist especially when one subscribes to the wrong mantra, Simply raising expectations will lead to better student performance. Sadly, the Philippines' DepEd K+12 curriculum, as pointed out on this blog in a comment, is an example:

Carlo Cruz III has left a new comment on your post "Motivated to Learn Science":
Hi Sir-
Please read through the EPP curriculum (ICT part) for grade schools and you will be shocked. How can they implement this if most of the schools in the provinces don't have a single computer, or worse electricity?
Link to EPP curriculum

What Carlos Cruz III points out is that the learning competencies expected from elementary school students are unrealistic. In the new curriculum, grade 4 students are expected:
At least, posting messages on Facebook will have to wait until Grade 5. Well, Facebook does restrict its membership to individuals who are at least 13 years old. It is really easy to relate to what Carlos Cruz III is saying especially with the following item under the Grade 6 curriculum:

Learning competency 5.1 expects grade 6 pupils to use audio and video conferencing tools to share ideas and with others online. Carlos is right, I am shocked....