July 15, 2013
Baker and coworkers in their report to the National Research Council in 2008, "Adequacy Estimates and the Implications of Common Standards for the Cost of Instruction", cite an evidence-based study in Arkansas that quotes the increase in resources required by schools with students predominantly coming from poor families. In this study, schools that cater primarily to economically disadvantaged children cost 22.5 percent more than schools with no poor children. Arkansas reports the lowest estimate. Minnesota, for example, arrives at 167.9 percent. Looking at the various numbers coming from the states, it appears that the increase in costs is somewhat inversely proportional to the baseline cost estimate. Minnesota expects to spend more on poor children because the state is spending less on each student ($4900) to begin with while Arkansas' baseline number is already much higher ($6100). Nevertheless, even with dissimilar numbers, one trend is quite clear, schools with students coming from poor families require more resources. In addition, seeing that states have these numbers mean that there is indeed an awareness among K-12 policymakers in the US that economic stratification is a major impediment to attaining equity in public education. Thus, states do emphasize school integration as well as channeling additional funds to schools with higher incidence of poverty.

Inequity in education does not stop at the basic education level. The Century Foundation Task Force on Preventing Community Colleges from Becoming Separate and Unequal recently submitted a report, "Bridging the Higher Education Divide" highlighting the inequity problem in higher education. In one of the sections of this report, How Social Composition Influences Curriculum, Expectations, and School Culture, Bowen, Chingos, and McPherson, authors of the award-winning book, Crossing the Finish Line: Completing College at America's Public Universities, were quoted:


“Students learn from each other. Being surrounded by highly capable classmates improves the learning environment and promotes good educational outcomes of all kinds, including timely graduation.” With respect to expectations, Bowen and company suggest: “The high overall graduation rates at the most selective public universities unquestionably create a climate in which graduating, and graduating with one’s class, are compelling norms. Students feel pressure to keep pace with their classmates.”

How then does one see an education divide? The following figures from the Century Foundation Task Force help illustrate this divide. 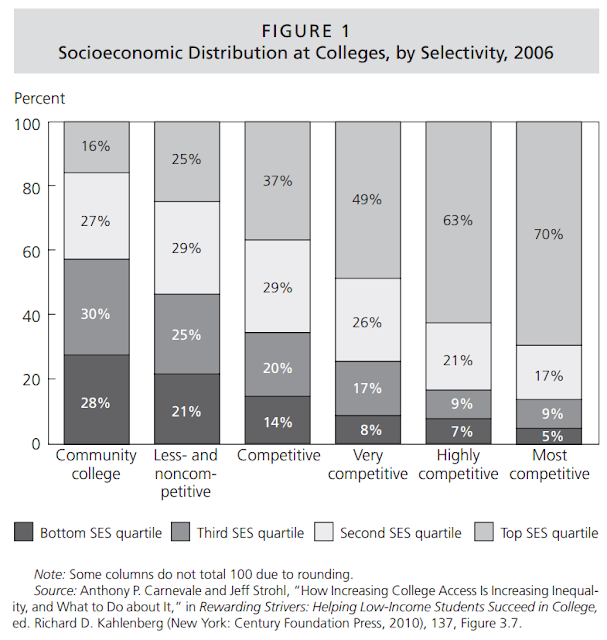 Seventy percent of students enrolled in the most competitive colleges in the US come from the top Socio-Economic Status (SES) quartile. On the other hand, more than half (58%) of students enrolled in community colleges comes from the bottom SES half. In looking at these numbers, one should also keep in mind the following statistics: In 2012, only 66% of high school graduates in the US are enrolled in colleges (College Enrollment and Work Activity of 2012 High School Graduates) and 46% of these undergraduates are in community colleges (Report of The National Commission on Community Colleges). Back in 2000, college attendance from lowest quartile is only 39% (Fair Access to College). These numbers taken together crystallize into the fact that community colleges in the US are predominantly serving students from poor families. This segregation alone as expected from peer influence affects the curriculum, expectations and culture inside these schools. The divide, unfortunately, does not end at this point. It is exacerbated by the following:

The Century Foundation Task Force also has the following slide:

Data and Statistics Education for All Higher Education