Judging the Quality of Information

July 19, 2013
Kristen Purcell, Judy Buchanan, and Linda Friedrich of the Pew Internet and the American Life Project recently provided the following report, "The Impact of Digital Tools on Student Writing and How Writing is Taught in Schools". This report summarizes results of a survey of 2,462 Advanced Placement (AP) and National Writing Project (NWP) teachers. Since these teachers are in charge of advanced classes in US high schools, it can be safely assumed that their responses to the survey are based on their interactions with high school students who have chosen to take a more challenging curriculum. These are the teachers of some of the most academically successful students in the US. Their responses are shaped by the cream of the crop, hence some of the findings may be of even greater concern and significance. An example is shown in one of the graphs presented in the report: 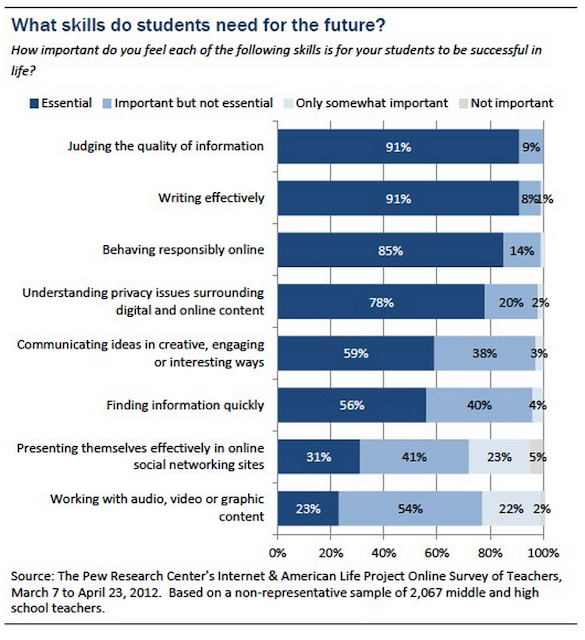 "Judging the quality of information" is tied with "Writing effectively" in the above list of skills teachers in advanced courses in high school think students should have or gain. The skills directly associated with technology are at the bottom: speed, presentation and technical know-how. How this applies in general is not that difficult to appreciate. One simply has to look at news feeds on Facebook. How many times have we seen posts like the one shown below?

And the verdict from snopes.com:

One of the arguments used by the people at snopes.com to arrive at the conclusion that the above posts or claims are bogus is the following: 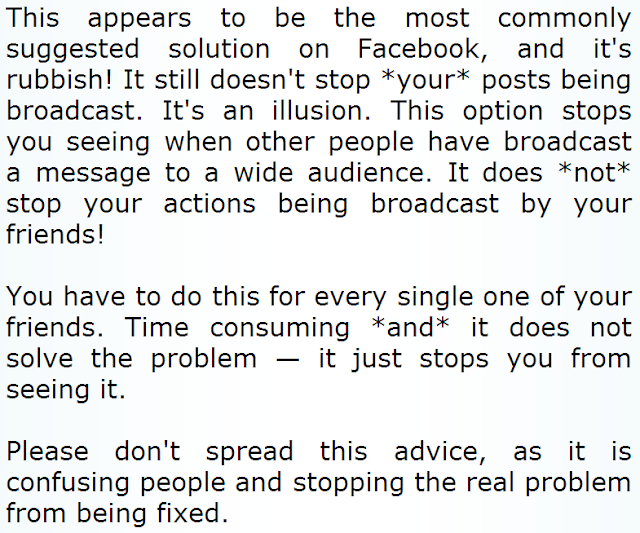 Thus, knowing how Facebook privacy policies work can easily debunk the claim. This shows that not knowing that the information posted is false sends people into wasting their time on the social network. And even with snopes.com stepping in and recommending that people stop posting the hoax, I still see these in my news feed. I guess it gives me some impression on some of the friends I have on Facebook.

Not being able to gauge the quality of information can have serious consequences. Medical or health myths abound on the internet. The above are, of course, void of bad intentions. My friends on Facebook who keep posting the above are in fact innocently trying to help, but there is also deliberate misinformation on the web. Here is an example from Principia Scientific International (PSI) which describes itself as a "self-sustaining community of impartial scientists from around the world deliberating, debating and publishing cutting-edge thinking on a range of issues without a preconceived idea of outcomes". 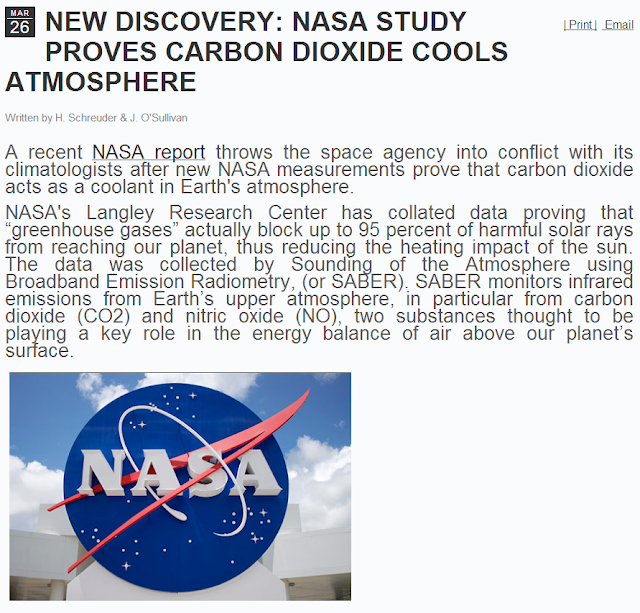 # Larry Anderson, Ph.D. 2013-07-04 00:08
Shame on PSI for posting this highly misleading article! The authors, Schreuder and O'Sullivan, have completely misinterpreted the linked NASA report, as commenters above have pointed out.

The following is copied from the NASA report:

An important piece of information above is "Powering every residence in New York City for two years." This helps us relate to the amount of energy that is involved in this process. Keeping this magnitude in mind, it is important to put it in perspective, which a footnote in the NASA news release generously provides:

Footnote: (1) No one on Earth’s surface would have felt this impulse of heat.  Mlynczak puts it into perspective: “Heat radiated by the solid body of the Earth is very large compared to the amount of heat being exchanged in the upper atmosphere. The daily average infrared radiation from the entire planet is 240 W/m2—enough to power NYC for 200,000 years.”

2 is tiny compared to 200,000, but one would not have seen this if all one had was the misinforming article from PSI. The greenhouse effect deniers are quick to embrace and proclaim that gases like carbon dioxide in the upper atmosphere of the earth (thermosphere) is more than capable to reflect back into space heat while hiding from the readers of their blog that carbon dioxide in the troposphere is equally capable of trapping the heat (which, by the way, is only 100,000 times more) coming from the planet and therefore makes the planet warmer. The question is, as the teachers correctly identify in the survey: Are we able to judge the quality of information?