July 20, 2013
There is information to be gained from data. Tests in schools can be informative. Scores of students provide a quick glimpse of the current state of education. Thus, it is useful to have these numbers. These numbers may not tell everything in detail with high accuracy. Nevertheless, test results allow for a useful perspective. The National Achievement Test administered by the Department of Education (DepEd) in the Philippines, a set of standardized tests addressing the major subjects taught in school, is an example. These tests are given to Grade 3 where students are assessed in both English and Filipino (These two subjects comprise two thirds of the exam) and Math and Science (These two account for the remaining one third). A different set of tests is given to Grade 6 pupils where each of the following 5 subjects is assigned 40 items: (Science, Math, English, Filipino and Social Studies). Another set is administered to fourth year high school students (This is currently the last year of basic education in the Philippines since K+12 has not been implemented yet for the additional two years in high school). The scores in these exams are reported as percentage of items correctly answered. A mean percentage score (MPS) of 75 percent is currently set as the goal of the DepEd. The following are data from a presentation made by the National Education Testing and Research Center, entitled "NAT Overview and 2012 Test Results". 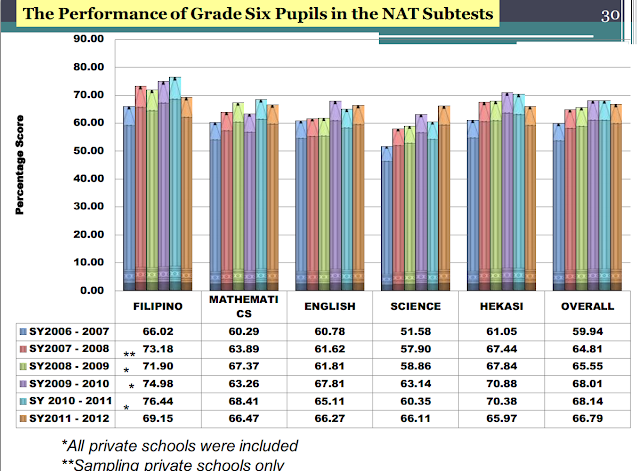 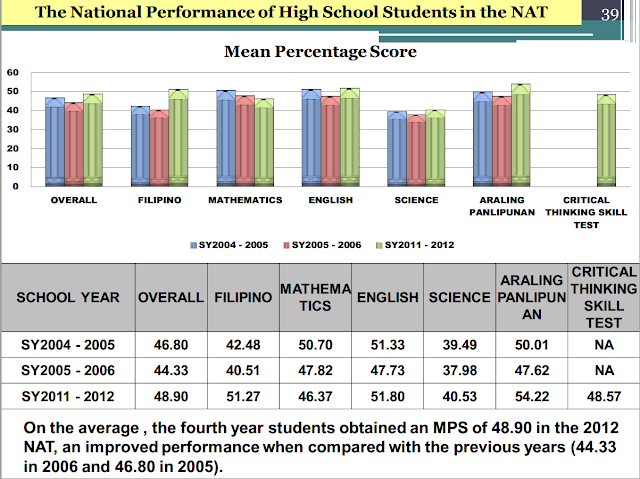 The numbers for the overall MPS for the school year 2011-2012 are as follows:


The goal of 75% seems elusive at this point. The presentation made by the National Education Testing and Research Center also provides some analysis and I would like to highlight the following. In my opinion, these may be significant:

In addition, the following factors have also been found to correlate positively with MPS:

The above is not surprising as these items have been pointed out in numerous posts in this blog. These are factors that influence the quality of education in schools. Even the fact that giving quizzes helps has been mentioned in this blog.
The effectiveness of direct instruction has also been highlighted in the article "Best Evidence Encyclopedia": Proven Programs in Basic Education. Even the superiority of textbooks over online material has been discussed in "Reading: On-Screen Versus In-Print".

Although a decade has passed and 75% is still not within reach, it needs to be pointed out that there are pockets of excellence in Philippine basic education. These are schools that seem to be doing great. An example comes from the schools in Bangui, Ilocos Norte:
75 percent is indeed within reach. It is not impossible.