July 07, 2013
Take for example the two English words "dessert" (something sweet one eats after a meal) and "desert" (an arid land), there is really nothing significantly different in the way these two words are normally written down except for the fact that one word has two s's. However, when correctly pronounced the two words are easily distinguishable. Here lies one difference between oral and written language. Variations in syllable length, loudness and pitch constitute the prosodics of a language. With the Tagalog language, one can cite "mahaba" (long) and mahabag (have mercy). Since the meaning of a word depends on how it is articulated, stressed or intoned, reading accuracy involves correct pronunciation. A recent study published in the Journal of Research in Reading, "The effects of musical training on the decoding skills of German-speaking primary school children" demonstrates that music training helps in reading accuracy:

The results of this study are summarized in the following figure: 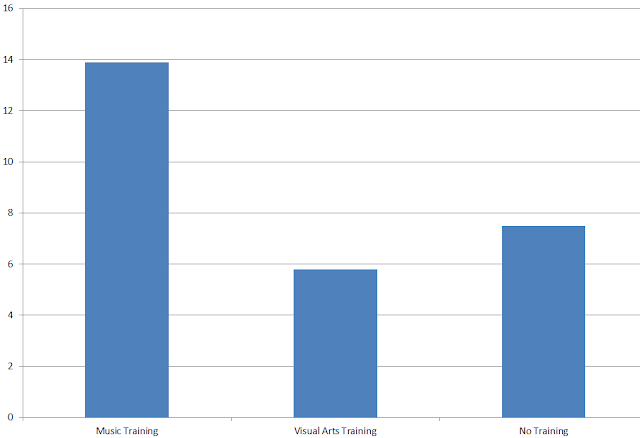 The differences between pre-test and post-test reading accuracy scores are significantly better for students that participated in music training. According to the paper, "Pre-tests (CFT, questionnaire, music and reading measurements) were conducted in February/March 2008, which corresponded to the second half of ﬁrst grade for the group in question. Reading skills and musical ability were tested again in January 2009 immediately after the training had been administered. It was ensured that the testing was no burden for the children and the regular classes."

Of course, besides helping children to read correctly, there are other reasons why music must remain as a subject in basic education.