March 09, 2013
I recently came across an article in the Washington Post, "Where school reform fails to meet classroom reality". What caught my attention is the following comment posted at the end of the article: 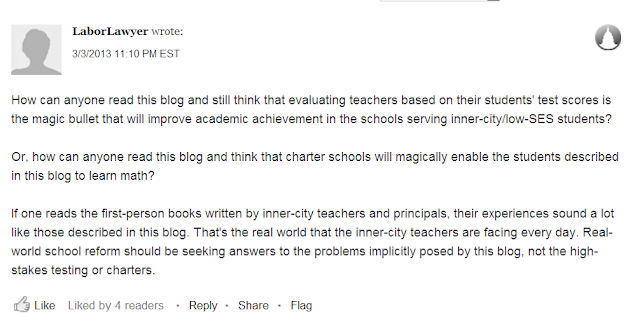 "How can anyone read this blog and still think that evaluating teachers based on their students' test scores is the magic bullet that will improve academic achievement in the schools serving inner-city/low-SES students?" LaborLawyer is commenting on an article written by Michelle Kerr, "Teaching Math: The Driftwood and the Vortex". One of the classes that Kerr teaches prepares students for the California’s High School Exit Exam (CAHSEE). The class prepares students for an exam so why are the exam scores of the students not a good measure to use to evaluate Kerr's teaching? Ironic, isn't it?

Kerr starts the article by describing a typical situation inside a classroom filled with students who have not passed CAHSEE. In Kerr's words:

Kerr's goals are specifically laid out:


"I aimed my preparation push for the November test, with the February test as a backup. Of the original eighteen students, I thought nine would pass by November, or get close to it. Their existing math knowledge wasn’t so much the problem as was their inexperience in high-stakes tests. The other half did not appear to have the language, motivation, and/or math skills to pass, but at least I could teach them some math they could use when they finally got around to wanting it badly enough.

But even that limited goal was a challenge. I learned how long I could run an upfront discussion before their attention waned, carefully timing the moment when I moved them onto practice problems—which had to be carefully managed, too. Struggling students need to build momentum on a string of problems before they get to their first hesitation point. Hit that hesitation point too early and they “shut down”. They look away and find a more rewarding activity: talk to their neighbor, take a nap, turn up the volume on their iPod, sketch, tiptoe out of the room when I’m not looking, send objects airborne in pursuit of a target. Finding worksheets that started with problems simple enough to get them working and then built to more challenging work that wasn’t too hard took up a big chunk of my day. I’d spend hours looking through practice sets to be sure they didn’t leap to tough problems too soon, and often just wrote a dozen or more identical problems on the board, simply varying the numbers."

But there were high points:


"I lived for the days when I scored a win. Much is made by both reformers and progressives about the soul-killing nature of drill, but I got hooked on the genuine triumph my students felt when they worked a whole set of problems correctly. They beamed and bragged. Stickers were not unappreciated, or maybe a big red star with a smiley face. They didn’t mind the drill. They minded that they couldn’t do the drill, and so pretended they didn’t want to."

And then Kerr delivers the punch:


"Five of the nine students on my “should pass” list did, in fact pass, Jack and Deon in October, the other three in November. Two of the remaining four got “high fail” scores; the other two did about five points lower than I would have liked. All four on the “should pass” who didn’t probably did well in their February test. Of the remaining nine with more challenging skill deficits, at least half will find the motivation, the focus, or the language skills in the next year to succeed. The others have the option to waive the requirement.
Reformers will judge me for the low pass rate. As a long-time test prep instructor, I judge myself for the four who didn’t pass in November, and will continue to look for better tools. But as a teacher, I judge myself by the degree to which my students develop increased confidence and competence in their math skills, as well as the degree to which they take more responsibility for their academic choices.
And on those criteria, I am content."