A Lesson on Entropy

March 26, 2013
I heard from a colleague of mine that when he was a graduate student at Berkeley, Professor Pimentel would call dead people on the phone when he needed some questions answered in front of his General Chemistry class. I thought that was a good idea. After all, with my name, I probably have an edge with some influential people up there. Of course, one should not try this on the first class of the semester. Students may just drop the course in fear that they have enrolled in a class taught by a instructor with loose screws.

Pretending that I have not prepared for the lecture, I would take my cellphone and dial an emergency number. It is my direct line to Saint Peter. So the lecture begins....

"Hello, is this Saint Peter?", I ask. "This is Angel de Dios, no, I am not one of your guys, I am just a teacher here at Georgetown." With the recent conclave, I had to explain to Saint Peter that I was not about to ask him for the secret behind black versus white smoke. I knew he was not about to share that secret with me. I was calling to seek help for an introductory lecture on entropy. I was hoping that I would get a chance to talk with the late Professor Ludwig Boltzmann. 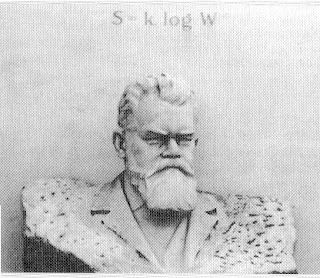 Saint Peter says, "Yes, Boltzmann is up here." He then offers Boltzmann's direct phone number in case we get disconnected, and I grab a piece of chalk to write the number:

I pause for a moment and ask Saint Peter, "Are you sure? This looks like Avogadro's number." Saint Peter answers, "Yes, they are roommates." He then proceeds into explaining why it is appropriate to relate the two. Saint Peter directs me to write on the board Arrhenius' equation:

Lost, I then ask Saint Peter why these equations. Saint Peter then explains that Boltzmann's number is the ideal gas constant divided by Avogadro's number:

Boltzmann is our bridge to the microscopic world, the connection between the world that we could touch, see and feel and the world of atoms and molecules. Impressed of how much physics and chemistry Saint Peter knew, I am simply amazed. Saint Peter says he has been taking Massive Open Online Courses. So I ask how that works up in heaven. Saint Peter replies that they really have nothing better to do since downloading of Angry Birds on their IPads has been prohibited. Anyway, Saint Peter then transfers my call to Professor Boltzmann. The following is the conversation I had (a colleague of mine from Germany helped me prepare this dialogue):

Professor Boltzmann, ich hatte gehofft, dass Sie uns Entropie als eines der wichtigsten
chemischen Themen naeherbringen koennten. Professor Boltzmann, I was hoping that you
would be able to guide us as entropy is one of the most important concepts in chemistry.

Meine Studenten sind sehr empfaenglich, insbesondere wenn ich sie ins Konzept mit
einbinden kann. Ich bin sicher, Professor Boltzmann, dass Sie der beste Ansprechpartner dafuer sind. My students are very perceptive especially if I am able to engage them in theconcept. I am sure that you would be the best person to help, Prof. Boltzmann.

Ich werde nun zu der Webseite gehen und meine Vorlesung beginnen. Vielen Dank
nochmal, Professor Boltzmann, Für konnten sie nicht Sie lieben. Aber noch, war Ihre
Liebe zutreffend. Und als keine Hoffnung nach innen gelassen wurde. Auf dem starry,
starry Nacht. Sie dauerten Ihr Leben, wie Geliebte häufig. Aber ich könnte Ihnen,,
Professor Boltzmann: Diese Welt wurde nie bedeutet Für ein so schön wie Sie.
I will then go to the website and start my lecture. Thank you again, Professor Boltzmann, For
they could not love you, but still your love was true, and when there was no hope left inside
on that starry starry night, you took life as lovers often do, but I could have told you, Professor
Boltzmann, this world was never meant for one as beautiful as you.

And the lecture is as follows:

Molecules tend to follow simple rules of probability.  To begin our discussion of entropy, let us go through a brief description of probability.  Here is the first example:  (I have two boxes and two balls)
Here are the possible scenarios:  "Let me count the ways."

Case 3: There is one ball in each box


Thus, we have three cases:


With three balls and two boxes, we have the following:

With four balls and two boxes, we have the following:


With twenty balls and two boxes, we have the following:


Suppose we have 7 atoms (or molecules) and we introduce quantum mechanics into the picture, that is, the energies of these atoms are quantized.  For simplicity, we will assume that the allowed energy levels are 0, e, 2e, 3e, 4e, 5e, 6e, 7e....  We can think of these energy levels as boxes.  The total energy of the system is, however, restricted.  It should always equal 7e.  Thus,


So, entropy is introduced. Case 10 in the above table is the most probable distribution. I try to avoid the word "disorder" in describing entropy. There is nothing "disordered" in the way molecules distribute energy among themselves. The box with the lowest energy will always be occupied. But there are no gaps, no molecule is allowed to monopolize and take all of the energy....

Of course, I wonder if students do appreciate entropy after this lecture or do the students simply remember Avogadro's number....