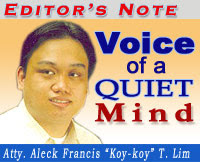 So far, many Filipinos are not happy with the new educational system recently introduced by the administration and implemented by DepEd. It’s like giving a wrong medicine to a misdiagnosed illness. If the purpose of the K+12 Program is to improve quality of our education, the government must first address the old problems before it tackles new ones. The 2-year extension of mandatory public education in our country has received a favorable support both from politicians and top honchos of the Department of Education. By looking at all the good intentions this revised program wants to achieve, it appears that the plan is on the winning side. However, there are serious problems DepEd and the government must first look into. The extension is of course costly. More classrooms, books, and teachers will be added to the system. And that’s where the more serious issues crop up. How can the government add more classrooms when in fact today we do not have enough classrooms for all students? How can the government add more books for the K-12 program when in fact many students are still deprived of books at schools? All can be aggravated by the fact that we are losing brilliant teachers to Western and Asian countries who continuously hire Filipino teachers to teach core subjects abroad such as English, Math and Science. Isn’t it wise and logical, and simply an exercise of common sense, that before we become very serious with the K-12 (additional two-year program) educational change we should first address and fix the tangible deficiencies of our education? DepEd cannot just plunge into the future of uncertainties without first looking at the current problems that besiege Philippine education. We have not mentioned of the declining quality of Philippine education. While our Asian neighbors have made gigantic leaps in harnessing their educational system, ours is still stuck with mediocrity and traditionalism. And we cannot just ignore the fact that even our English proficiency, which for decades had made us remarkable in the world, is fast deteriorating. By introducing a revised educational system without first repairing its loopholes, the government has become guilty of reckless dreaming. We have to see first the current reality before we entertain good dreams otherwise the K-12 program might just turn out as another nightmare for everyone. And we should not forget to mention the noodles scandal at DepEd in which almost half a billion pesos was wasted on the so-called noodle feeding program for malnourished pupils. That scandal had given us a perspective that the K-12 program might as well be a subtle ploy for DepEd officials to set up a new source of personal income for those who have personal interests in government funding. What bothers us most is the seeming blindness of the DepEd. It has to see first the ancient problems that scuttle the entire educational system in the country before it moves to a bolder step. Failure to do so would just result to multiplication of the existing problems of Philippine education.
Commentaries Views from Regions