August 06, 2012
In the Trends in International Mathematics and Science Study (TIMSS) 2007, Singapore students had the top score in both Grade 4 and Grade 8 Science exams. In Math, Singapore was second in Grade 4 and third in Grade 8. Not surprising, publishers have looked at ways of adopting Singapore's math and science curriculum to other countries like the United States. "Math in Focus" is one example. Copying a curriculum can be done at several levels of detail. On the surface, the standards of DepEd's K to 12 for mathematics is not different from that of Singapore. Below are snapshots. These are parts of the content standards for Grade 1 math. 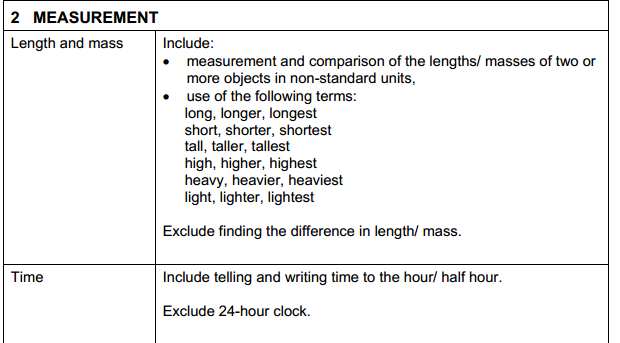 There is no substantial difference between the two and it is in fact amazing that both contain the same set of words; short, long, tall, high, heavy and light. It is interesting that neither has "low', "lower" and "lowest", while there are three words that imply a large magnitude; long, tall and high. If the above two are essentially the same, does it mean that math education in DepEd's K to 12 is identical to Singapore math? Of course, the answer is "Not necessarily".

The delivery of a curriculum involves textbooks, learning materials, teachers, and medium of instruction. The actual lesson plans and learning activities, the scope and sequence of topics - these are all laid out in the textbook chosen for any class. For this reason, "Math in Focus" of Houghton Mifflin Harcourt follows Marshall Cavendish's My Pals Are Here math series, the widely used math textbook in Singapore's primary schools. Thus, one can copy not only the curriculum, but also adopt the same textbook. At this point, however, education has not been delivered yet. We still have to deal with teachers and if the medium of instruction is not English then we may have to translate.

One of the important findings of the above study is the following:


“….The math result is especially striking by how low it is. Because of the structure of the test, a theoretically minimum possible (or likely) score is 16.67 if one knows nothing at all and simply makes random guesses as to the answer to each question. The actual group mean scores were 16.3 for the English group and 17.3 for the KEPP group….”

One main problem with these studies is the presence of multiple factors affecting education. Teacher quality is a very important factor. There are two countries that do well in education: Finland, which uses mother tongue and Singapore, which uses English as medium of instruction. Both countries do well because of highly qualified teachers. These two countries demonstrate what the most important factor is. What medium of instruction is used appears to be inconsequential if the teachers are highly qualified. The study of Walter and Chuo actually shows the other side of the puzzle. While Singapore and Finland illustrate that good results can be reached with either medium of instruction. The Kom project above demonstrates that poor results can happen with either. When the scores do not even go beyond random guesses, there is clearly no learning, not with English, not with the mother tongue.
DepEd's K to 12 has introduced a mother tongue based - multilingual approach to primary education, similar to the experiment in Cameroon. The mother tongue is now the medium of instruction for the early grades. Mars, a blogger and a kindergarten teacher recently wrote in her blog Miss Wise:


"...From now on, we are implementing the NO ENGLISH POLICY in kindergarten. This mode of teaching under the Mother Tongue-Based-Multilingual Education (MTB-MLE) program of the Department of Education is quite tricky for people like me who’s used to conversing in both English and Tagalog....

...So far, our implementation of the program is doing well and I love the fact that our kids know the names of the colors and shapes in Filipino. I feel so proud of being a Filipino whenever I hear my pupils name the colors and shapes in the Filipino language, I kid you not. Teaching Mathematics/numbers is much harder though especially now that we are teaching addition and subtraction. I have no idea on how to teach the kids about the terms plus, minus and equals in lingua franca but tomorrow, I will do my best."

And she had the following cartoon, originally from Leyte Samar Daily Express' "MTB-MLE in a Mess":

To understand why the medium of instruction is less consequential than other factors, one needs to look deeper into the two disciplines. Both Mathematics and Science operate on different levels of communication. James Paul Gee wrote the following essay: "What is Academic Language" to highlight the role of language in science education:
To illustrate the distinct character of science reading materials, Gee uses the following examples which were written by the same person (Greg Myers in Writing Biology: Texts in the Social Construction of Scientific Knowledge (Science and Literature Series)):

(1) Experiments show that Heliconius butterflies are less likely to oviposit on host plants that possess eggs or egglike structures. These egg mimics are an unambiguous example of a plant trait evolved in response to a host-restricted group of insect herbivores.

(2) Heliconius butterflies lay their eggs on Passiflora vines. In defense the vines seem to have evolved fake eggs that make it look to the butterflies as if eggs have already been laid on them.


(1) shows the use of language in a peer-reviewed science journal. The sentence construction underlines the scientific method. The claims and arguments are expressed clearly. (2), on the other hand, is supposedly written for a popular science magazine. It sounds more like story-telling. (1) typifies an academic style of language while (2) is more akin to a conversational style. Mathematics likewise goes far beyond conversational language. And as advertised in "Math in Focus", a concrete-pictorial-abstract approach is used. Working with illustrations and visual aids allows for lessons to be less on text, thereby focusing more on the cognitive skills that need to be developed.

In both math and science, the lessons really deviate from how we normally talk with each other in everyday life. Young children do come to schools with their own styles. Young children have been talking with their friends, their parents, and their siblings long before they begin kindergarten. The Mother Tongue carries their current identity. A school that ignores the Mother Tongue will only alienate the children. For this reason, schools must have a subject on mother tongue. However, it is important to note that both math and science require an academic language. Herein lies the importance of mastery of the subject on the teacher's part. And it requires that the language to be used is one that the teacher can comfortably use. At this point, how a person thinks comes into play. A child can develop these skills as early as preschool. Logic, symbols, representations, and purpose come from an active and engaged mind. It goes far beyond grammar for it involves a line of thinking....
Commentaries Curriculum Science Education Teaching