The Dismal State of Philippine Basic Education Is Aquino's Legacy

June 06, 2019
When the new DepEd K to 12 curriculum was introduced, it was clear that the government would not be able to deliver what it promised. Shortages were already widespread as the number of school-aged children had expanded considerably. Both addition of kindergarten and two years of senior high school were expected to exacerbate the problems in Philippine schools since the government was still catching up to the needs of the old 10-year curriculum. Yet, despite these extravagant revision, the new curriculum was ill-planned and foolishly implemented. This could no longer be denied as illustrated in the poor performance of students across the board on the national achievement tests. This is Aquino's legacy. The Duterte administration with its education secretary Leonor Briones are now tasked to save a sinking ship.

To illustrate what the government must do to rescue its failing education system, we should look with a healthy dose of realism at the following post on secretary Briones' Facebook page: 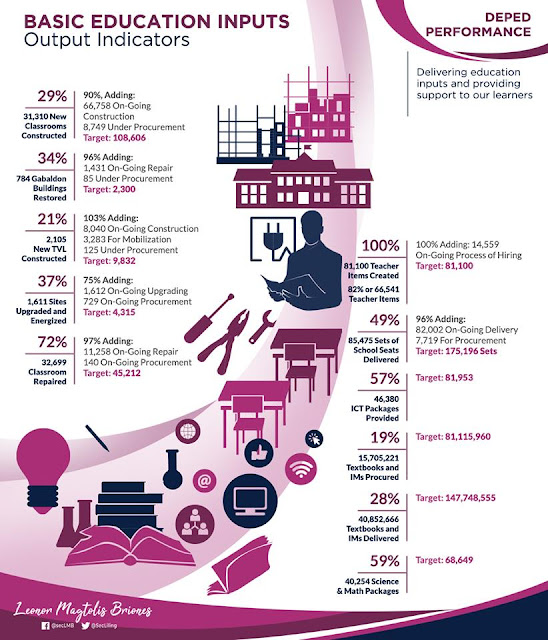 This is a gargantuan task left by the previous reckless and irresponsible Aquino administration. And it is truly hypocritical for supporters of Aquino to join the current propaganda of maligning the current administration, as exemplified in this duplicitous post from PinoyAkoBlog: 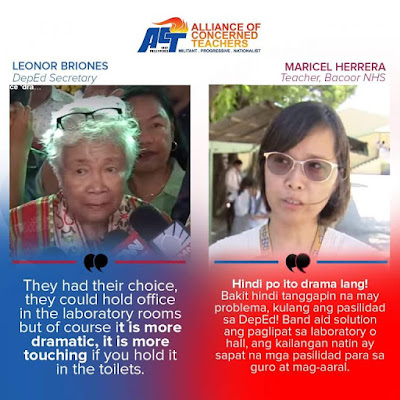 The school in question has abandoned multi-shifts, a move that is certainly in the right direction, but in so doing, finds a shortage in rooms for faculty to use. The action taken by a small percentage of its teachers, converting restrooms into faculty rooms, is clearly an exaggerated move as there are other less dramatic options. If teachers do value the learning of students, the school being able to go into a single shift should be celebrated and not utilized as a propaganda tool.


Teachers should not allow themselves to be used for political purposes. As I have stated in my previous post on this blog, "Seeing that some teachers would rather choose an undesirable solution just to make a statement can easily cast doubt on what we in the academic community truly value."