A Propaganda Can Backfire

June 05, 2019
Angela Phillips can find support for her assertion in the recently concluded senate elections in the Philippines. She writes in a chapter in the book Political Communication in Britain, "... a campaign that relies mainly on attacking the opposition, without also providing positive reasons to vote, often backfires...." There is a fine line separating propaganda from evidence-based research. Propaganda often has a negative connotation. In the Philippines, the problems plaguing basic education require our attention. As members of the academic community, we must insist on pursuing the truth. Education, however, falls within the social sciences. Raising our children is shaped by our values. Addressing these problems, without doubt, likewise falls inside a political arena. We must be thoughtful then and work hard to ensure that we are not already starting with an answer to the problem and are simply relying on picking evidence that supports our predetermined conclusion.

Recently, a teacher who also belongs to the Alliance of Concerned Teachers in the Philippines, Maricel Herrera, brought to our attention on social media, the fact that in one high school, teachers have decided to convert a restroom into a faculty office.

The response from the secretary of education, Leonor Briones, is anticlimactic: "They could hold office in the laboratory rooms but of course it is more dramatic, it is more touching if you hold it in the toilets." (Inquirer) 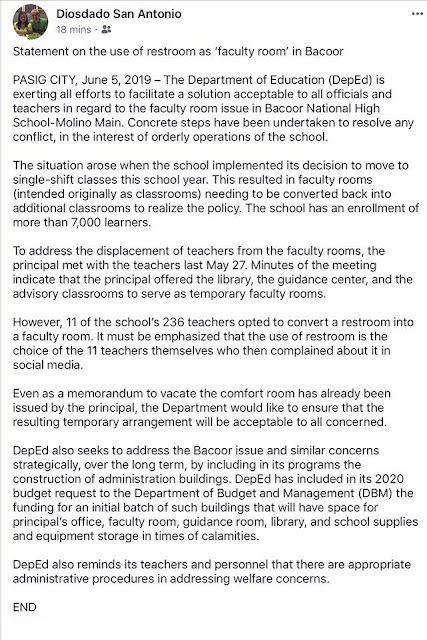 As educators, we need to pursue truth. We need to present situations as they are regardless of our own point of view. Adding drama maybe politically advantageous but we must be wary of the consequences of a negative propaganda. Basic education in the Philippines is in a dire situation. And we must not discount the fact that there are a significant number of people who are already blaming the failure of education on the incompetence of public school teachers. The lack of office for faculty can be addressed without resorting to restrooms. Teachers in public schools in the United States often do not have their own offices. They usually have their desk inside their classrooms. Seeing that some teachers would rather choose an undesirable solution just to make a statement can easily cast doubt on what we in the academic community truly value.