How Do Children Learn Math

June 10, 2019
Similar to constructing a house that starts with a foundation, the mathematical skills and knowledge of a sixth grader are influenced by what this sixth grader knew or learned during preschool and the early elementary years. Grade six pupils in the Philippines average less than 35% in the 2017 National Achievement Test. With this poor performance, it is useful to examine the relationship, if there is one, between early math knowledge in kindergarten and first grade, and later math achievement at the end of elementary school. Such a relationship, called a "math trajectory", can be useful in pinpointing which items in early math are highly predictive of math performance in sixth grade. Bethany Rittle-Johnson and coworkers have recently mapped a "math trajectory" for low-income children by following the progress in math of over 500 children in Tennessee from ages 4 to 11. Since these children come from a disadvantaged background, their path in math is likely to be similar or relevant to the path taken by students in public schools in the Philippines.

What is surprising is that the "math trajectory" found in this study is no different from the path taken by students from privileged families. The key elements that connect preschool math to the end of elementary math education are the same. Students who do well at the end of fifth grade are those who were proficient in the following two areas in preschool:

The above is certainly much smaller than the following list:

After first grade, being able to map numerals with quantities as well as arithmetic operations become additional key elements. With this trajectory in mind, one can take a closer look at the mathematics curriculum in DepEd's K to 12.  Here is the math curriculum for kindergarten: 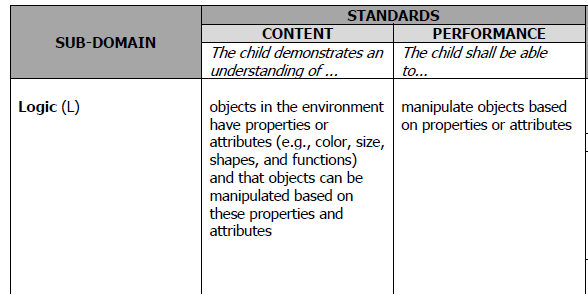 Since math is taught in a spiral fashion in the Philippines, the following years include the same sub-domains but supposedly at a deeper level. This illustrates a problem the spiral approach has: lack of consideration of learning trajectories. Clearly, it is not necessary to cover all sub-domains of mathematics every year. In fact, students may benefit if both kindergarten and first year are focused on the early skills that correlate with performance in later years.