What the "Yellowtards" Do Not See, but the Masses Do

May 11, 2017
Supporters of the previous administration have earned the nickname "Yellowtards" because of their leaders' penchant for this color. Based on a survey by the Social Weather Stations, the current president of the Philippines, Rodrigo Duterte, is still enjoying a seventy five percent satisfaction rating, in spite of the international media being dead set on discrediting Duterte. On the other hand, the vice president and voice of the "Yellowtards", Leni Robredo, receives only fifty three percent. There seems to be a huge disconnect between the two groups.

There has always been a huge gap between policy makers and the masses in the Philippines. The current basic education curriculum, for instance, is basically unknown to the masses. And to some of the common people who are knowledgeable about the curriculum, DepEd's K to 12 is not a good idea. The masses may have a different way of seeing things. After all, their children are the ones who are studying in these public schools. With regard to drug abuse and violence, their communities are the ones experiencing the evils of methamphetamine. To these people, the evidence is clear, the use of shabu leads to increased criminal behavior.

Why there is a huge gap between the "Yellowtards" and the masses, I believe, is captured in this post by Sass Rogando Sasot on Facebook: 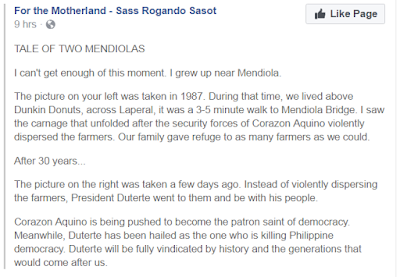 Duterte is seen differently by the masses. "Instead of violently dispersing the farmers, President Duterte went to them and be with his people." That sentence captures what the masses see differently in Duterte. Unlike the previous administration, the masses see Duterte as one of them. An article published by the Inquirer months before Duterte being elected as president demonstrates this.

Duterte was described as a leader with a simple lifestyle:


As mayor, Duterte said he earns more than enough to support a simple lifestyle. “Salary plus allowances as mayor should be enough,” he added.
If he ever becomes the country’s president, he would never be jailed for pocketing government money, the mayor said.
“Perhaps [for] genocide and murder,” he added, generating laughter from the crowd.

"Yellowtards" can not see this, but the masses do and they see Duterte as one of them. After all, there was a time that Duterte also thought that DepEd's K to 12 was wrong:

The masses often feel powerless. Seeing someone they can easily relate to at the top can make a big difference.