Farewell and Best Wishes to a Great School Principal

May 19, 2017
"Great leaders don't set out to be a leader, they set out to make a difference. It's never about the role, it's always about the goal." -Lisa Haisha.

I received a message today from the principal of Mason Crest Elementary School, Brian Butler. He would be leaving Mason Crest to join the Office of School Support, helping other principals and school administrators in his new role. Mr. Butler in his message did assure parents that Mason Crest would not "miss a beat" in his absence. He did make a difference in the school. His leadership was not so much about being a boss, but on how the school strove to serve each and every student under his guidance. Advocating and working hard to create a professional learning community was his focus. His eforts were towards ensuring that Mason Crest was a school that truly took student learning seriously. His leadership was indeed transformative. Nonetheless, my daughter was not happy to hear of his departure. Neither was I. Of course, I told my daughter that Mason Crest would still continue to have the same team of staff and teachers. Mason Crest would continue to be the same school where every student, every teacher, and every staff would be valued. Mr. Butler worked hard to create a community of learners and that was not going to vanish in an instant.

Mr. Butler's commitment to "education for all" would continue at Mason Crest for he had helped create a team of lifelong learners. This team would carry the same vision. Without doubt, such direction would continue, "All means all". Thank you and Godspeed, Mr. Butler. 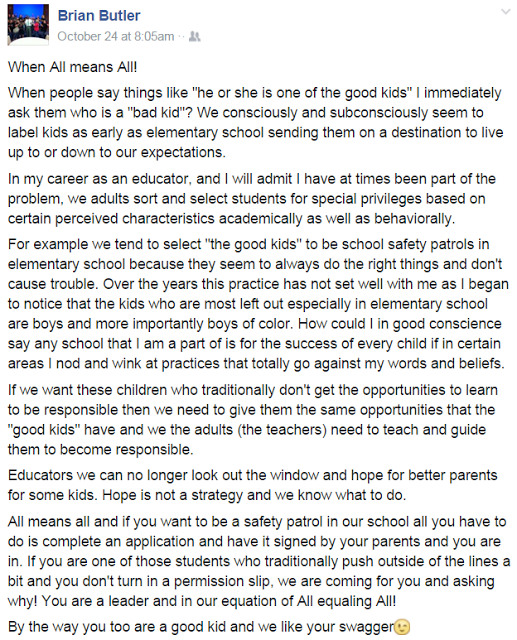