May 30, 2017
The title of this post is a modified version of an article published in The Economist in 2012. 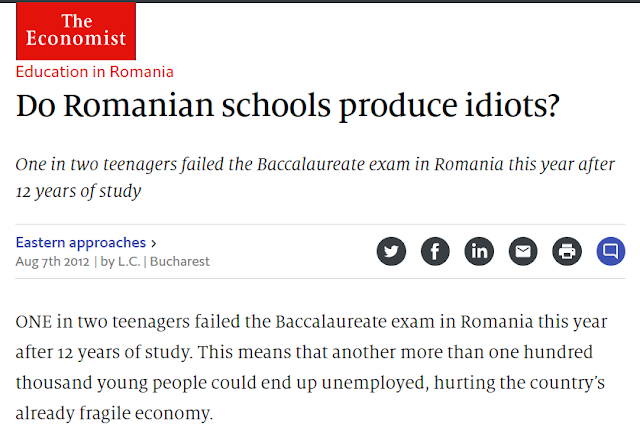 After all, based on the average score on the high school National Achievement Test in the Philippines, a majority of students are failing, very similar to the predicament faced by teenagers in Romania. There are in fact additional similarities. Romania also witnesses its bright young citizens receiving education abroad and immigrating for good. Romania likewise does very well in academic competitions. Similar to the Philippines, there is not one university in Romania that is ranked among the top 500 in the world. There are a lot of things that are the same between the two countries that one can easily write an essay on Philippine education by simply replacing "Romania" with "Philippines" in The Economist article.

One glaring similarity between the Philippines and Romania are the reasons why basic education is a huge disappointment. According to The Economist:


One of the reasons for their failure is that education in Romania has never been properly financed. Its budget has been dropping to just 3.6% of GDP this year, while the average European rate is 5% of GDP.

Corruption also invaded the education system, as bribes became promotion tools for many students. Poverty is another scourge: the number of children who dropped out school tripled between 2000 and 2007 according to UNICEF. The financial crisis in 2008 made this worse. Budget cuts shut down schools in rural areas, making it hard for children living in isolated villages to reach school. Earning less than €400 monthly, many highly ranked teachers left the system and were often replaced by under-qualified beginners.

Amidst all of this resemblance, there may be something that is unique with the Philippines. It is "Brigada Eskwela". In 2008, Rhona B. Caoli-Rodriguez wrote in Prospects:


Brigada Eskwela (School Brigade) has also become a successful nationwide mobilization activity involving voluntary efforts from teachers, parents, students, and other community and civic organization members who give contributions in kind (e.g., labour, cement, timber and cleaning equipment) to repair classrooms and furniture and improve the overall school environment one week prior to the opening of the school year. LGUs, individuals, local businesses and other corporations have also given donations in kind.

It is 2017 and Brigada Eskwela is still alive and well.

The involvement of parents and civic organizations in our children schools is, of course, worth seeking. Parental involvement somewhat correlates with better learning outcomes in school. Gillian Burdett at Care.com listed 16 ways through which parents can get involved in their children's education but it is hard to see whether what parents do during Brigada Eskwela fits in any one of these 16 ways. Bea Kalayaan recently posted on Facebook her thoughts on this: 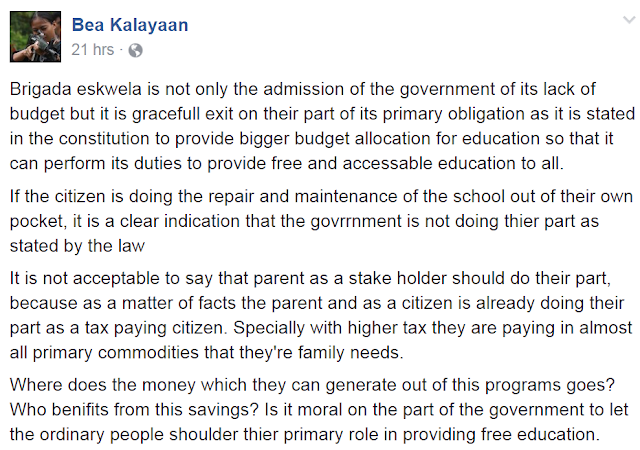 I agree with Bea's view.

Romania's education system is failing because its government is not doing its part for the education of its young. Romania spends the least for each student in the European Union:

In the Philippines, with 540 billion pesos assigned to the Department of Education, this means the government is spending about 25 thousand pesos per student. Converting this number into US Dollars with purchasing power consideration leads to 1000 USD per student per year. This will be more or less the same as how much the Romanian government spends. Thus, when it comes to basic education, Romania and the Philippines really have a lot in common.