When Primary Education Is Ineffective

June 22, 2016
"Although the objectives of primary education include developing the cognitive competencies of the student, few schools in developing countries achieve this goal, largely because of the previously identified poor schooling conditions. As a result, there are three undesirable consequences: to few children complete primary school in developing countries; students who do complete are often poorly educated; and consequently, the adult labor force is uneducated." This is what Marlaine Lockheed wrote in one of the chapters of the book "Effective Schools in Developing Countries". Poor schooling conditions consist of: a curriculum that is inappropriate in scope and sequence; inadequate teaching and learning materials; inadequate learning time; and ineffective teaching practices. DepEd's K to 12 may be getting a lot of attention at the moment, but in the last four years, Grades 1 through 4 in primary education have already changed. And sadly, these grades have changed for the worse as the above four poor schooling conditions have only been magnified.

The problem is that the focus has remained on enrollment. Of course, it is important that children are in school. However, enrollment can be a meaningless number, Quantity often does not mean quality. In fact, as enrollment number increases, limited resources can be stretched even further leading to a significant deterioration in quality.

Primary education is important. Quality in primary education is also necessary. It is not mere attendance that leads to later success in life. The key is the cognitive development that should happen in primary schools. This fact is clearly demonstrated in a recent study published in the American Educational Research Journal. With a 20-year longitudinal data set, clear correlations between performance in the elementary grades and later educational attainment are seen. The following table from the paper summarizes the results:

Since the numbers above are shown as highest grade completed by Age 21/22, a coefficient of 0.21 under math and age 9/10 means that a student whose math performance is a standard deviation lower is likely to have completed about 2 1/2 months (0.21 year) less than the average. Those who do poorly in either math or reading are therefore less likely to finish high school. The numbers above suggest that to address school dropouts, one must pay attention to the elementary years. In mathematics, grades 4 through 6 are very crucial. In reading, grades 2 and 3 are consequential. And in terms of behavior, it's the child's behavior in the last years of elementary education that strongly correlates with future success.

With this, it is timely to review an old article posted almost two years ago on this blog.


Should DepEd's K to 12 Be Suspended?

When it is clear that a direction taken will either lead to nowhere or disaster, it is important to step on the brakes. DepEd's K to 12 must not only be suspended - it must be scrapped. There is in fact a new community page on Facebook that carries such message:

There are various reasons why the program must be discarded at this point. Any one of these reasons is adequate enough to call for a suspension of the new curriculum.

The Early Years of Learning

It is no secret that problems in basic education in the Philippines are evident already in the primary years. Adding two years at the end of basic education does not address the problems in the early years. Cornelio Reformina of the Emilia Foundation describes this vividly using the following analogy:


"The k-12 program is like adding 2 floors to a rickety 10-story building on a weak foundation."

Classroom shortages are widely known. Poor facilities and overcrowded classrooms are widespread. Teachers are also overworked and underpaid. Learning materials are not available. The government simply does not have the resources to implement K to 12. The following photo taken and posted on Facebook by Genaro Ruiz Gojo Cruz speaks volume with regard to the current predicament of schools in the Philippines. One must keep in mind that this is not a photo from a school in one of the regions devastated recently by typhoons. This is a photo of a classroom in Cocob Elementary School located in Zamboanga del Norte. These needs must be met first. Otherwise, any curriculum is bound to fail. 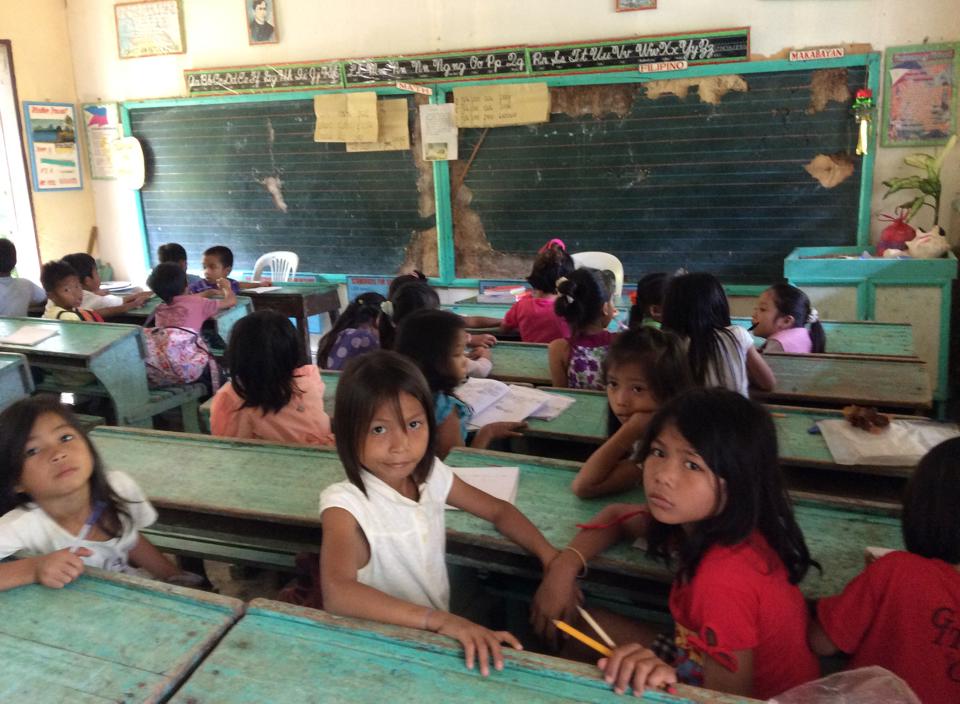 K to 12 Is Simply Inconsistent

One of the justifications given for K to 12 is decongesting the old curriculum. Proponents claim that too many topics are forced within a very short 10 year period. If this is true, K to 12 does nothing to solve this problem. The subjects covered in the new grades 7 through 10 are no different from the old 4-year high school. Take, for instance, the math and science subjects. The only difference is that a spiral curriculum is implemented but the coverage remains the same, the four years of junior high school are taking biology, chemistry, physics and earth sciences. In fact, algebra is taught in grade 7, which is no different from the old curriculum. On the other hand, the opposite has happened in the early years. Kindergarten up till second grade now focus on oral fluency while reading and writing are postponed. One can only imagine what a student needs to do during grades 4 through 6 in order to prepare for high school. The added two years at the end of high school come with its own content. These years are not from the old 10-year curriculum so these do not really decongest. The added two years come with a menu that says, "choose what you like, but only if it is available in your local school". Herbert Vego writes in Panay News:


"Look at some of the new modules K-12 has enforced. To name a few: Handicraft Production, Bread and Pastry Production, Caregiving and Electrical Installation and Maintenance.

The most important point, however, is that DepEd's K to 12 is simply the wrong direction. While other countries are looking into ways to improve the early years and provide a stronger foundation for learning, DepEd's K to 12 looks in the other way. The problems in basic education including dropouts are already happening in the primary years. Any program that is added much later to basic education simply does not address these problems.

Time is running out. DepEd K to 12 needs to be scrapped before it causes further damage to Philippine basic education and a generation of children.