Only the Court Can Stop K to 12

June 03, 2016
There is currently a law that authorizes DepEd's K to 12. Thus, the incoming executive is really not in a position to trash the new curriculum. Perhaps, it can be postponed due to lack of preparation and resources, but to repeal the law requires the Congress. Neither a postponement or repeal is likely to happen before school starts in the Philippines. So Troy Colmenares, one of the petitioners against DepEd's K to 12, has this to say on Facebook: 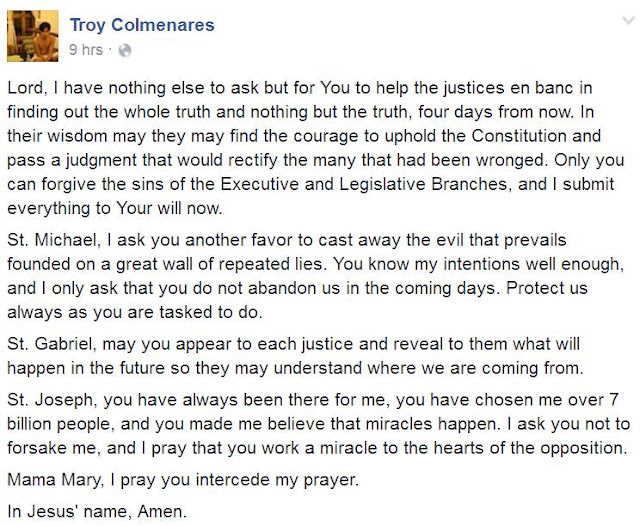 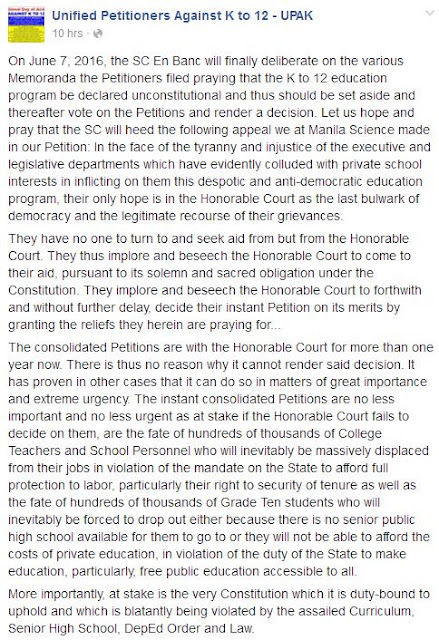 At this point, it is perhaps important to remind justices in the Supreme Court of the Philippines of how it really looks on the ground. Here is a repost from three years ago.

A school in the Philippines sets up three shifts in a day. An alternative means in which students only attend school two to three times per week is employed in some schools.

There are not enough chairs. Some students have to sit on the floor.

There are no learning materials but these are promised to arrive sometime this month, or perhaps, this school year. It seems to be the same story every year. The Alliance of Concerned Teachers writes on its Facebook page:


"Again they will encounter the perennial problems of our education system that is unresolved up to now by the Aquino government. President Aquino boasts that he is a “pro-education” advocate but it doesn’t show. Still there are shortages of classrooms: 32,644, teachers: 46,567, chairs: 2,500,000, textbooks: 60 million and water & sanitation facilities: 80,937. These are the basic needs of our education system."

Some are probably sick and tired of seeing and hearing the same stories. In fact, some even make the excuse that one should just be patient with the Philippines' Department of Education. After all, it is only the second year of implementation of K to 12, it is only the third year for universal kindergarten. Some say that these are simply "birth pains". That is not a correct analogy though. The shortages have been existing in Philippine basic education for over a decade now long before K to 12.

The simple reason why these shortages still exist is due to lack of prioritization on the part of the government. It is due to lack of planning and doing things basically on time. The only reason why learning materials are not available at the beginning of the school year is the lack of discipline and seriousness on the part of those who are supposed to deliver these necessary inputs. Overhauling the curriculum takes a lot and ignoring these requirements and then making the excuse that it is simply a gargantuan task demonstrates a combination of incompetence and arrogance among education policy makers.

One can not implement a new curriculum without addressing shortages in basic inputs to education. Classrooms need basic materials such as a blackboard, for example.

Yet, education policy makers choose to talk about the number of years in basic education, a spiral progression curriculum, learner-based approaches, instead of the basic input shortages.

Can photos and videos make the difference? Would seeing these conditions help citizens of the Philippines to realize what basic education in the country really needs? We could only hope.

Here is a video from Representative Tinio.


Published on Jun 3, 2013
With only 2.5 percent of the country's GDP allocated for education, the ACT Teachers party list led by Rep. Antonio Tinio inspected the Batasan Hills National High School and the Payatas B Elementary School on the opening day of classes belying official government claims of sufficiency in classrooms and other public school needs. They later picketed the Department of Education office to protest the K-12 Program of the Aquino administration in basic education and assert quality free education for all.

The Daily Mail of UK also published online a series of photos, "Who needs a school bus? Filipino pupils ford streams, ride motorbikes and even build a RAFT to get to class", describing the first day of school in the Philippines. Here are two samples: 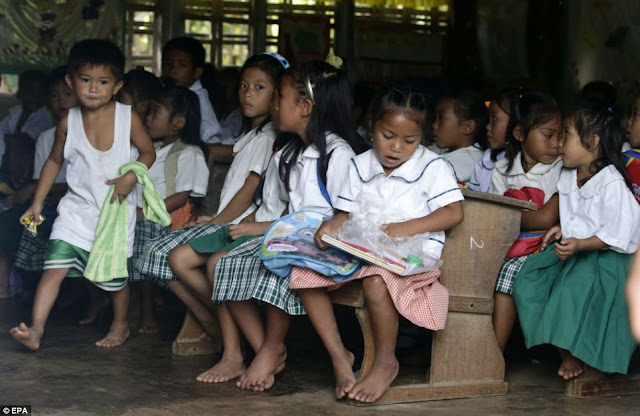