A Majority Is Against DepEd's K to 12

June 04, 2016
This is an updated repost of an article on this blog. It is in response to queries I have recently received regarding how Philippine media had been misinforming the public regarding DepEd's K to 12. Information shapes public policy but too often, there is lack of information or even misinformation. Furthermore, familiarity with an issue requires a great deal of time and effort from an individual. Policy promoters often resort to sound bites for these provide "top of mind" associations, which can then readily influence an individual's perception. More importantly, in a country where the number of families living in poverty is huge, there are much more pressing concerns such as inadequate water supply, frequent flooding in the neighborhood, rising prices of basic commodities, and decline or loss of income. Having grown up in a poor household in Manila makes me relate easily to these worries as well as the sense of powerlessness one develops with such daily anxieties. Gathering informed opinions on an education reform is therefore not an easy task.

Even in the United States, public opinion on the Common Core which is much smaller in scope than DepEd's K to 12, has been evolving for the past four years. Jochim and Lavery in an article published in the journal Publius have noted that "A range of issues that were largely ignored when the initiative was adopted, including concerns over cost, teacher evaluation, accountability, and student privacy were brought to the fore as the policy had to be reconciled with existing systems and institutions." Opposition to the Common Core has expanded considerably throughout the past few years while the reform is being implemented, as demonstrated by the growth in the number of bills introduced in state legislatures negatively impacting the education reform.

Between 2013 and 2014, the number of positive bills has not changed considerably while the number of negative bills has more than doubled. Thus, it does sound ludicrous for a columnist of the Philippine Star, Marichu Villanueva, to criticize the various petitions filed before the Supreme Court against K to 12 as delayed responses especially when newspapers in the Philippines have not been faithful in keeping the public well informed on this issue.

In an article posted on this blog on June, 2012 (before K to 12 became law), Flor Lacanilao made the following observation, "...nonscientist authors and cited authorities include prominent people in education, and that these nonscientist authors and cited authorities enjoy wide media coverage...." Lacanilao noticed then that a large number of articles published in newspapers are not from academic scientists. Lacanilao defined academic scientists as those who have made a major contribution or contributions to one’s field as shown by publications in peer-reviewed international journals; that is, in journals covered in Science Citation Index (SCI) or Social Sciences Citation Index (SSCI). Consejo Superior de Investigaciones Científicas, a research organization in Spain, has recently posted a ranking of academic scientists in the Philippines. The top ten are as follows:

The ranking is based on the h index - (a scholar with an index of h has published h papers each of which has been cited in other papers at least h times). I, for instance, currently have an h index of 38: 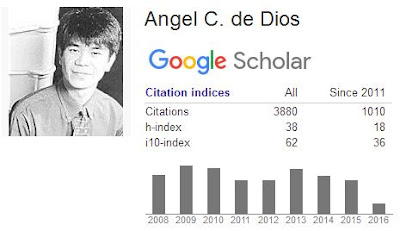 One needs to go near the bottom of the list to find the name of a person who probably has the most opinion articles on K to 12 published in Philippine newspapers:

Thus, combining the wide media coverage provided to non-experts who support K to 12 and the fact that most stakeholders are buried under much more imminent concerns, it is understandable why opposition to K to 12 is still in a state of flux. In addition, K to 12 is being implemented in phases. With each year, since 2012, only one grade in both elementary and high school is changed. Thus, the number of students being directly affected by the new curriculum is limited. In addition, the changes that have been occurring during the past three years are yet to be felt since these only concern how subjects are taught as opposed to what is coming in 2016, a whole new year of basic education. It is not surprising then to see especially parents who are now suddenly tuning to the issue.

The following is a survey made by Junie Laylo of the Manila Standard: 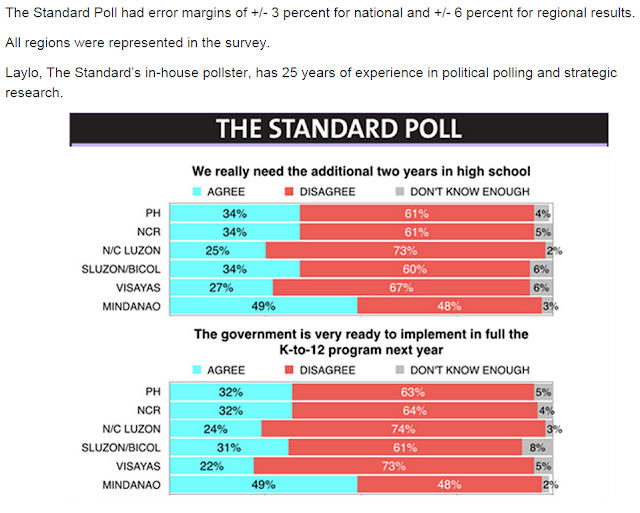 Whether the above survey showing a majority of the country opposing K to 12 is trustworthy or not is actually less important at this point. The obvious growth of opposition to K to 12 speaks volume especially if one considers the misinformation, the use of sound bites, and biased media coverage supporting K to 12.