June 15, 2016
Edu Punay of the Philippine Star reports "An insider in the high court believes a decision stopping implementation of the K-12 program, which took several years in preparation under Republic Act 10533 (The Enhanced Basic Education Act), is “not likely.”" It is indeed a shame if a court decides on something in a manner one normally expects from an executive branch, and not on judicial grounds. The various petitions against DepEd's K to 12 clearly have merit and for the court to issue its verdict on reasons other than the rights of those who are affected by Republic Act 10533 would indeed be a sad chapter in this blog's quest to improve Philippine basic education. Nevertheless, it should be clear that so many points have been raised here not so much to discredit the number of years in basic education, but to highlight gross errors in both formulation and implementation of current education reforms in the Philippines. Thus, whether the court decides in favor or against DepEd's K to 12, this blog would continue pointing out what is good and what is bad in Philippine basic education based on evidence.

There is clearly something onerous in Philippine basic education. DepEd's K to 12 only epitomizes a relinquishing of control of public education to the oligarchy and various business' interests. A Supreme Court that allows for K to 12 to continue basically tolerates the fundamentally antidemocratic means by which DepEd's K to 12 has spawned.

Basic education is not a business but a sacred responsibility of the government. The group Philippine Business for Education has recently reiterated its 7-point education reform agenda which includes:

(1) Crafting a long-term, strategic national development plan
(2) Ensuring good governance in reform efforts
(3) Commitment to lifelong learning for all
(4) Reimagining formal education
(5) Strengthening the alternative learning system (ALS)
(6) Responding to the challenges of today’s world, such as globalisation and climate change
(7) Working together in new and better ways, via industry-academe-government partnerships

In the United States, on July 8, a people's march for public education and social justice is scheduled. For this march, Save Our Schools has the following agenda: 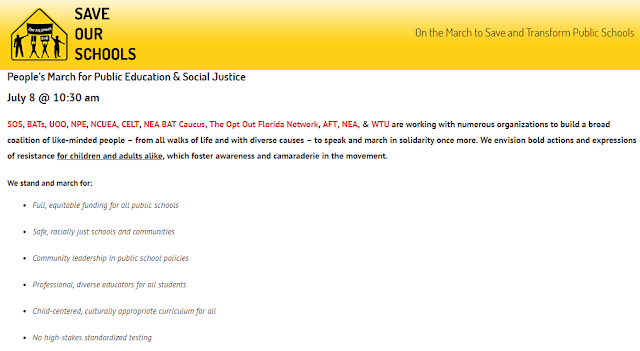 The points from Philippine Business for Education and Save Our Schools are like "night and day". The former thinks in terms of efficiency while the latter emphasizes equity. Rita Cucio raises an important question in her Facebook post below: 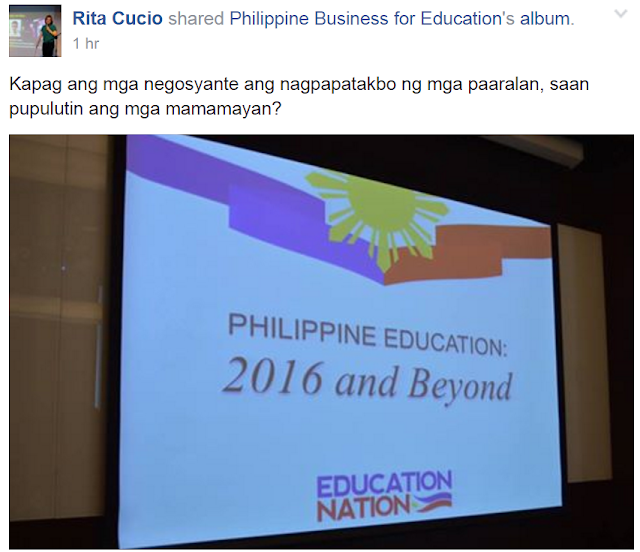 If businessmen are the ones running our schools, where are we going to pick up our citizens? In the gutter, perhaps.