Schools Should Be Ready for the Pupils

February 24, 2016
Dr. Justin Tarte, the Director of Teaching & Learning in the Union R-XI School District in Union, Missouri, brings to our attention in his blog, Life of an Educator, the following tweet from a superintendent in Vermont, Dan French: "School readiness should be about schools being ready for students not students being ready for school." 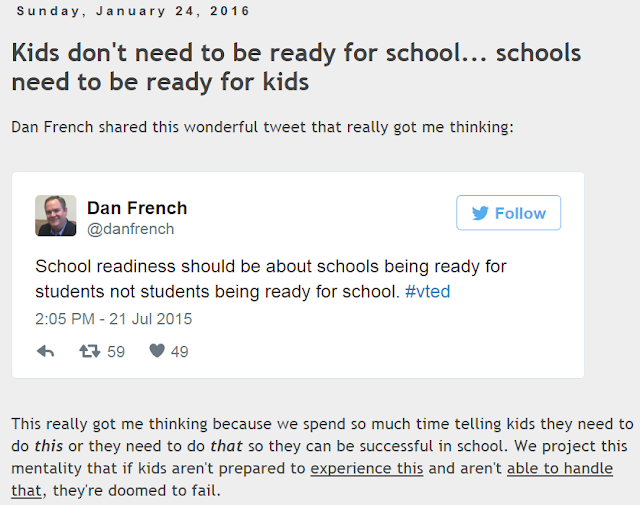 Then I came across the following post on the Suspend K-12 Coalition page:

With this in mind, it is worth reading what Joy Rizal has to say with regard to the Department of Education in the Philippines:

Enough is Enough. It IS time for a Change.

Well into the FOURTH quarter of our children's school year.
The time when DepEd should be preparing all the learning materials for the 2016-2017 school year so that the material can be delivered to all the schools by the end of May. Ready for the start of school in June.

But alas, The Philippine Department of Education with its normal substandard levels of honesty, integrity, and competence has not yet delivered any learning materials to this year's condemned K-12 conversion students. Material that DepEd adamantly and proudly promises year after year will be in the hands of the children no later than the end of June. (A MONTH into the school year, almost at the end of the first quarter of the school year.)

It seems strange that for yet another year DepEd gets a bigger budget while the condemned K-12 students get nothing. For yet another year DepEd ignores and/or evades oversight reviews. For yet another year the oversight committees do very little to hold DepEd accountable. Nor does there seem to ever be any meaningful sanctions against DepEd officials and employees that callously, without fear of repercussions, give inaccurate information, file blatantly false documentation and seem to have no concern about anything other than maintaining their delusions of superiority.
We could discuss as with every previous year of the DepEd K-12 education implementation fiasco how our nation's children are being condemned with no books, no learning material, for most of the school year (if materials are delivered at all). Yet DepEd continues to report everything is fine, they see no serious problems.
We could talk about how for yet another year DepEd refuses to acknowledge its overwhelming number of shortcomings. Several of the more serious short comings should lead to various levels of legal proceedings being held against many members of DepEd from the highest to the lowest levels.

Or we could talk about how for another year our elected officials vote to simply throw more money at our country's education problems. Apparently, yet again, without any method to hold DepEd officials or anyone accountable with serious penalties when DepEd again fails to meet even the most basic obligations to our children's education.

But alas discussing any of that would be simply repeating the same old issues again. Sadly issues are so similar year after year that new articles could nearly be completed by doing nothing more than cutting and pasting any of the previous years issues to the current year; often without even changing the names of the people involved.

Much like this article from 2013:
Congress Is The Philippines Biggest Criminal Syndicate
http://www.manilatimes.net/congress...

While some of the names, amounts and tactics may have changed. I wonder, if we simply changed the published date to 2016, I wonder if there have there been enough changes that more than a handful of people would even notice that the article is not current and actually discussing issues from several years ago? Or are we trapped in a stagnating, putrid, infinite loop of corruption, incompetence and indifference that is going to constantly doom our country and our children?

We have tried so many different things to try to get positive changes implemented. All of which over the years has been met with useless lip service, laughter, scorn, ridicule, even threats.
However, this year there is something different that can be done. Something that can cause a lot of the officials from the local level to the highest that have done little other than collect a paycheck and spout off useless nonsense to become very uncomfortable. Something that can get rid of the officials who seem to spend more time traveling to locations which have nothing to do with their job, than doing their job.

This year we can remind all these over paid servants what the word REPUBLIC means in The Republic of the Philippines.

This year we can 'fire' every elected 'useless corrupt dead beat' from the local levels to the highest offices and replace them with people that will not only do the job expected of them, but will also do everything possible to remove the appointed and hired parasites that create many more problems that harm everyone.
This year we have a chance to vote for and 'hire' only the people that understand that the oath that they take is more than just words they have to repeat in order to get a government paycheck, an office in a government building, as well as other perks.
This year we have the chance to vote to 'hire' just the people that have a strong, honest, history of doing what is right, not simply what is legal or tolerated.

This year we have a chance to vote to 'hire' only the people that will aggressively hold other officials accountable when the corrupt slackers fail to deliver quality work on time.

This year we have a chance to take a major step towards changing our country into the shining example of what a country should be.
This year we have to be brave and stand up to the dangerous powers that want to tell us how and who to vote for.

This year we have a chance to 'declare war' on every corrupt, dishonest, lazy, narcissistic government employee and show them who really controls this country.

This year we have a chance to start changing our country into something that our children will want to stay in rather than leaving the country trying to find jobs in other nations, often never wanting to return.

This year we have a chance to start turning our country into a leader of nations rather than continuing to be a pathetic 'foot stool' of other nations.

This year so many will say somebody needs to do something to change things in OUR country.

This year, I have but a simple question.

Are you nothing more than a pathetic, useless, NOBODY that deserves pig waste we are currently being dragged deeper into? Are you going to keep waiting on others to fix OUR nation’s problems?
OR

Are You a SOMEBODY that is going to do everything possible to challenge and stop the incompetence and corruption found in so many areas of our government? Are YOU a SOMEBODY that wants to make this country a shining independent world leader again?

We should project this mentality that if a Department of Education isn't prepared to experience this and isn't able to handle that, public basic education is doomed to fail.