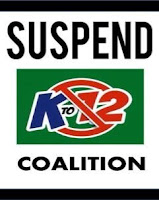 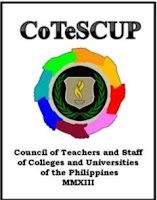 “Speak up for those who cannot speak for themselves,  ensure justice for those being crushed.
Yes, speak up for the poor and helpless, and see they get justice.”
(Proverbs 31:8-9)

On March 12, 2015, the Council of Teachers and Staff of Colleges and Universities of the Philippines (CoTeSCUP), along with 15 labor organizations and four individuals, filed a petition for Temporary Restraining Order (TRO) against the implementation of Republic Act 10533, more commonly known as the K-12 Law.  The petitioners questioned the constitutionality of the said law, and underscored how it violated the labor rights of professors and staff, and the academic freedom of the teaching personnel of higher educational institutions (HEIs). The succeeding three months saw other affected education stakeholders file their respective petitions for TRO on other constitutional grounds. All petitioners are united in the conviction that the K-12 Law is fundamentally flawed, and its full implementation in June 2016 is expected to have disastrous results.

Since then, however, we witnessed the slow turn of the wheels of justice.  After the Supreme Court has released an order that all petitions are to be consolidated, the Aquino Government, led by the Office of the Solicitor General (OSG), very slowly worked on the government response to the petitions that caused delays in the proceedings.   In the meantime, many HEIs have used the opportunity to streamline their personnel by offering ‘voluntary’ separation packages; owners of private schools rush to prepare for senior high school; public school teachers continue to lament the lack of preparedness for K-12; government agencies hastily craft ‘safety nets’ and guidelines; and parents and students become burdened with the confusion generated by the K-12 Law.   All of these resulted from the manner by which the Aquino government stubbornly pushed for such a massive educational reform despite the lack of consultation with affected education stakeholders, lack of educational infrastructure, and low absorptive capacity of education agencies to implement the K-12 Law.  The past 11 months of waiting for the Supreme Court to rule on the petitions revealed the many gaps and loopholes in the K-12 Law and its ongoing implementation, with its dire consequences already affecting the lives and livelihood of education stakeholders.

For these reasons, we humbly appeal to the Honorable Justices of the Supreme Court to rule on the merits of the petitions for TRO immediately. As the batch of Grade 10 students is at risk of being disenfranchised from earning a high school diploma and enrolling in tertiary education which they rightfully deserve, their parents are saddled with additional educational expenses, and HEI professors and staff are made to desperately cling to their jobs.  Time is of essence, and further delays in the ruling will only compound the confusion, agony, and anxieties already being experienced by those on the ground. We ask the Supreme Court to decide on the side of the teachers and staff, parents and students, who have been pushed to the margins by a law that purportedly honors international commitments, but victimizes citizens and violates the Constitution. We have much respect for the independence and prudence of this Supreme Court, and as our last resort, we look forward to a decision that favors the most disadvantaged stakeholders in the education sector --- teachers and staff, parents, and students.