A Report Card for the States

February 04, 2016
The second grading period ends today at Fairfax County schools. Tomorrow, students are not going to school as their teachers prepare report cards for the grading period. These cards attempt to summarize how a student has performed in school. Report cards are meant to evaluate, but more importantly, these marks are ways by which a teacher communicates with students and parents: This is how you are so far in school (for the student), or this is how your child is performing in school (for the parent). The Network for Public Education (NPE) has done something similar. However, in this case, NPE is evaluating the performance of each of the states in the US on public education. The grades are not at all flattering. The best grade is a C, most common is D, and there are a significant number receiving an F:


Obviously, when grades are provided, especially when they are bad, it is only normal to ask how one has arrived at these marks. NPE uses the following categories:

High stakes testing means students' scores in standardized tests become the sole basis for making important decisions regarding students (their promotion or retention), schools (closing and funding) and teachers (merit, salaries, promotion, dismissal). Professionalization of teaching looks at how states support teacher preparation, development and autonomy. Resistance to privatization considers how a state strengthens public schools without resorting to market-based approaches. School finance examines how a state funds schools in an equitable fashion. In the "Spend Taxpayers Resources Wisely" category, states are graded according to the choices they make, for example, on whether they are spending on extra efforts that have evidence from research. "Chance for Success" looks at the societal factors. Poverty is one. The socioeconomic status of a community can be partly traced to how a government functions so it is only natural that the effects of socioeconomic status on education be regarded as part of a state's role in public education. Since the overall grades are not good, it is not surprising that most states are likewise not doing well in each of these categories:
A teachers' group in the Philippines have also been issuing a report card for the Aquino administration in the past few years. Here is one. 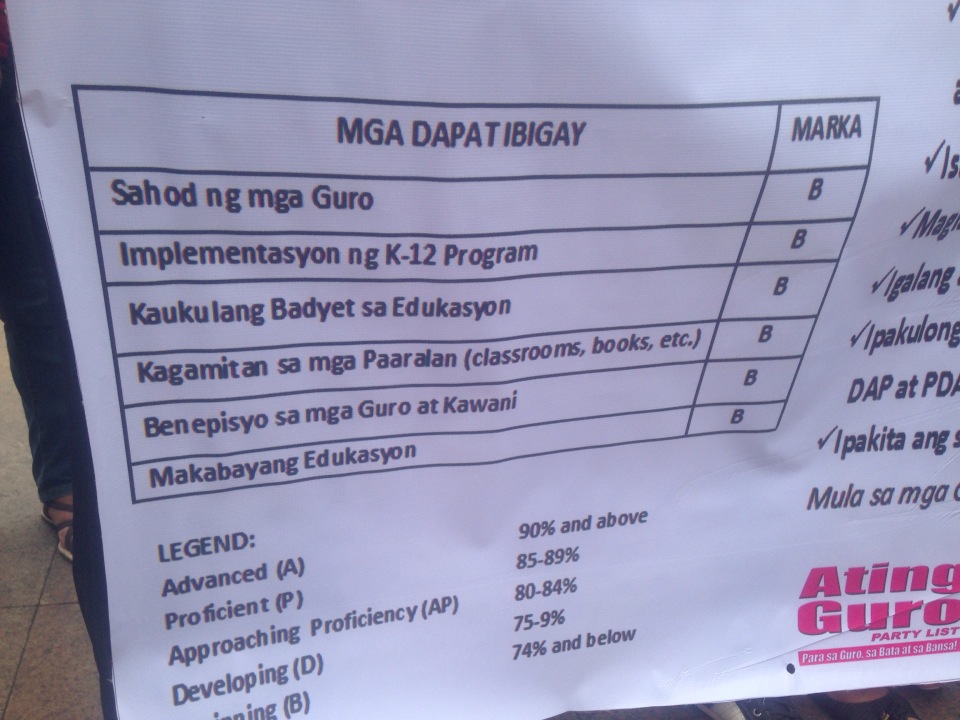 P-NOY GOT FAILING MARK FROM TEACHERS
"The teachers made their assessment of the Aquino administration’s performance through a “Progress Report Card” using the K-12 grading system in several ‘key result areas’ or actions that were expected from the administration which include the increase in the salaries and benefits of teachers, sufficient education budget, fund allocation for K-12 program and patriotic education. The president got a failing grade B (for beginning), in all of those aspects and was advised to provide the needs of the education sector in his remaining years in office."

At first, this may be confusing, because it uses the letter grades introduced by the Philippines' Department of Education. In this scheme, "B" is in fact the failing grade. The subjects listed above are no different from the ones by NPE. "Sahod ng mga guro" (teachers' salaries) is obviously an important factor in the professionalization of teaching. "Implementasyon ng K-12 program" (implementation of the new K-12 curriculum) goes at the heart of asking whether a government is spending taxpayer resources wisely. "Kaukulang Badyet sa Edukasyon" (adequate funding of education) and "Kagamitan sa mga Paaralan" (providing schools with the necessary resources) are both under NPE's School Finance category. In other words, there is no doubt that the Aquino administration will likewise receive a failing grade based on NPE's criteria.