What We Teach Reflects Who We Are

August 29, 2014
Back in high school, although there were both male and female students, there were specific subjects in which boys are separated from the girls. There was "Home Economics" in which female students were enrolled and there was "Practical Arts" which male pupils took. This was almost four decades ago when gender roles were still prevalent. This was how most Filipino families were set up while I was growing up, the woman was a full time home keeper while the man was the breadwinner.

Schools are indeed reflections of the society since after all, we do choose what we teach our children. Take for instance the various states in the United States. In places like Massachusetts, there is no debate on whether to include "Intelligent Design" as part of the science curriculum while in some "red states", the discussion still goes on. The curriculum, what we want our children to learn is shaped by what we value. It is drawn according to our image.

The objections raised in this blog regarding DepEd's K+12 center more on the implementation side, asking the question of what works and what does not work in education. Anyone can easily list standards and skills that need to be covered, but in the end, the real question is whether pupils would learn the material or not. This blog has raised the importance of the early years, the great significance of providing as much resources as needed to kindergarten and the elementary years. The blog has often focused on the central role a teacher plays in education. This blog has questioned the way science is being taught. With regard to the curriculum, however, one may actually be going beyond the walls of a classroom.

Some may brag about a 21st century curriculum. Human knowledge has expanded greatly. It is hoped that human wisdom has been refined as well. This is how a curriculum changes with time. The science curriculum is shaped by practicing scientists as they discover and realize what needs to be taught inside schools. The same goes with math, reading and the other subjects. For this reason, debating what is inside a curriculum goes far beyond education. DepEd's K+12 is flawed not because of its curriculum, but because of its implementation. And it is really just the implementation that can be evaluated using research-based evidence. Thus, stating that DepEd's K+12 is faulty in its implementation is equivalent to saying that DepEd's K+12 is wrong. It is the only part that can be evaluated. Whether K+12 prepares the youth for employment is a curriculum question. How one answers this issue depends on one's values. It is outside the science of education.

Seeing the following exam question (posted by Renato Reyes Jr. on Facebook), one should pause for a moment and realize that this is beyond DepEd. This is in fact a reflection of Philippine society: 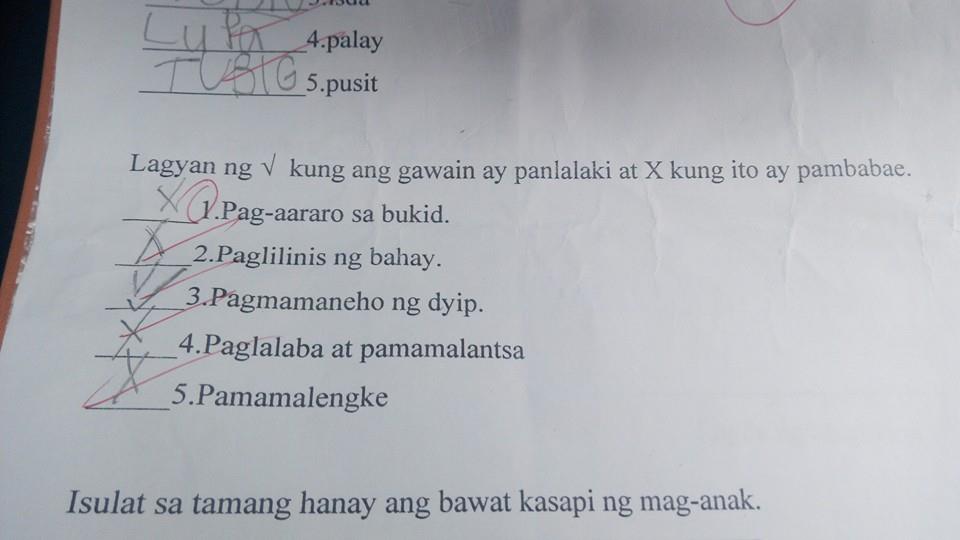 The question is in Tagalog, so here is the English translation:

Place a "check" mark if the activity is for males and a "cross" if it is for females:

With this post, Reyes asks the question, "Dear DepEd K-12 curriculum planners: What in the world were you thinking?" I think a more appropriate comment is that this only reflects how the Philippine society still thinks. This is so much bigger than DepEd. The curriculum is simply a mirror that reflects our own image....