August 11, 2014
The forecast of dropout rates in high school doubling has been made with regard to the introduction of a new curriculum. This prediction, however, is with regard to the United States' new Common Core and Next Generation Science Standards. This is about an educational system far more funded and prepared to tackle changes in curriculum. There are new textbooks as well as assessments that are now aligned with the new curriculum. Yet, the forewarning is serious based on a report by the Carnegie Corporation of New York, "Opportunity by Design: New High School Models for Student Success".

The above estimate is based on an extrapolation from how well students are currently doing in the previous years. By contemplating, for example, on how many students entering high school back in 2009 are unprepared, it is straightforward to see lots of trouble ahead:

With more than two thirds performing below proficiency at the end of eight grade, it only follows that high schools are going to be much more challenged. High schools need not only to get in line with the new curriculum, but also need to address remediation for a large number of students. To grasp this problem closer to home, one must imagine what parents would do when their children are falling behind. Parents who could afford would hire a tutor. Remediation requires teachers. Thus, it is only natural that the Carnegie report ties in the above challenge to an increase in demand for teachers. Only teachers can really solve this problem, not a curriculum. Assuming that for four years, students get an extra teacher in math, the following has been estimated:


Even improving teaching is clearly not enough. As the report concludes:

DepEd's K+12 should have had a similar study. If DepEd had a study, the conclusions are going to be very similar, in fact, it would be much more ominous. The performance of Grade 6 students in the National Achievement Test has always been below the passing mark of 75%: 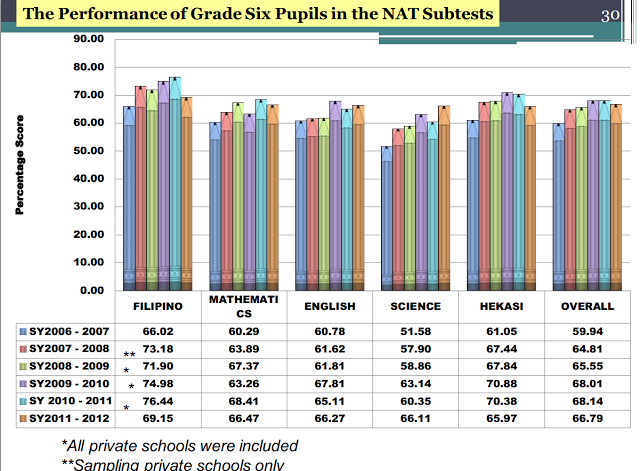 More than half of students entering high school are failing. Yet, a new curriculum is haphazardly being implemented in basic education. The new curriculum not only involves adding two years at the end of high school, but also substantial changes in how science and math are taught. There are no learning materials and teachers are poorly equipped to deliver the new curriculum.

It takes little effort to imagine new ways of learning. It takes no effort to sound fashionable. Those sound bites can be mesmerizing. It is no different from dreaming. But without thoughtful examination and research-based evidence, a new curriculum could easily be a nightmare.