Filipino Does Not Unite But Only Divide Us

August 23, 2014
Spending my first year at the Ateneo was somewhat horrible when it came to language. I felt forced to read, reflect and write in a foreign language, English. My high school days were part of an experiment of the Marcos regime during which most subjects except English were taught in a bilingual manner. As a result, I did not have that much opportunity to think, converse and write in English. I felt a fresh breath of air during my last two years in college during which had the option of learning philosophy using my mother tongue. Yet, at that time, I did acknowledge that in order to master chemistry, I must become proficient in English. The reason was very simple. All the textbooks in chemistry were in English. Slowly, I started thinking in English while learning chemistry.

At Georgetown or any other university that has a graduate program and accepts foreign students, proficiency in English is required. Graduate students are required to serve as teaching assistants, thus, they must be able to speak English so that undergraduate students would be able to understand. Based on experience, both undergraduate students and professors are quite accommodating when it comes to accents. Grammar rules are likewise relaxed as long as the chemistry is correct. It is truly amazing how much respect and understanding is extended when it comes to language. Language is indeed a part of ourselves. It is the medium through which we express ourselves. It is the bridge crossed by our own emotions and thoughts. Without language, it would be difficult to share our ideas and feelings with others. Language is the blood of our own being.

In the Philippines, the debate on language continues and it is not pretty. David Michael San Juan provides not just one but twelve reasons why it is necessary to save the Philippines' national language on Rappler: 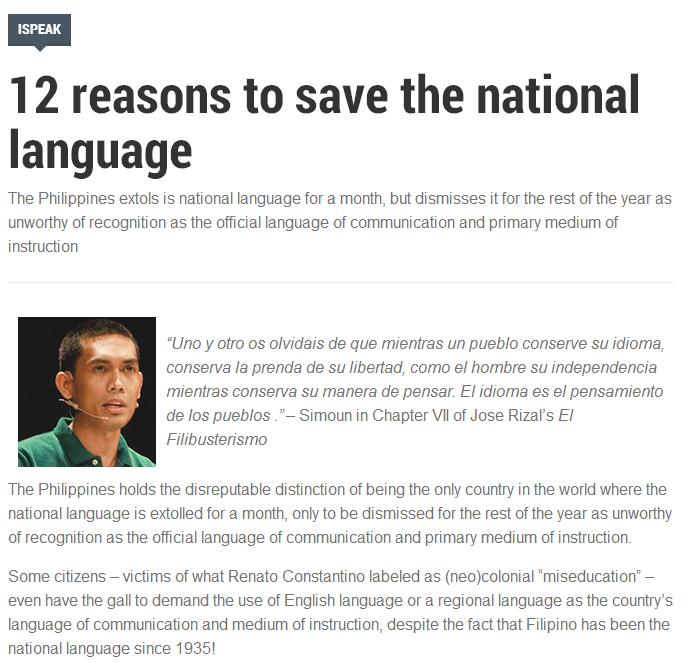 Of course, there are people who do not share the same view and to these opponents, this is what David Michael San Juan has to say:

Unfortunately, it does not really matter how many reasons are provided for imposing the national language on everyone because there is no reason that could erase the following fact. There are so many languages spoken in the Philippines:

Although Tagalog, on which the national language is based, garners the highest percentage of households, one cannot deny that the other languages have a significant share of native speakers. Percentage is not really that important, but right to one's mother tongue is, so it really does not matter whether a language is spoken by the majority or not. In terms of percentages, there is really no native language in the Philippines that is spoken by more than half of the households:

Tagalog does have the highest number, but it falls short of fifty percent. And in terms of linguistic rights, even the smallest dot in the above figure has a say. One could promote a national language. One could make up a language and claim that it is a mixture of all the above languages. But no one should impose such language. It is bad enough that all students in the Philippines are forced to learn this made up national language through K+12. It is an attack on one's identity and culture to impose the same in higher education. The use of English as a medium of instruction in higher education should not be seen as an imposition of a colonial foreign language. This choice is not based on any ideological ground. It is purely academic and only practical. On the other hand, imposing a made up national language is based solely on a false sense of nationalism. It is based on a fantasy of having one language uniting all of Philippines. This is not the true Philippines. The Philippines is a very diverse country in terms of tongues. We must embrace that and not make up something artificial that places us against each other. Our only objective is to help children realize their part in this globe. Our only mission is to teach our children, not to brainwash them with something we have only imagined and created.

Our teachers need support. Our schools need support. Let us focus on what matters to learning. Let us emphasize what works. And we need to make sure that in doing so, we still respect each other's language, because language is part of our soul....