As one of the richest persons on this planet and as one of the few who not only had the vision, but also the commitment and drive to create machines that can operate flawlessly, Bill Gates may actually have something worthwhile to hear with regard to the challenges and future of education. Gates did drop out from Harvard and did not finish college but he left formal schooling for a reason. He saw a rare opportunity and perfect timing was key. He knew that the right time was then and no later. He knew of the competition and one thing he was really good at was beating the competition.

To an audience of pupils from a school in Bangalore, this is what Gates said when he was asked by a student named Nengneilam Haokip on why he left Harvard University: 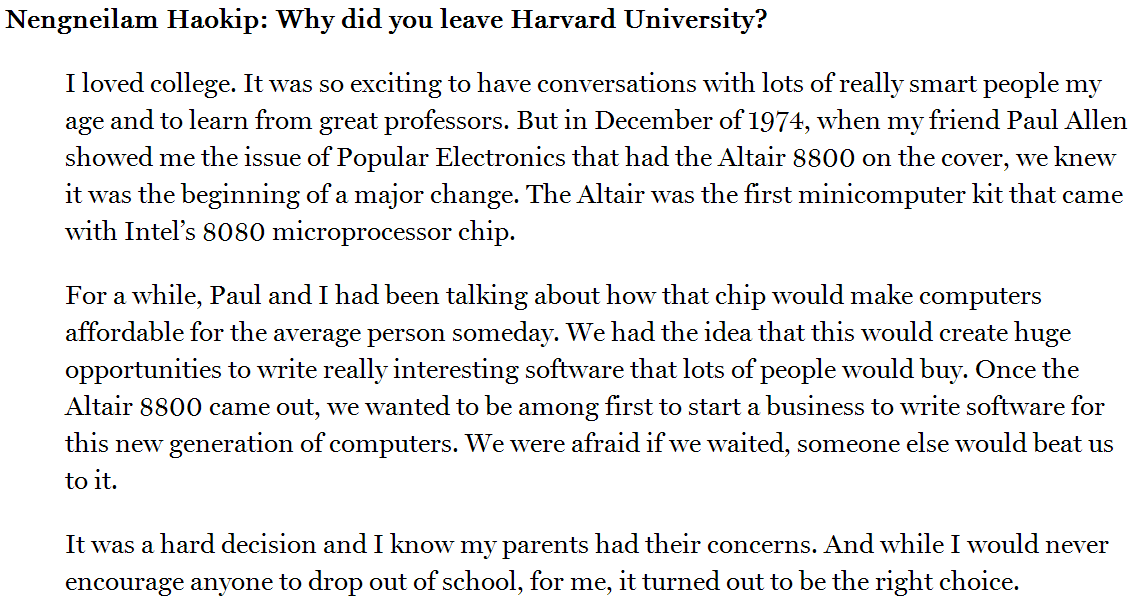 So when Gates delivers an address to the business officers of colleges and universities at the recent annual meeting of the National Association of College and University Business Officers (NACUBO), it is not surprising to see a mixed set of emotions and judgments. InsideHigherEd has an article entitled, "A More Nuanced Bill Gates". The article describes Gates' address as follows:


But his remarks, and his answers to a set of questions posed by Miami Dade College's Rolando Montoya, displayed a level of nuance and sophistication about higher education that would probably surprise those who have read his well-publicized comments urging state governors to emphasize disciplines that create jobs and envisioning a wholesale embrace of massive open online courses by community colleges.

In a clear critique of the Obama administration’s proposed college rating system, he warned against simplistic efforts to judge colleges' quality: he discouraged a singleminded focus on college "completion.” He described as "oversimplistic" the view that higher education is "just about getting a job with a certain salary” — “Citizenship, developing deeper understanding, other things, are all important," he said.

The above is really no different from his response to schoolchildren in Bangalore. Gates understands that the strength of a higher education institution lies in the community of learners it establishes. It is about face-to-face relationships.