July 21, 2014
Inside the 309 billion peso 2014 budget for the Department of Education (DepEd) in the Philippines is a 7.45 billion item intended to help families who are sending their children to private schools. In the latest government report, more than 800000 pupils have been assisted by the program formally called Government Assistance for Students and Teachers in Private Education (GASTPE). This subsidy amounts to about 9000 pesos spent by the government per pupil. Back in 2009, using World Bank data, Seth Mydans of the NY Times estimated that the Philippine government spends about 6600 pesos per pupil enrolled in its public schools. There is the question, of course, of why the government needs to run two programs. There are 21 million students currently enrolled in the public schools, a system marked with acute shortages in resources: classrooms, learning materials, and teachers, yet the government still reaches out and helps families who have their children studying in private schools. The idea of having a public school system is to provide education for all yet there are programs that do not apply to all. 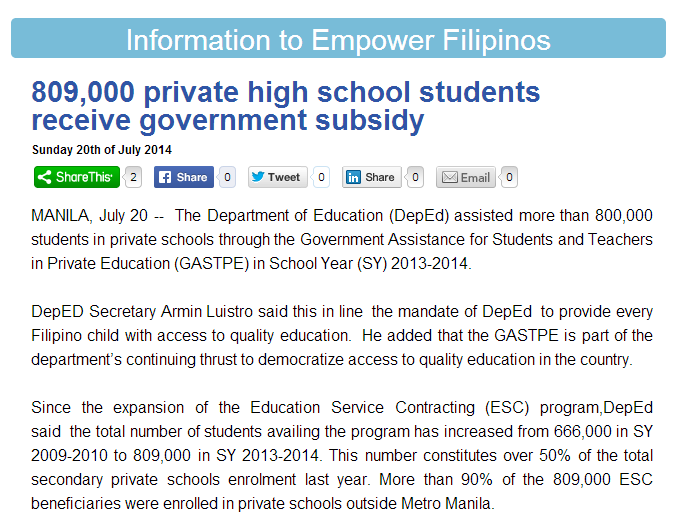 The country of Chile provides plenty of evidence on how these programs actually work. Unfortunately, the evidence merely points to even greater inequality. Here is a recent peer-reviewed article from the Education Policy Analysis Archives: 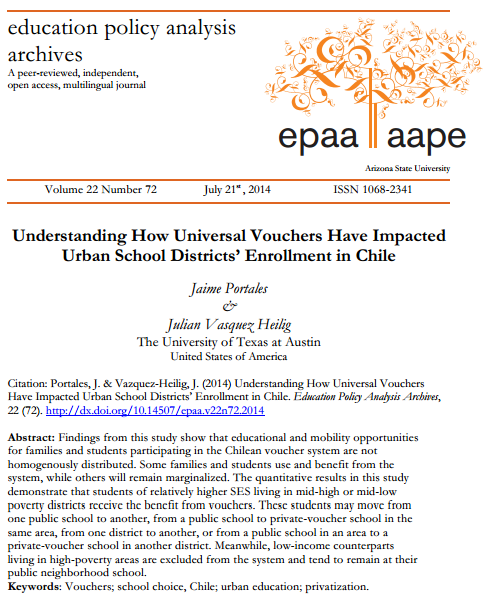 Why a government would provide funds for families to send their children to private schools is really a question that needs to be addressed by education policy makers. In Chile, there was the expectation that competition between private and public schools may lead to increasing quality in all schools. Unfortunately, this does not really happen in education. Schools are not factories. Schools, unlike factories, could and should not really choose their starting material. If competition becomes the underlying principle, quality is in fact compromised. It is easy to make a school look good by simply being selective in its enrollment. Another point is that the government must really focus on the system that it has especially when it is not even able to address all the needs of its own system.

One last point specific for the Philippine program is the fact that the subsidy does not really cover all of the tuition fees. It covers only a fraction. It is clear therefore that the program benefits only those families who can afford to pay at least partly private school tuition. It is not meant for the poor, but for the middle class and the wealthy. Thus, right at the very beginning, it is a program that is really meant for higher-income families.

Pasi Sahlberg of Finland talked a couple of months ago at the First Parish Church in Massachusetts. During his presentation, Sahlberg said:


There are three unique aspects of Finnish system. One: We have a school system that is based on 9 years of compulsory and comprehensive schooling that is the same for all children. There is no other system in the world where all kids have the same school experience in their own neighborhood. We don’t have charters, independent schools, etc. We have a few specialty schools such as Waldorf, etc., but very few. Most schools in Finland are part of the public school system. It was created about 40 years ago. All private schools were abolished. We insisted that every school must be a good school.

Education for all means only one thing. It is not education only for some, it is for all. When will we ever learn?

Commentaries Education for All