July 22, 2014
Change is inevitable. Yet there are universal constants. Not all change is good. There are changes that happen beyond our influence or control. And there are changes that we ourselves bring to realization. When we innovate, we look for improvement. This type of change for the most part involves a process, but it cannot be divorced from the outcome. In fact, this type of willful change is only good if it is for the better. In a new report from the OECD, Measuring Innovation in Education: A New Perspective, Educational Research and Innovation, countries have been ranked in terms of changes in schools' practices and policies. Vincent-Lancrin, lead author of the study, has been quoted as saying, "Innovation is a means to an end, we need to think of it not as an indicator of performance itself, but something that will translate into better educational outcomes." Whether an innovation leads to an increase in quality in education deserves to be asked. Assuming innovation is a good in itself is dangerous. Such thinking reduces education to something similar to business where innovation is a must to survive. In education, not all changes are good and not all changes are justified.


Becoming worse is a possible outcome of change. Innovations that lack careful examination can easily turn out to be a disaster of our own making. One of the key findings of the study is the following:

The new DepEd K+12 curriculum in the Philippines could easily high scores on innovation. After all, the changes brought by the new curriculum are certainly dramatic and numerous. The changes would cost more than a hundred billion pesos. Yet, the changes are much more likely not to benefit basic education in the Philippines at all. Simply because reforms or changes are being introduced to a basic education system does not automatically mean improvement in quality. The world has enough evidence that this is not the case. Innovation does not necessarily correlate with quality as seen in the following figure published by the OECD report: 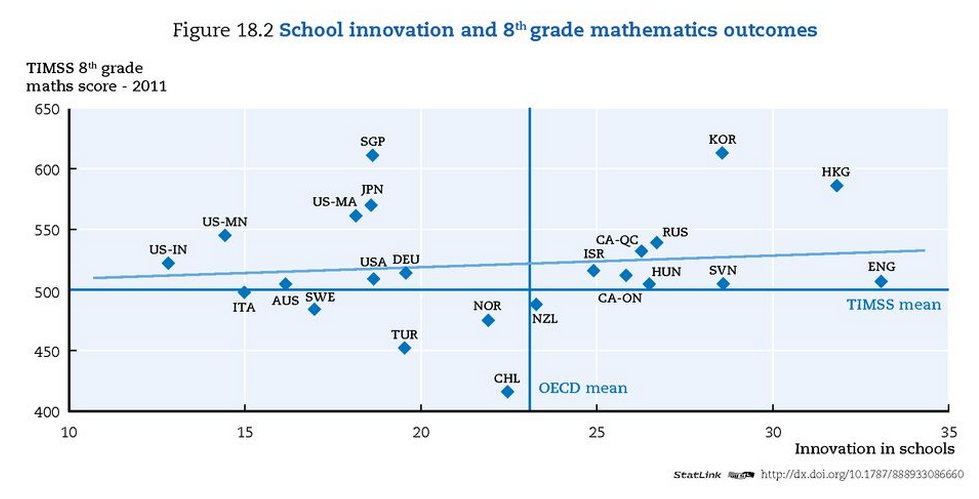 A slightly better correlation may be observed if the innovation is occurring not on a large scale but inside a classroom: 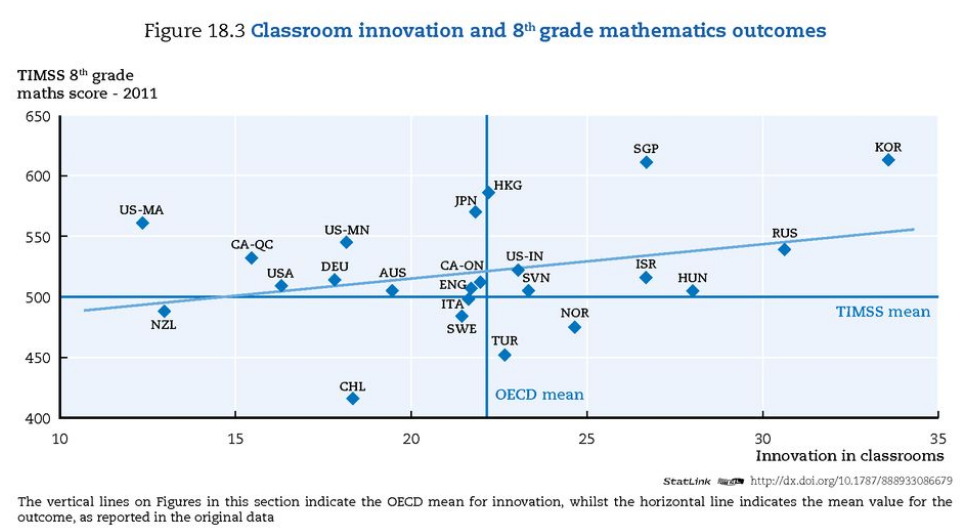 Still, the correlation between innovation and learning outcomes is really weak. Indonesia ranks high in innovation, but this country is near the bottom when it comes to international standardized exams:

The schools in Massachusetts are way behind. Weiss and Payzant wrote on the Huffington Post:


Massachusetts is the good news story. If it were its own country, it would rank sixth in reading of 65 countries and economies included, behind only Singapore, Japan, Korea, and the Chinese regions of Shanghai and Hong Kong. Its students rank just above Finland and Canada, some of the world's best readers. Though its math scores are slightly lower, Massachusetts keeps company with Belgium and Germany and is only slightly behind Finland and Canada, ranking 16 of 65. In science, Massachusetts ranks 11th, ahead of Canada and Germany. Connecticut, the second of three states with its own scores, falls just below Massachusetts, ranking 9th in reading, 18th in math, and 17th in science.

While the Jakarta Post had the following for Indonesian education:


The PISA results for Indonesian students are the second lowest in the league table, worse than the last PISA in 2009, when Indonesia ranked 57th. The result shows the Indonesian education system is going nowhere, despite massive investment.

Some may argue that if innovations exist then at least the government is paying some attention to basic education. But education is so much like health care, do no harm must be the first and foremost rule.