Should Teachers in the Philippines Go On Mass Leave

May 20, 2014
Strikes are quite rare. Workers only resort to an organized stoppage when their demands are not being heard. Strikes can be very disruptive especially when these involve public services. In some jurisdictions, there are some professions where strikes are not allowed. For example, in New York, its labor law prohibits strikes of all state public employees. One could imagine that the main argument behind such prohibitions is serving the public interest. Some of these services are very crucial and work stoppage can lead to substantial harm to the public. Such argument has often been used to ban strikes by teachers in public schools. The question of whether such strikes harm learning outcomes still remains to be addressed. Contrary to gut instincts, a causation relationship between teachers' strikes and poor learning outcomes is not clear from evidence. One must keep in mind that strikes are means of last resort, thus, when strikes occur, there is a very high likelihood that schools are already in trouble. This applies for example to public basic education in the Philippines. Here are two headlines:


Teachers' strikes are not purely driven by the interests of the teachers. When teachers are overworked and underpaid, such conditions will take a great toll on students' learning outcomes. Poor working conditions can adversely affect student learning in the classrooms. Teachers go on strike to raise awareness and alert the public of something seriously wrong about public school education. Strikes always happen when there are problems already in school. For this reason, it is quite difficult to address the question of whether teachers' strikes harm learning. Furthermore, when strikes do help teachers get their demands met, these may be solutions to the schools' problems and can therefore affect the students in a positive way. Nevertheless, there are studies that tried to answer the question. From these studies, the conclusion is that there is really no hard evidence that teachers' strikes harm students. Here are two studies. The first one is a study on a strike in Belgium that took six months. These are six months of no school, yet the deleterious effects are still not super evident. Although the abstract of the paper seems to suggest that there is something clear, the actual data and various excerpts do not support such conclusion. 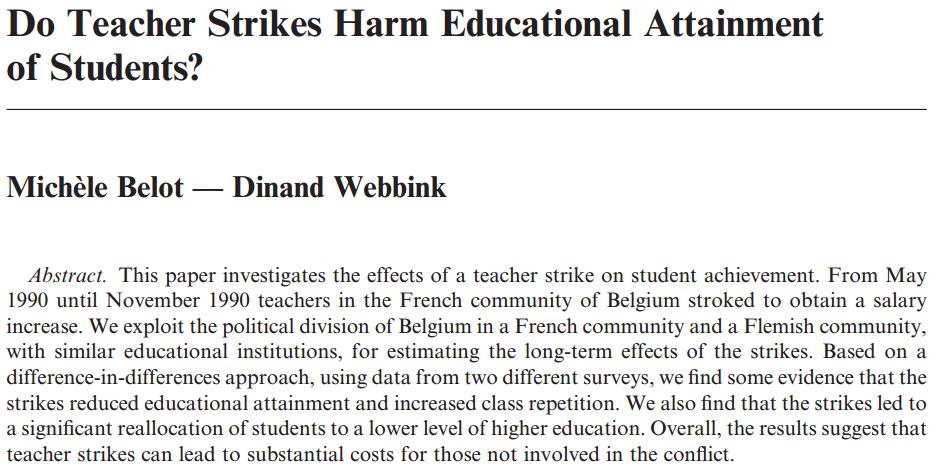 Here is an excerpt describing why addressing this issue is particularly difficult:

The following is the figure from which the conclusion is drawn. One should keep in mind how expanded the y-axis scale is in this graph. The changes, in absolute terms, are really small. 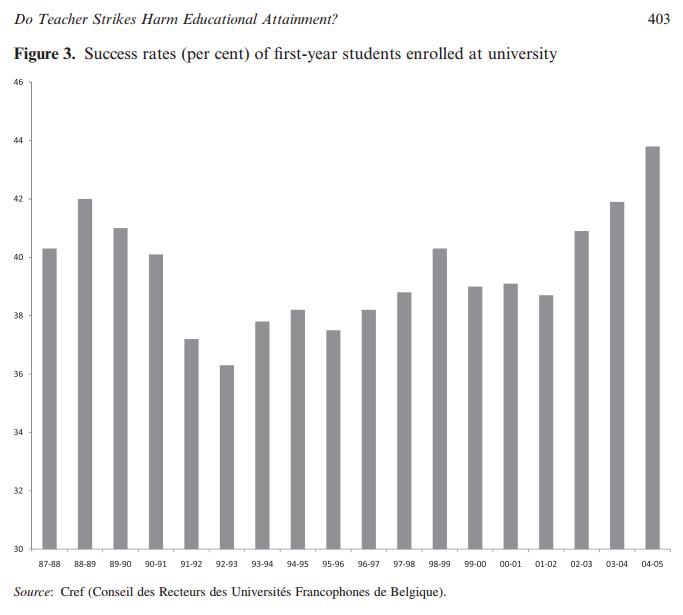 A second study is from Pennsylvania. Here, the strikes are not that long in duration, but are more frequent. Here the conclusion is clear: “This study supports prior research in finding that Pennsylvania teacher’s strikes are not associated with negative academic outcomes, measured here by district level PSSA test performance, attendance and graduation rates.”


By Dr. Harris Zwerling
PSEA Assistant Director of Research
Read the full report (PSEA Member login required)
Note: This paper is an earlier version of a paper with the same title published in the Journal of Collective Negotiations, Vol. 32(3) 151-172, 2008.
Critics of Pennsylvania teacher strikes have claimed that strikes have an adverse impact on student achievement. However, they have produced no evidence to support this claim.
In response to continued public discussion of the impact of teacher strikes, Dr. Harris Zwerling (Assistant Director of Research - PSEA) conducted a study of the potential academic effects of strikes, using Pennsylvania System of School Assessment (PSSA) test scores from 2003-04 to 2006-07 and several different statistical models.
Dr. Zwerling was unable to find any statistical relationship between the incidence of teacher strikes and their duration and district level student performance on 46 different PSSA tests. His study supports prior research in finding that Pennsylvania teacher strikes are not associated with negative academic outcomes, measured by district level PSSA test performance, attendance and graduation rates.
Since the passage of Act 88 in 1992 through 2006-07, 21.1 percent of Pennsylvania’s 603 School Districts, IUs, and Vocational Technical Schools have experienced teachers’ strikes. Only 3.6 percent have had more than one strike in that 15-year span. Seventy-seven percent (384) of Pennsylvania’s 500 operating school districts have not experienced a teachers’ strike during this 15-year span.
From 1970 to 1992, there was an average of 27.6 teachers’ strikes annually. Since the passage of Act 88 (through 2006-07), there has been an average of 8.6 teachers’ strikes per year. The average duration of teachers’ strikes has not subsequently returned to the levels reached during the 1970s and 1980s. From 1970 to 1992, the average duration of teachers’ strikes was 15.4 days. Since then it has dropped to 12 days.
During the last two school years, the number of teacher strikes increased to 13 each year. Prior to that, the number of strikes had reached double digits (10) only once in the last decade (2002-03).
Dr. Zwerling examined PSSA scores, graduation rates and attendance data of school districts which have experienced teacher strikes between 1992-93 and 2006-07 and compared those districts to school districts which had not experienced strikes during the same period.
He concluded, “This study supports prior research in finding that Pennsylvania teacher’s strikes are not associated with negative academic outcomes, measured here by district level PSSA test performance, attendance and graduation rates.”
There are two other reasons one might expect that Pennsylvania teachers’ strikes would have no relationship to PSSA performance. First, the 12-day average duration of teachers’ strikes between 1992-93 and 2006-07 is little longer than the typical Christmas recess. Second, Pennsylvania’s Act 88 of 1992 requires that days lost to work stoppages must be made up so that schools must provide a minimum of 180 days of instruction.
Strikes are difficult and unpleasant experiences, and will continue to be a last resort for our members when negotiations fail to reach a settlement. But Dr. Zwerling’s research debunks the claim that strikes have a negative impact on academic performance.