Should Teachers Fight for Higher Salaries?

May 24, 2014
Qout Capita Tot Sensus. There are as many opinions as there are heads. This is basically what one gets when one asks how the dismal situation of Philippine basic education can be addressed. Take, for instance, a recent meeting held at the Asian Institute of Management in Makati that recently addressed the "poor quality" of teaching in the Philippines. Some focused on the licensure exam - as if an exam could really define the quality of teaching. Some looked at the grades of high school graduates entering the teaching schools. Some even provided evidence that people who have finished a college degree before going into a teacher education program were more effective. One person, however, Dr. Cris Acido of the University of the Philippines College of Education, was quoted as saying:


“We don’t get the best minds because of the status we have given the teaching profession. Giving higher salaries could be a move in the right direction."

This opinion given by Acido is in fact based on evidence. Teachers' salaries are tied to student performance and learning outcomes. The European Union, for example, tried hard to distill what makes quality educational systems work and found that teachers salaries and learning resources are the ones that correlate positively with student performance (Agasisti, T. (2014), The Efficiency of Public Spending on Education: an empirical comparison of EU countries. European Journal of Education. doi: 10.1111/ejed.12069). The correlation between teachers' salaries and quality education, however, is not simply a correlation. It is causal and as Acido correctly states, the mechanism involves attracting the required talent to the profession. Here is a study from the state of Pennsylvania:

Results from a study on the Los Angeles school district agree with the above.

Unfortunately, no one in power seems to be listening. Teachers in the Philippines have been asking for a salary increase for years now, yet their requests seem to keep falling on deaf ears. Hence, the Alliance of Concerned Teachers (ACT) are planning to take a mass leave right at the beginning of classes this coming school year. 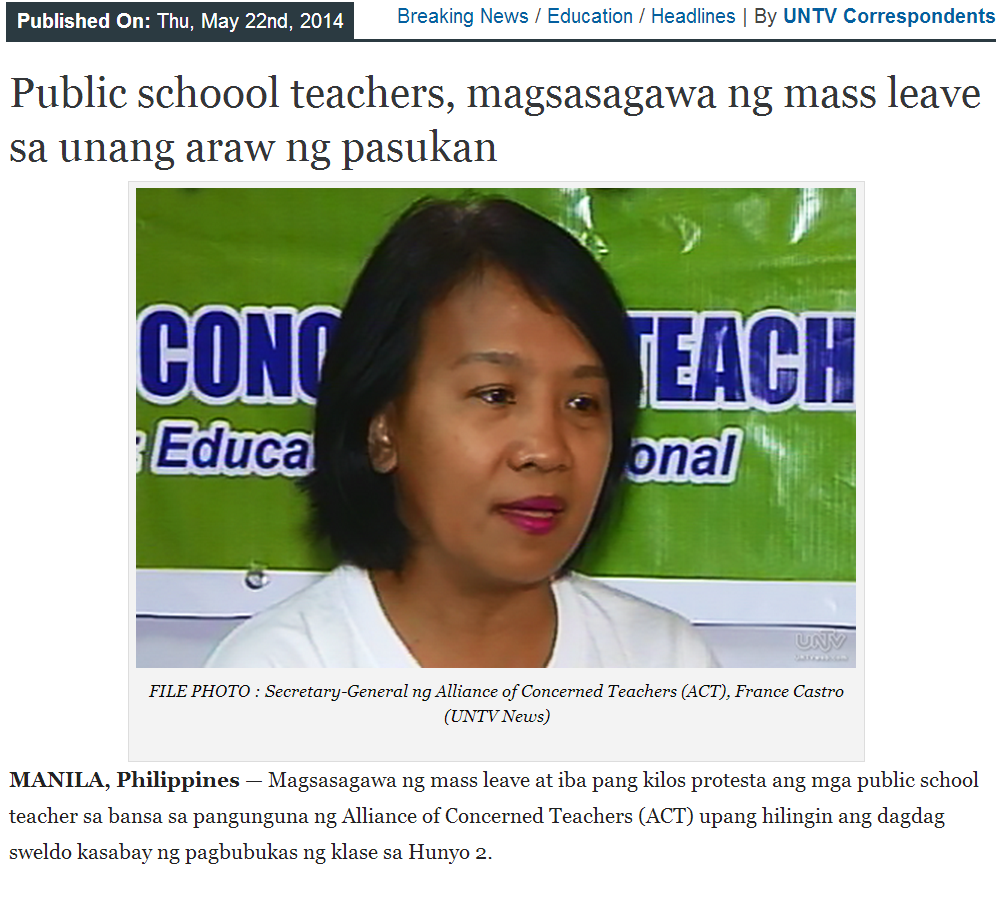 The following is the response from ACT-Davao regarding the announcement made by Philippines DepEd secretary Luistro that there would be no salary increase for 2014:

“We are saddened that our DepED Secretary, Br. Armin Luistro is the bearer of bad news for us teachers. On the other hand, we welcome his pronouncements that he supports our call for the increase in teachers' salaries. As the head of our agency, and as a cabinet secretary to BS Aquino, he should be more vocal about his support,” declared Elenito Escalante, President of ACT Davao Region Union and a DepED high school science teacher.

Pilar Barredo, a DepED teacher herself and the group's Secretary General added, “Br. Armin's announcement in the news today did not surprise us as our ACT TEACHERS Partylist Representative, Cong. Antonio Tinio always updates us regarding the goings on in Congress where increases in teachers' salaries are approved or disapproved. We, public school teachers, are determined more than ever to aggressively push for the immediate approval of our House Bill 245 mandating the increase of teachers' salaries from P18,549 to P25,000 and the salary of non-teaching personnel from P9,000 to P15,000.”

“Moreover, as a religious person, we urge Br. Armin to aggressively speak against pork barrel in the Congressional PDAF and the even bigger Presidential DAP. Any government official or private individual has no credibility whenever they say that there is no budget for the increase in teachers' and non-teaching personnel's salaries when there are billions for corruption,” said Escalante.

“Such has been the role of Liberal Party stalwart and DBM Secretary Butch Abad, himself a former DepED Secretary, along with other key LP allies in Congress and Senate. They keep sabotaging our House Bills during hearings in Congress, meanwhile, BS Aquino who leads the LP refuses to certify our House Bills as urgent or of priority. We thus urge Br. Armin to stand, speak, and act with us,” concluded Barredo.


The teachers are fighting for what is actually good for Philippine basic education. A mass leave will be disruptive, but inaction simply perpetuates the dismal condition of education. As Abraham "Ditto" Sarmiento, Jr. said, "Kung hindi tayo kikilos, sino ang kikilos? Kung di tayo kikibo, sino ang kikibo? Kung hindi ngayon, kailan pa?" (If we do not act, who will act? If we do not care, who will care? If not now, when?)