May 22, 2014
The gap between the rich and the poor with regard to learning outcomes in basic education is real and huge. It is quite easy to find data that convincingly show such gap. Take for instance the SAT scores divided across socio-economic status. In a scale of 400-1600 points, disadvantaged children average 544, while students from wealthy families average 1328. Of course, these are averages. Among poor children, there are high scores as well. What is equally disconcerting is that graduation rates among the best students coming from poor families are likewise problematic.

There are children from poor families in the US who score in the 1200-1600 range. In fact, it is not difficult to find someone who grew up poor yet managed to succeed in college. I am one example from the Philippines, who grew up poor, but managed to score very high in the GRE Chemistry exam. Unfortunately, isolated instances or anecdotes do not help us see the big picture. This is where statistics can assist us in arriving at a correct assessment of the situation. Not doing so would simply not allow us what could be done and what should be done.

Unfortunately, thriving at the basic education level is no guarantee for success for a child growing up in poverty. Scoring high in SAT and getting accepted in a good university do not preclude failure. In fact, statistics show that he poverty gap continues even among students with above average academic ability or potential. The following is a table from the book Rewarding Strivers: 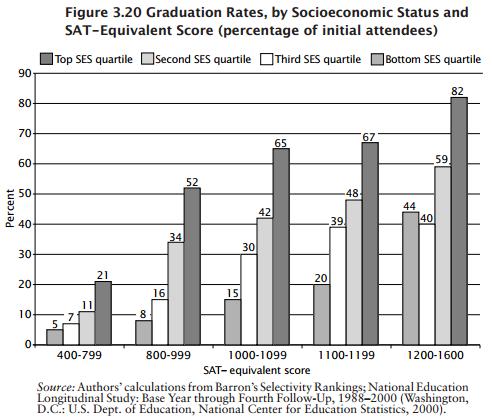 More than half of poor children who score very high in SAT do not finish college. The above data have been recently highlighted by Paul Tough in his New York Times article, "Who Gets to Graduate?": 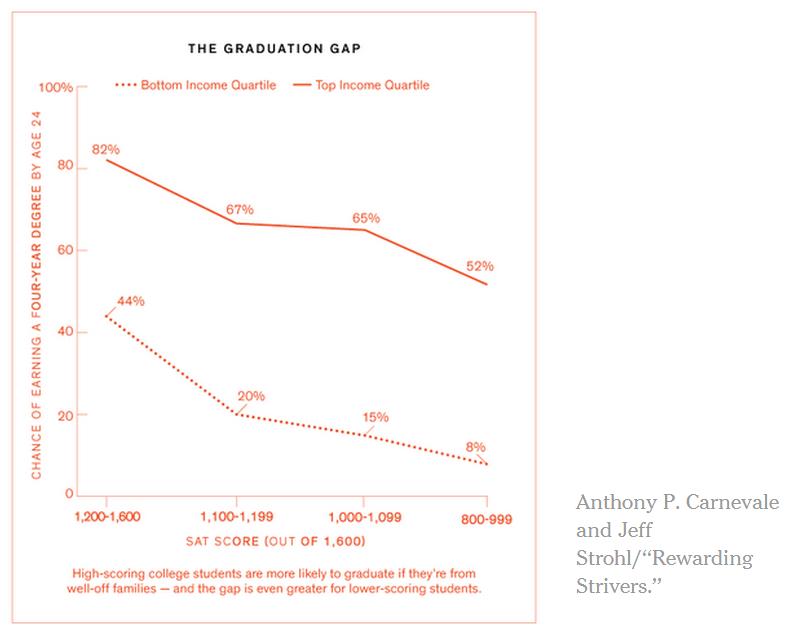 It is easy to explain why students with low SAT scores are not thriving in college. One can point to lack of ability. However, the fact that poor students who have the ability are as equally disadvantaged shows how far reaching the effects of poverty are on education.

I look back at my years at the Ateneo, a school where one can rub elbows with the children of the elite. I even got to share the same classroom with someone who is currently in the Philippine Senate, Aquilino "Koko" Pimentel III. With those years, and even now at Georgetown, I do ask the question whether I do belong. At the Ateneo, I started my first year in English classes where it seemed the final outcome of the term had been preordained. There was no way one could get an A and even a B was highly unlikely. Paul Tough talks about something similar from the University of Texas, an observation provided by Chemistry professor David Laude:


The default strategy at U.T. for dealing with failing students was to funnel them into remedial programs — precalculus instead of calculus; chemistry for English majors instead of chemistry for science majors. “This, to me, was just the worst thing you could possibly imagine doing,” Laude said. “It was saying, ‘Hey, you don’t even belong.’ And when you looked at the data to see what happened to the kids who were put into precalculus or into nonmajors chemistry, they never stayed in the college. And no wonder. They were outsiders from the beginning.”

Not having a sense of belonging is difficult. What this basically means is that with just a few mistakes, a low score in one test, a low score in one paper, a low grade in one course, a student can receive a loud confirmation that says, "Yes, you do not belong here." That alone can push a poor student to give up. Giving scholarships to poor but deserving students is obviously inadequate. School environments must change if gaps in higher education due to poverty are to be eradicated.