Are Filipino Students in the United States Smarter Than Whites?

Bernard Yves Bagalso, a son of first-generation immigrants from Paete, Laguna, Philippines, a town famous for its carvers and artists, won third place in the 2005 Hispanic Heritage Local Art and Essay Contest in the Washington DC area. Bernard won with an illustration that showed the many people Cesar Chavez helped. I do not have a picture of the winning piece but our home is blessed with one of Bernard's drawings: 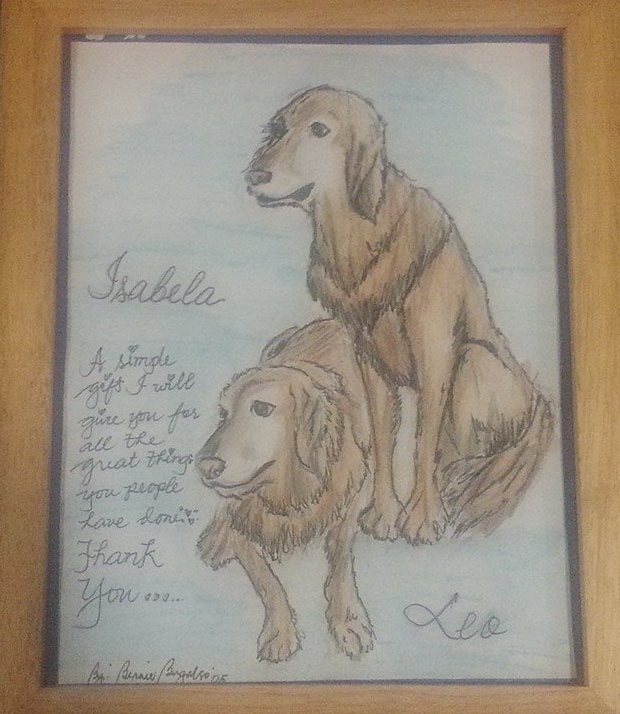 It is a drawing of our two golden retrievers. Bernard, who was 12 years old then, and his family were temporarily staying with us after they had left New Orleans because of hurricane Katrina.

It is not uncommon to hear children from Filipino families living in the United States to be doing quite well in their schools. At this time of the year, it is almost a certainty to see congratulatory posts on my news feed on Facebook highlighting academic achievements of Filipino Americans. This is not surprising. As a group, Asian Americans have high academic achievement and researchers seem to have begun to understand why. A recent article published in the Proceedings of the National Academy of Sciences (USA) describes results from two national longitudinal studies: the Early Childhood Longitudinal Study, which started in 1998, and the Education Longitudinal study, which was launched in 2002:

Thomas Sumner wrote the following in Science to describe the results of the above study: 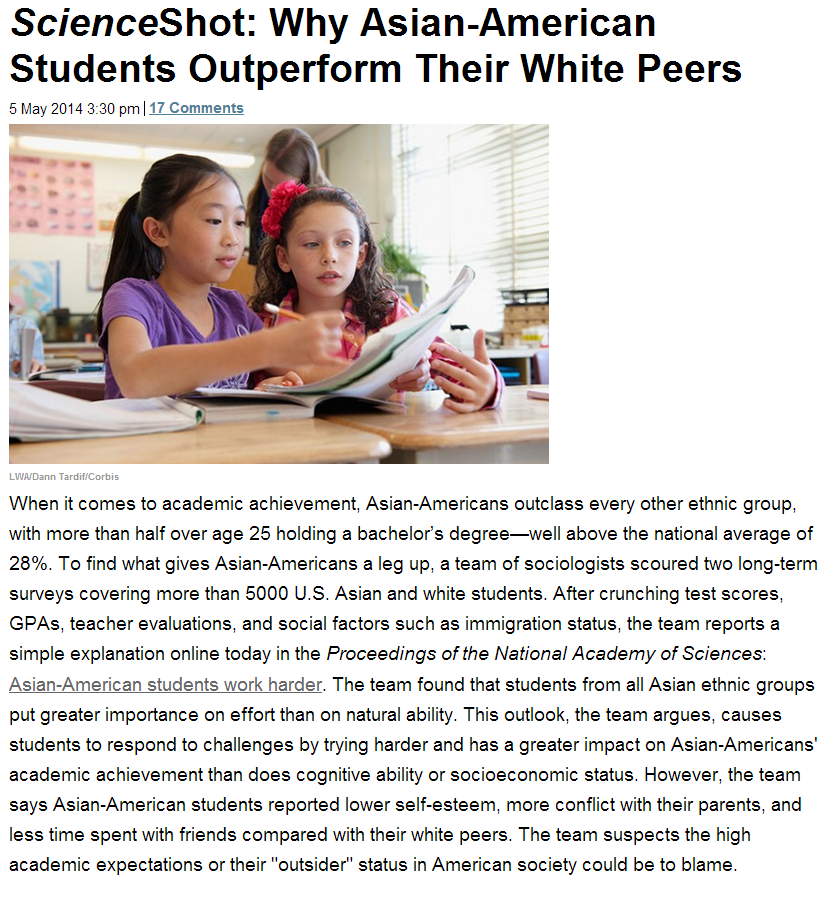 The study by Hsin and Xie was also able to collect data specifically for Filipino students in the United States. The following figure from the paper shows how students from the Philippines compare against other Asian Americans and Whites: 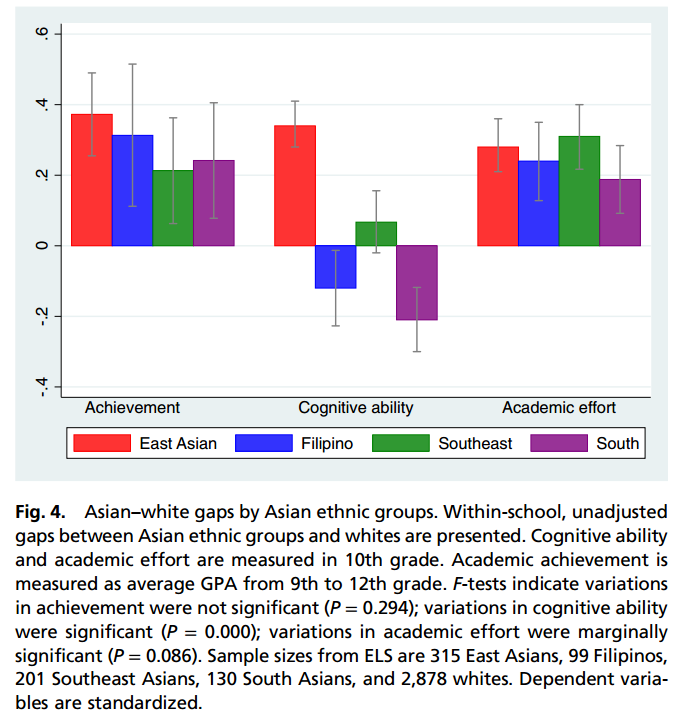 First, the data shown above are limited to within-the-same-school comparisons. The above differences are therefore conservative. These capture mainly the difference between the groups and avoid differences that arise from different school districts. From the data, Filipino Americans perform about 1/3 of a standard deviation better than whites. This is similar to how East Asians perform. However, when it comes to cognitive abilities, Filipinos like South Asians and unlike East Asians, do not score appreciably higher than whites.

Although the ScienceShot article emphasizes the fact that Asians emphasize effort, Hsin and Xie actually noted the following:


...the effect of culture wanes as youth assimilate to American norms over generations such that by the third generation, Asian Americans no longer differ from whites in terms of their educational profiles...

I especially would like to highlight the following paragraph: 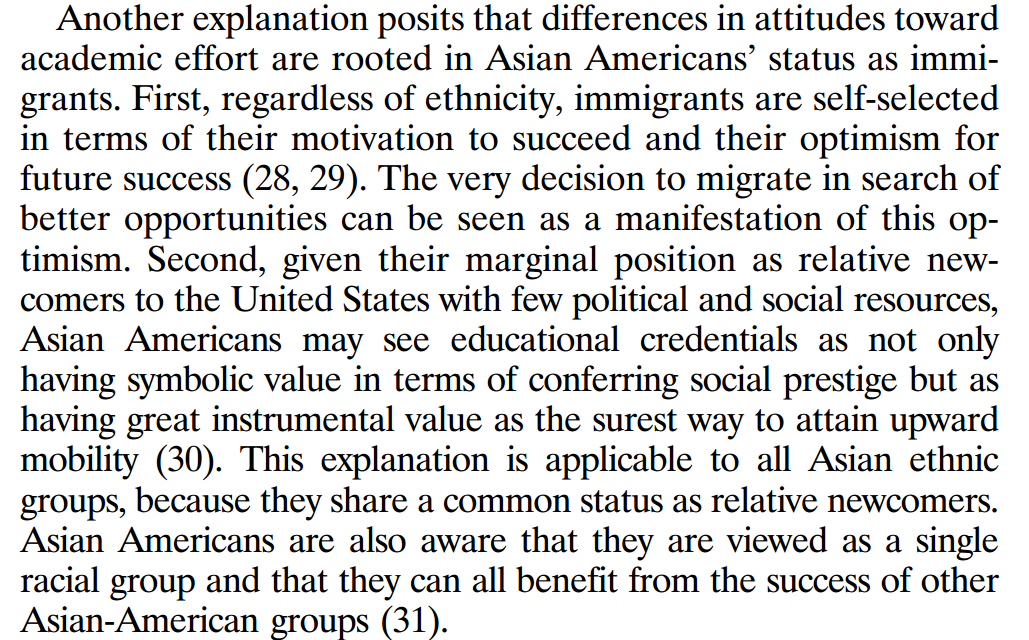 Thus, Asian Americans perform better in schools because they have to. Unfortunately, this better performance seems to come with a price. The paper also highlights another difference between Asian Americans and whites: 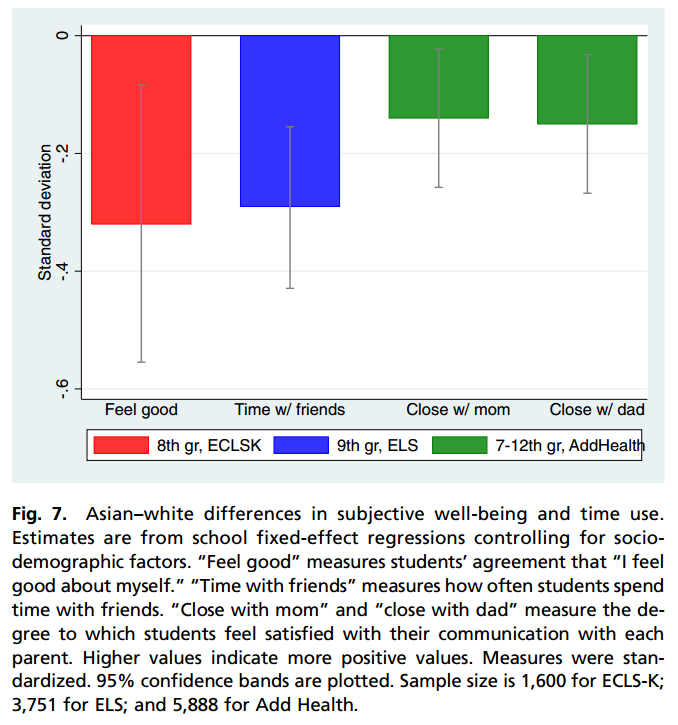