May 14, 2014
A law student at Harvard, Tyler Vigen, recently published a list of charts of correlations on his blog Spurious Correlations. Here are some examples: 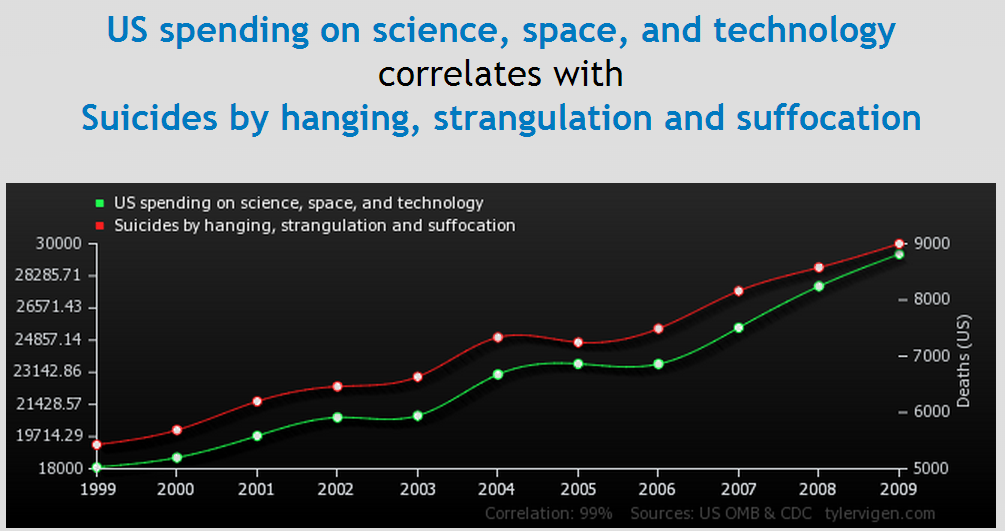 The above examples from Vigen are clearly "coincidental correlations".  There is no meaning to be gained from these correlations because there is no real relationship between these observations or events. No one really expects that seeing Nicolas Cage on the big screen makes people fall into swimming pools and drown. It is interesting to note that these "spurious correlations" involve human actions or activities. Education is a human activity so one has to be careful while drawing conclusions from correlations seen in education.

As mentioned in a previous post on this blog, "Correlations and Causation":


"These are examples of correlations. To establish causation, a mechanism is required to explain how one trend leads to another. One example is that immigrants in these counties take the education of their children more seriously. As a result, education attainment is higher in regions in the United States where there is a greater percentage of immigrants."


The above hypothesis (children of immigrants study harder) has been tested and results from a recent study were highlighted in a previous post, "Are Filipino Students in the United States Smarter Than Whites?". Showing that a correlation goes beyond just two events occurring in a seemingly synchronized fashion establishes a deeper meaning that can provide us with a better understanding of what works and what does not work, especially in human endeavors such as education.

The results for the 12th grade National Assessment of Education Progress exams in reading and math in the United States are now available. Unlike the 4th and 8th grade tests, these exams are still on a pilot stage. So far, only 13 states are included in this exam. This exam is particularly interesting since it assesses student learning at the end of K-12 in the United States. Of course, interesting correlations are present: 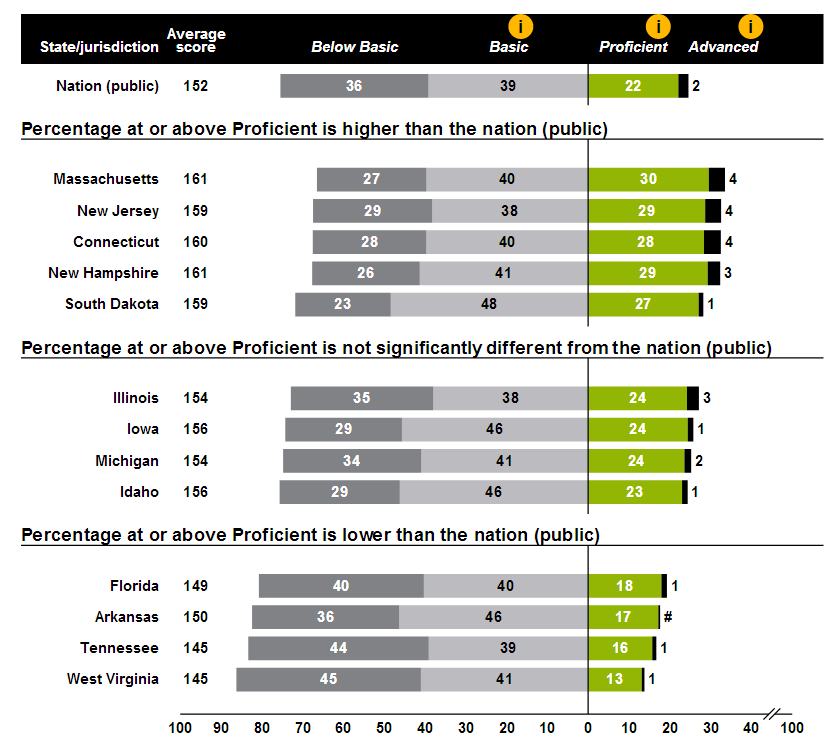 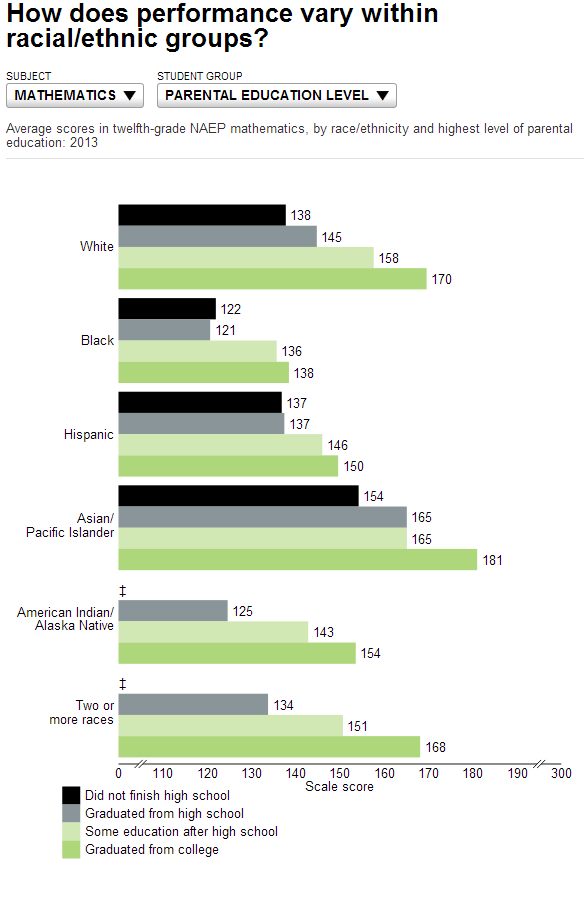 There are two factors here that are being correlated with a student's performance in the math exam. The first is race and a second factor is the parent's highest educational attainment. Within an ethnic group and this is true across all ethnic groups, a student's score correlates strongly with the education level of the parent. The same trend holds for the reading scores: 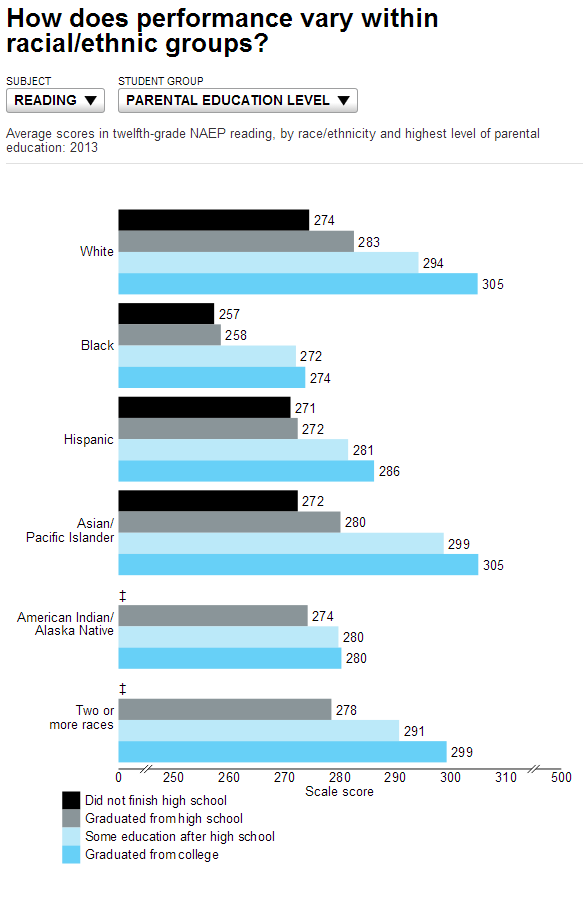 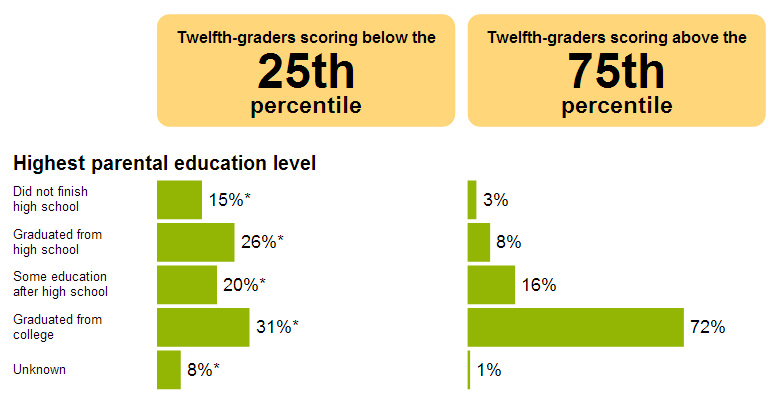 There may be a third factor, which likewise correlates with both parent educational attainment and student learning outcomes. That factor is household income: 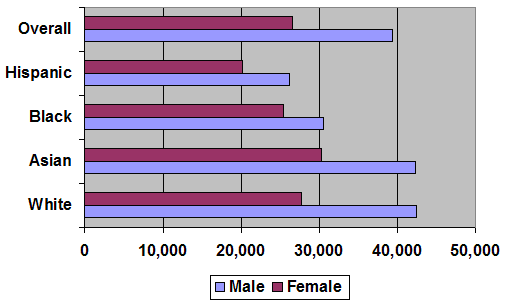 Thus, these correlations may be pointing at the same thing. Poverty crushes education. In a previous post, I wrote:


"...poverty deals a knock out combination on education. Poverty creates an achievement gap before formal schooling starts and schools that serve poor children are the ones often lacking in resources. Elite schools are limited to children of privileged families. Relying solely on market solutions to address poverty cannot succeed. An iron hand on markets is not advisable, but an obligation to protecting the poor, the most vulnerable of society, cannot be dropped. A free market economy as well as a healthy democracy requires an informed citizenry. Poor people often make bad choices. Their choices unfortunately have more severe consequences. Poverty does not allow for the right atmosphere required for proper choices and decisions to be made. Poverty crushes education. Basic education therefore must mitigate the harmful effects of poverty. Acknowledging that poverty harms education is a necessary first step in solving problems in basic education. The solutions are not cheap. Not taking actions, however, is more expensive. A healthy democracy is not possible with widespread poverty. And as Ravitch points out, addressing poverty is expensive, but is "not nearly as expensive as the social and economic costs of crime, illness, violence, despair, and wasted human talent.""