What Should We Teach in Kindergarten?

March 14, 2014
The Philippines added a compulsory kindergarten year in its basic education. This is a step in the right direction as studies have clearly shown that schooling before the elementary years are beneficial not just for acquiring social skills but also academically. Unfortunately, simply adding a year before grade school is not enough. Quality matters. Perhaps, this is now obvious. But even with quality in preschool and kindergarten, all of these efforts can still go to waste. We can certainly teach kids how to read and recite the alphabet or count from one to ten in kindergarten. But if first grade tries to do the same, then there is really no progress. A forthcoming article in the American Educational Research Journal shows that repeating basic content coverage in the early years of schooling provides no benefit:

To understand better the above research article, it is useful to take note of what the authors consider as basic and advanced contents:


"Given that all children benefit from more exposure to advanced content, it is important to consider what “advanced” means for kindergarten students. In mathematics, the items in our measure of advanced content cover topics such as addition and subtraction, place value, and ordinality. In reading, students benefit from phonics instruction, reading aloud or silently, and working on reading comprehension. In contrast, basic content in mathematics includes counting out loud, identifying relative quantity, and sorting into subgroups. Basic content in reading includes alphabet recognition, writing the letters of the alphabet, and writing one’s own name."

Children do step up to challenges and stagnation does not equal progress. Given the right circumstances, children can learn even topics that are conventionally regarded as far too complex. Take the theory of natural selection as an example. It is a difficult concept to grasp even for adults. But the difficulty may just be due to the fact that it took a long time before this theory was taught that students had already developed wrong notions about evolution. Thus, teaching this topic in high school requires not only introducing something new, but also correcting misconceptions. And intervention is usually much more difficult, if not impossible. Researchers at Boston University and the University of Toronto have recently shown that "YOUNG CHILDREN CAN BE TAUGHT BASIC NATURAL SELECTION": 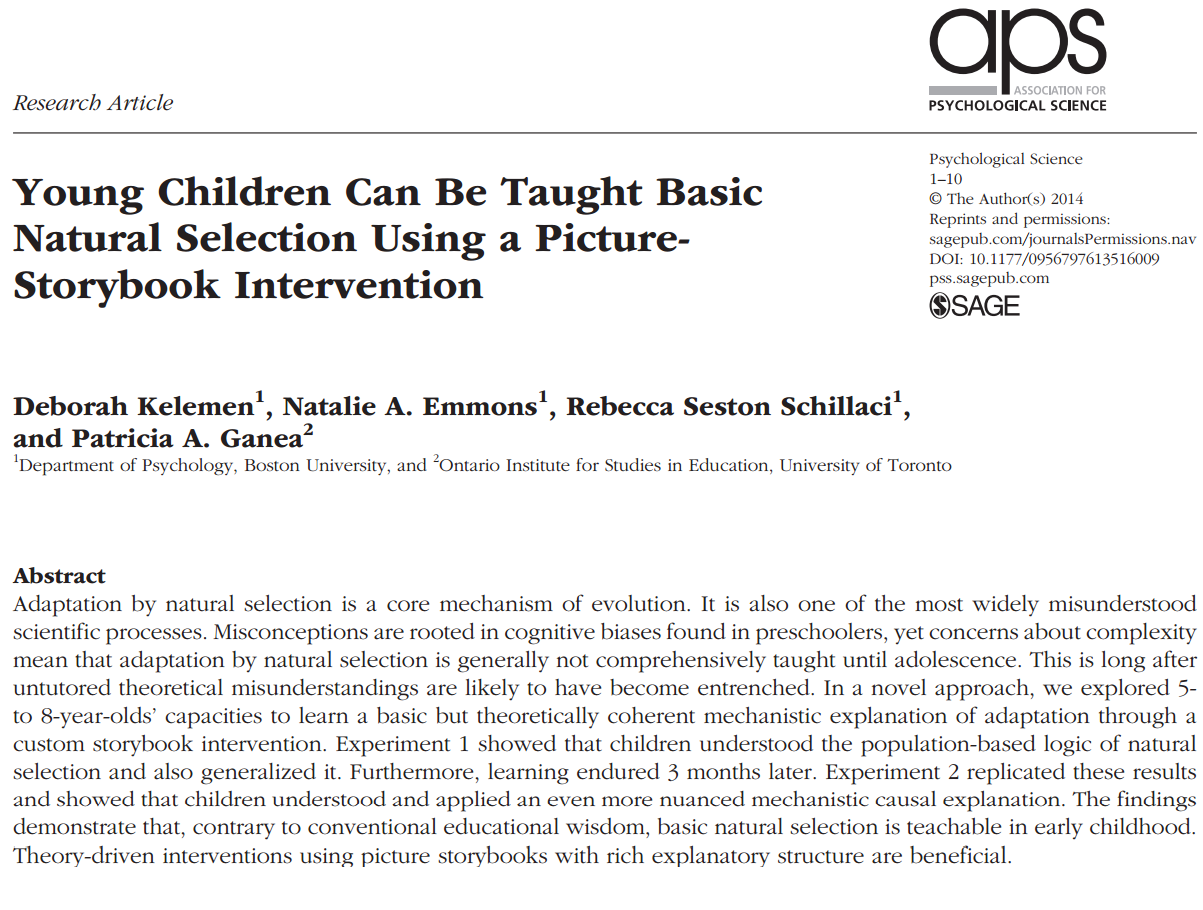 Daniel Willingham, who is now blogging for RealClearEducation describes the above research in simpler terms:


Researchers tested children aged 5 through 8. Kids heard a story about pilosas, fictional animals whose survival was threatened when their food source, insects, started to live below ground in deep, narrow tunnels. Pilosas have trunks which might be wide or narrow. The story went on to explain that in successive generations, trunks became less variable, as pilosas with narrow trunks survived and had young, whereas pilosas with wide trunks could not get enough to eat and did not reproduce.
Researchers tested comprehension of the story and children’s ability to generalize the biological principle to a new case. They were tested immediately and after three months. Each test included ten questions in all (five open, five closed) which probed understanding of different aspects of natural selection such as differential survival, differential reproduction, and the passing on of traits between generations.
7 and 8 year-old children showed good comprehension of the story, with nearly half showing an understanding of the natural selection in one generation and 91% showing at least a partial understanding. Remarkably, 3 months later, this knowledge transferred more or less intact to a story about a new species.

The day 2 testing shown above was actually performed three months after the original lesson, demonstrating very good retention and transferability.

Improving education really involves different levels. There is the number of years and instructional time. Another level is the curriculum, what should be taught during these times or years. In the end, what may really matter is how are things taught. The above illustrates that a complex theory such as natural selection is within grasp of young children. It simply has to be taught properly. And the above demonstrates that young children can be provided the complete story. A piecemeal approach which underestimates a child's ability to learn simply allows for developing misconceptions. A classroom where science is taught is not the only place where a child gets introduced to scientific theories. Outside the classroom is an infinite source of biases and misunderstanding.