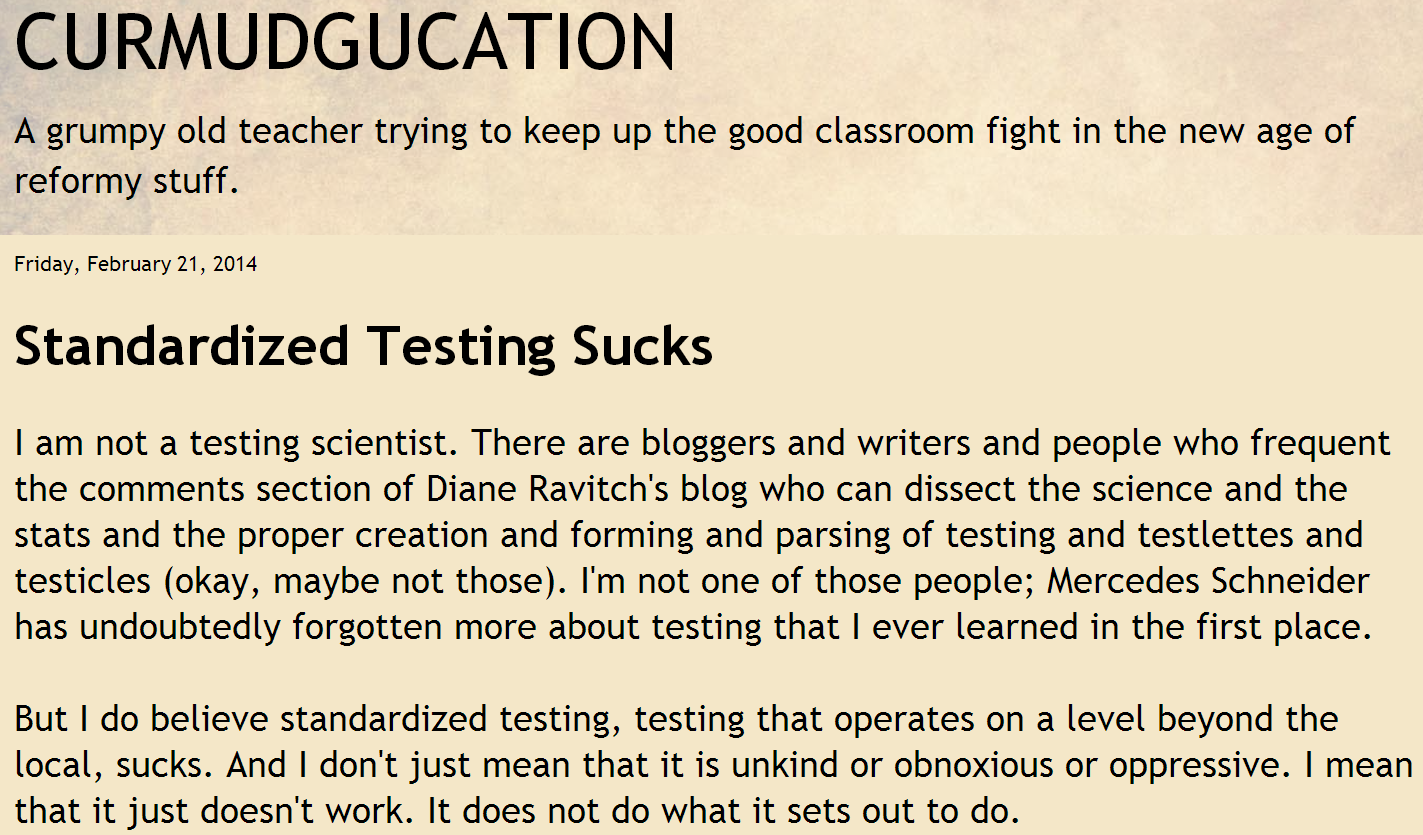 In the Philippines, the Alliance of Concerned Teachers has now called for abolition of the country's standardized exam, the National Achievement Test (NAT): 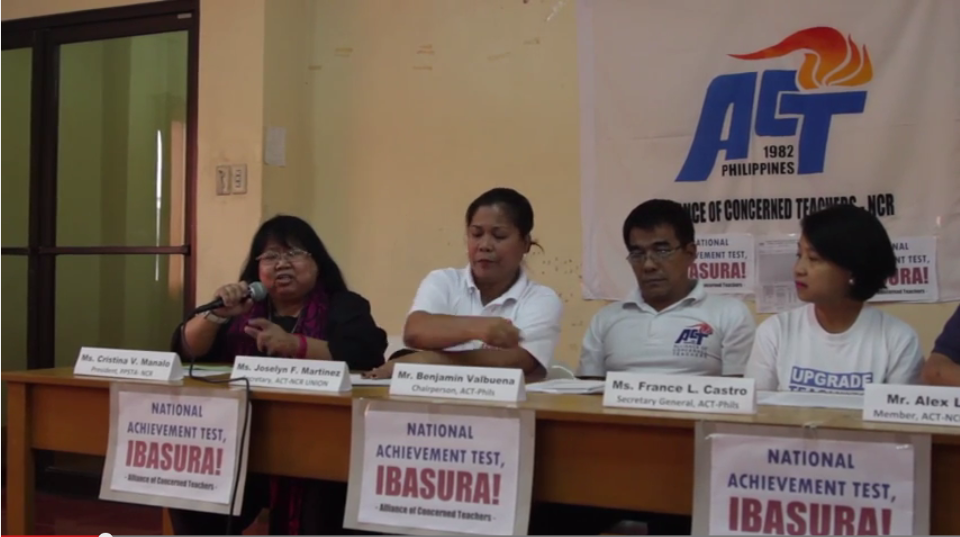 A coalition of private school educators, the Federation of Associations of Private Schools and Administrators (FAPSA), has joined the call to end NAT: 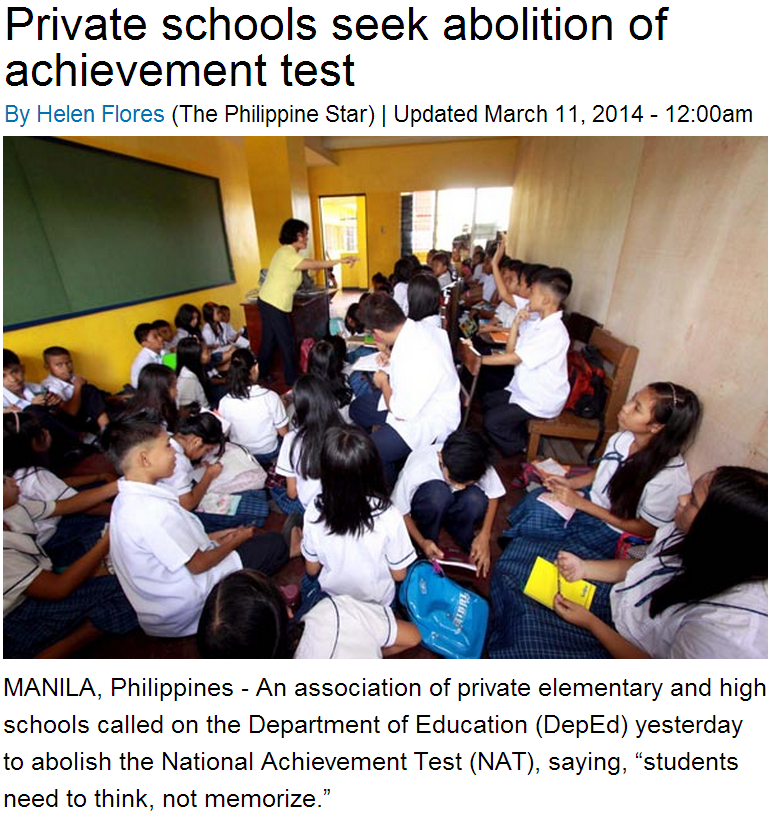 Some of the arguments laid out against the national exam are (1) standardized exams force schools to teach to the test (2) the assessment methodology is outdated, and (3) the exam is no longer secure and cheating is now occurring. But the strongest argument by ACT against the NAT can be summarized in one sentence, "The NAT results are not correctly used by education policy makers and the Philippine government." The National Achievement Test is now about two decades old yet scores in these exams have not changed. No change would have been good if the scores demonstrate that students in Philippine schools are gaining mastery of the skills and concepts tested. The big problem is that for over two decades, Philippine schools have been failing year after year, always ending with 10 to 20 points below the desired mark of 75 percent.

Cristina Manalo of ACT reiterates what is fundamentally wrong. The NAT as well as international exams have already shown that Philippine schools are failing. And throughout the past decades, education reforms have been introduced. Recently, the scores in these exams have been used to rationalize the new K+12 curriculum. The fact that performance in these exams has not changed means that education policy makers in the Philippines are clearly missing the point. Lack of resources and poor treatment of teachers are not addressed. These, according to ACT, are the factors that need to be considered to improve the quality of education in the country. Worse, NAT results are now being used to decide who among teachers will get a bonus. As Peter Greene of Curmudgucation says, "It does not do what it sets out to do."

Standardized exams are not necessary evil. After all, a recent study made by Hiss and Franks, "Defining Promise: Optional Standardized Testing Policies in American College and University Admissions", shows correlation between students' grades in college and their SAT scores:

The standardized exam is an efficient way of getting around a myriad of high schools and curricula. Back in 1999, the Association for Supervision and Curriculum Development (ASCD) in the US published a paper by W. James Popham, "Why Standardized Tests Don't Measure Educational Quality". Popham begins with reminding us of the real purpose of a standardized test: 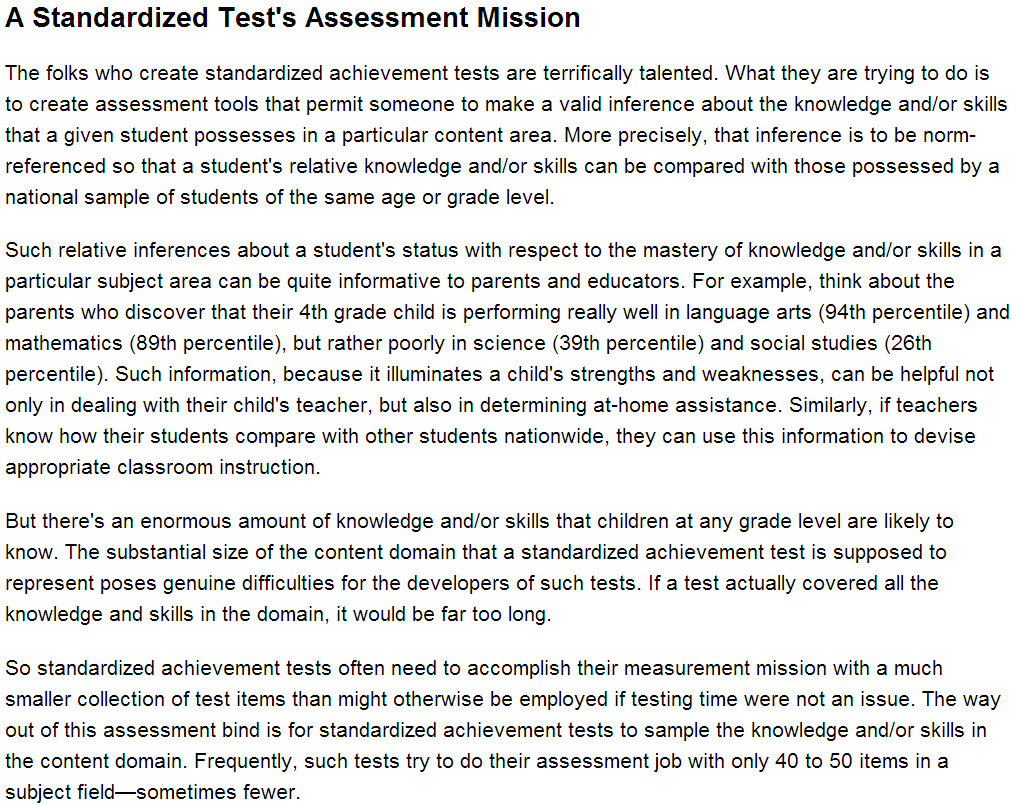 According to Popham, the biggest reason why standardized tests do not measure quality of schools is the fact that a student's performance on such an exam is not decided mainly by what a student does inside the school. This is one reason why ACT is correct in demanding the Philippine government not to use NAT scores to decide who among the teachers would get a bonus. A student's score in this exam is influenced by (1) what's taught in school, (2) a student's native intellectual ability, and (3) a student's out-of-school learning. Popham illustrates this by showing specific sample test questions: 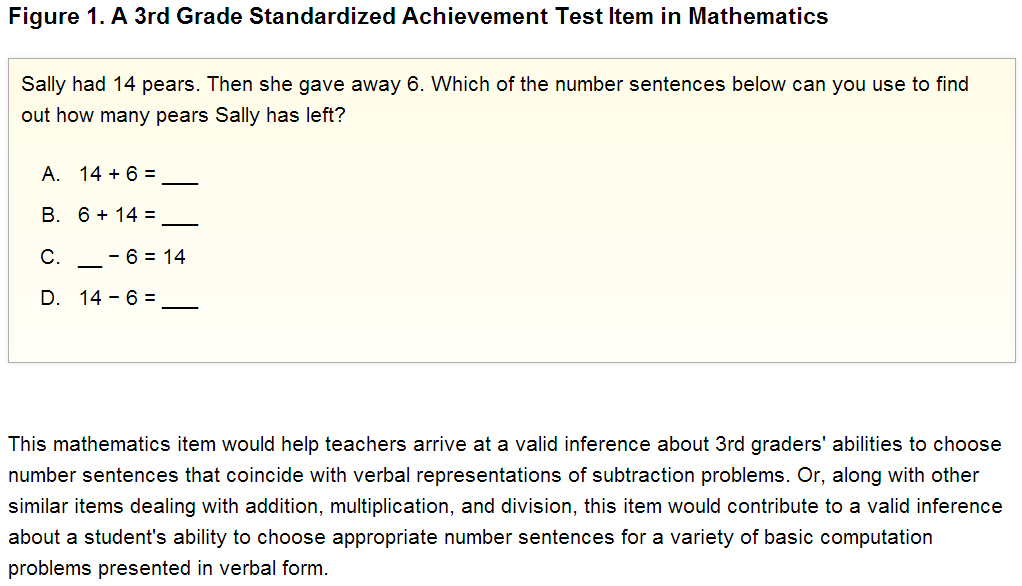 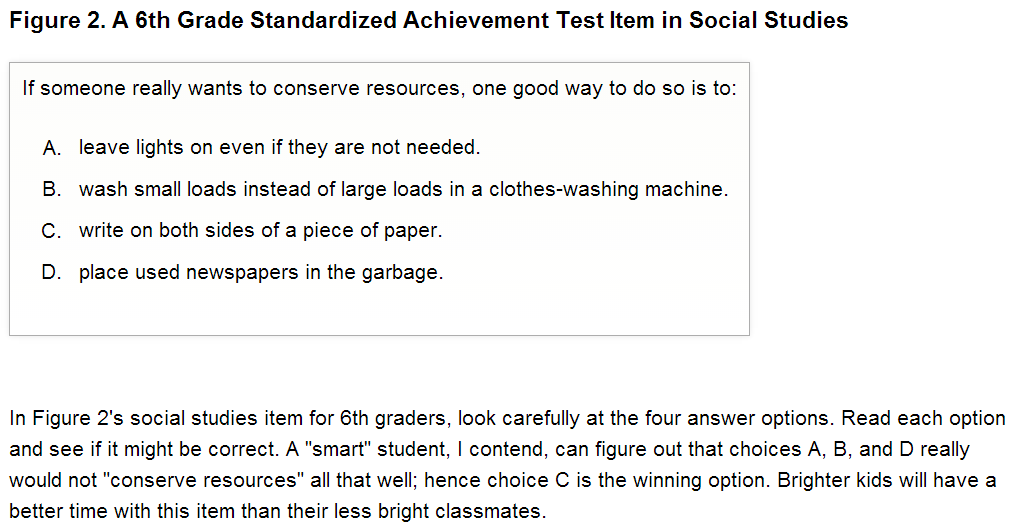 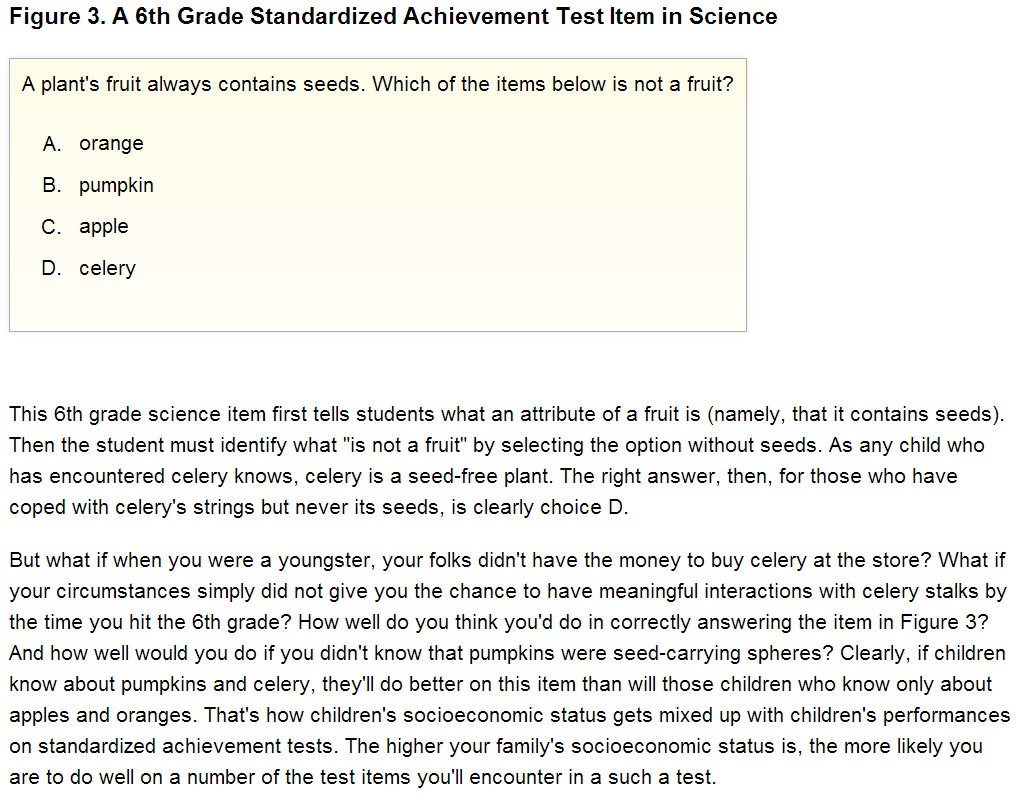 Standardized tests do measure something. With regard to the Philippines, the standardized tests are saying that schools are failing. Such conclusion does not demand great accuracy or precision from a test. This is not drawing a line between an "A" student and a "B+" student. This is simply between "pass" and "fail". It is true that multiple choice exams are not that accurate, but if given four choices for each question, a student still manages to score below 25 percent, something is wrong. And if the scores are not changing year after year, something is wrong, and whatever is wrong is still there.