ACT Representative on DepEd's K to 12

October 18, 2012
Here are some of the recent tweets from ACT_Teachers: 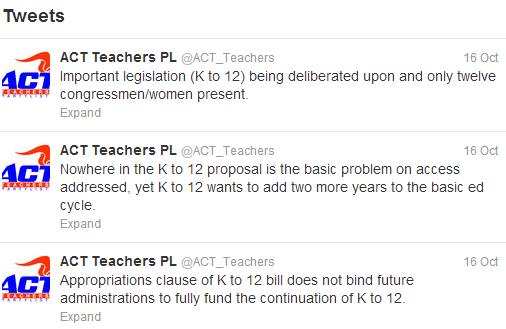 And here is the press release from the Alliance of Concerned Teachers:

Reference: ACT Teachers Party-List Antonio Tinio (09209220817)
http://www.act-teachers.com/teachers%E2%80%99-solon-slams-railroaded-ok-of-k-12-bill-on-2nd-reading/
ACT Teachers Representative Antonio Tinio lambasted the approval on second reading, without amendments, by the Lower House of HB 6643, the Revised Basic Education Reform Act of 2012, over objections on the lack of preparation for and commitment to fully fund the K to 12 program.
Tinio revealed that during committee and plenary deliberations, the bill’s proponents failed to prove that the Department of Education (DepEd) is ready to effectively implement the entire program.  He scored in particular the perennial problems on teacher, classroom, textbook, and other resource shortages which impede children’s access to education.
“For the K to 12 reform program to significantly improve the quality of basic education, it must first solve existing shortages.  Sadly, there is no indication anywhere in the bill of the intention to do so,” Tinio lamented.  “With the creation of 61,510 teacher items, the Aquino administration will halve the current teacher shortage but K to 12 proponents failed to show that this en masse hiring will be sustained in the coming years.  And how about the other critical resources?”
TInio added that DepEd has not yet fully developed and tested the new curriculum for all the grade levels including Kinder and the additional two years of high school.
During plenary debates Tuesday, Tinio argued that the bill’s appropriations clause, a standard provision usually cut-copy-pasted by lawmakers in drafting bills, is insufficient to bind the Aquino and succeeding administrations to fully fund the program.  Instead, the bill’s provisions reveal the intention to let private sector fill up the gaps in public education system.
More students will be forced to enrol in private schools due to bloated class sizes, lack of teachers, and others and government will incentivize their admission through subsidies such as GASTPE and the voucher system.  Classrooms, on the other hand, will be built through PPP, proven in other countries to be more expensive in the long run than public funding.
“Reliance on these forms of privatization reveals Aquino’s plan to use K to 12 to privatize education, make it more prohibitive for majority of Filipino children, and deprive them of their right to accessible education,” Tinio warned.
Tinio feared K to 12 bill’s hasty approval on final reading once session resumes in two weeks, as its proponents did not consider the valid points he and other oppositors raised during committee and plenary debates.  However, he vowed to continue pushing for further preparation and greater funding for any education reform program.
Commentaries Education Reform Teacher Groups Teaching