What Student Activism Must Accomplish

February 25, 2018
When education works, we can see it. Some say activism is part of education. It is, provided that the experience leads to a greater understanding of how a society functions, what challenges are to be faced, and how actions or protests can become effective for progressive change. In 1986, the Philippines witnessed a dramatic change in government. It was the defense secretary and one of Marcos' generals who first led the withdrawal of support for the old strongman of the country. The duo then received the protection of the public as protesters began to flood a major roadway in Manila. More than thirty years later, protests are still held. This time, they are voicing once again, against multiple issues. The number of issues, however, cannot hide what is really in the mind of the leaders of the protest, removal of the current president. Activism in the Philippines, sadly, has always been cast as a quest for power. In this light, student activism becomes not a part of good education, but merely as a manifestation of our misunderstanding of what democracy is.

Across the Pacific, there is a student movement that serves as an exemplar. One of its leaders, David Hogg, has been appearing in several cable shows. And so far, some have already started compiling accomplishments by students from Marjory Stoneman Douglas High School in Parkland, Florida. One compilation is made by journalist Isaac Saul. 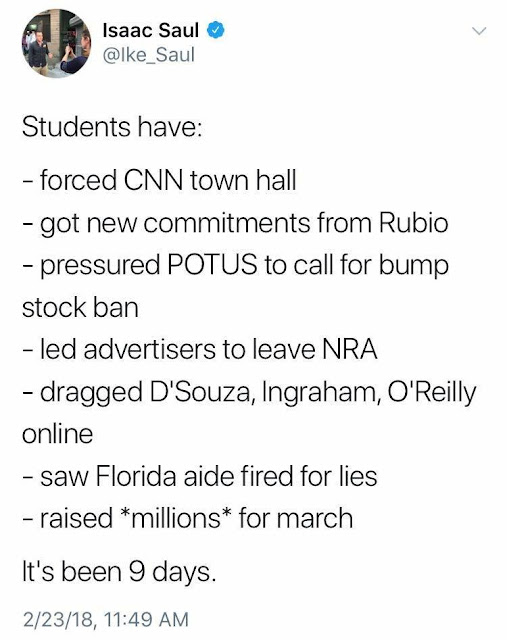 
“The thing that I hate most about that is the members of the NRA that these people are supposed to be representing. 99.9 percent of the people in the NRA are amazing Americans who want to stand up  for what they believe in. I respect that. It’s the people at the top of the NRA who responsible for this. Think about it. You can create a positive feedback loop with the more violence you create, the more guns you sell because people become afraid. What’s growing here is the amount of gun sales in this country. That’s what the NRA is trying to serve at the top – not it’s members.”


This current student movement in the United States focuses on an issue that involves the safety of their own schools. What the students want to accomplish is clear and they are navigating correctly mechanisms provided by democracy.

Students in the Philippines, on the other hand, are singing the same tune:

”Let us walk out of our classrooms and fill the streets once more as a symbolic action of dissent and protest against the US-Duterte administration."

The protest is predictable. It is always against a "US-_________ administration". One simply can fill in the blank with the last name of the current president. This is not good education. These protests are only aimed at destabilizing the government and disrupting the public. Democracy is never about loud mouths who can speak only of changing people in power, but never engaging in a dialogue that can effect change for the good in a society. All it does is to provide launching pads for some students to become either notorious or popular at the expense of the public.